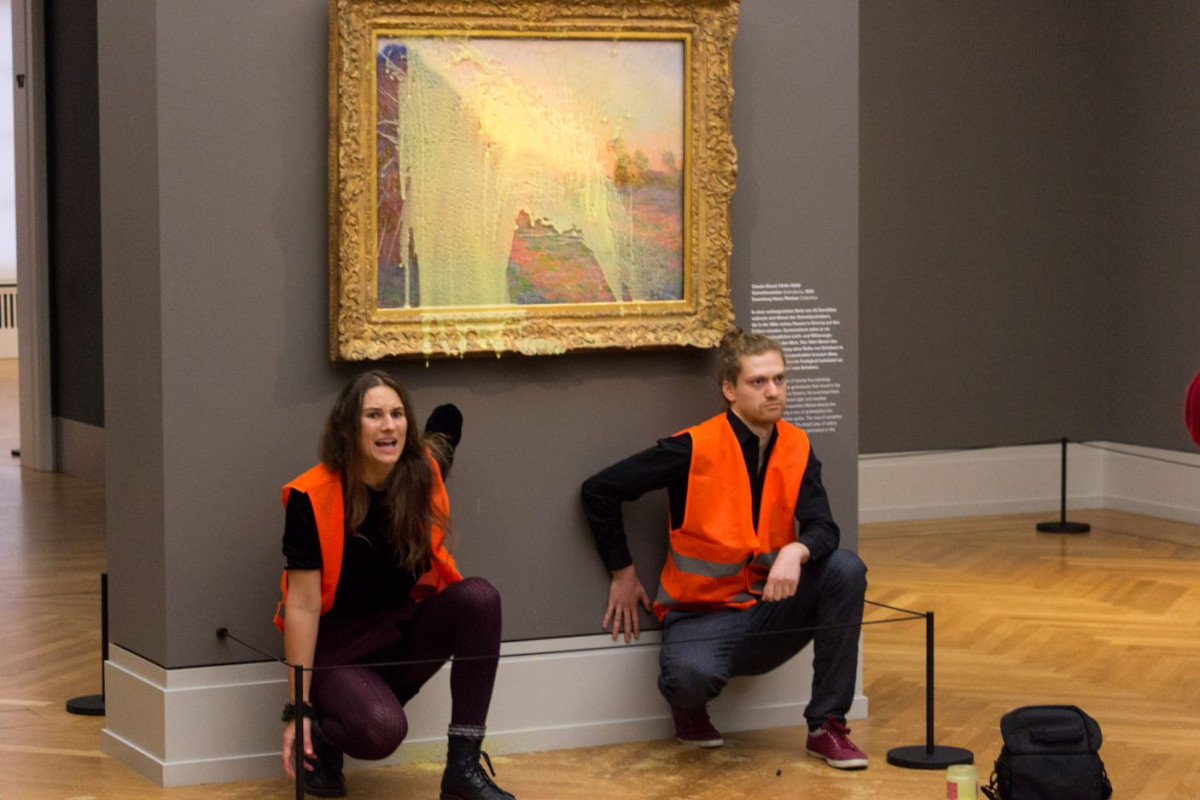 Last Generation activists threw potato soup at a painting in a Potsdam museum and glued themselves to the wall. Image by Last Generation

With motorway and airport blockades as well as attacks on artworks, climate activists have caused a stir in Germany. The actions have provoked mainly negative reactions from politicians, the media and the general public, following overwhelming sympathy with the broader Fridays for Future movement. Many conservatives call for harsh punishments, with some even likening the activists to terrorists, while left-leaning observers have shown some degree of sympathy, but warn the escalation of protest methods is counterproductive. Researchers say the actions are an expression of growing frustration and diversification within the climate movement, which is struggling to find resonance during the energy crisis. But they don’t see a general trend towards a radicalisation of the broader climate movement.

With ever more spectacular protests, climate activists have sparked an intense debate about the legitimacy of civil disobedience in the name of climate protection in Germany. As the actions of protest group Last Generation moved from motorway blockades to food attacks on paintings, and most recently caused disruptions at Berlin’s airport, rejection of their more “radical” methods has become ever more virulent and calls for harsh punishments louder.

Activists have been arrested in rapidly increasing numbers and several of their homes raided by police, as polls show that an overwhelming majority of the public has a negative view of the protests. Some conservatives have even warned of a nascent climate terrorism movement.

The largely critical reactions to the Last Generation actions stand in sharp contrast to the largely sympathetic views on previous years’ - comparatively tame - protests by the youth climate movement Fridays for Future, which are widely credited with forcing the government to step up its climate efforts.

The radicalisation of parts of the climate movement is not limited to Germany. In recent months, direct action groups across Europe  have taken aim at celebrated artworks to highlight their call for more decisive climate action, for example in London and The Hague, and blocked airport operations, for example in Amsterdam.

A street blockade in Berlin. Image by Last Generation

Last Generation activists, who originally focused on preventing food waste, first attracted wide media attention with a hunger strike in the runup to Germany’s 2021 federal election, when they demanded public meetings with the chancellor candidates. The group chose the name Last Generation to signal their belief that they are part of the last generation that can prevent “climate collapse.” In early 2022, they started making headlines with civil disobedience actions, such as motorway blockades. More recently, they expanded their actions to symbolically targeting artworks, smearing the German government coalition parties’ headquarters, and blocking the runways of Berlin’s airport.

Last Generation remains much smaller than the Fridays for Future youth movement, which played a crucial role in advancing Germany’s debate on climate action and pushing parties across the spectrum to committing to policy in line with limiting global warming to 1.5°C. Referring to Swedish climate activist Greta Thunberg, who inspired the movement, even previous German chancellor Angela Merkel cited the so-called “Greta effect,” and credited Fridays for Future ​​for pushing her government to take swifter and more resolute action.

At its peak in Germany in late 2019, the group said 1.4 million people attended its demonstrations in the country during a global climate strike. But participation numbers have dwindled since then, while climate activist groups have been losing sympathy in German media since the end of 2020, as reporting on them turned more negative. 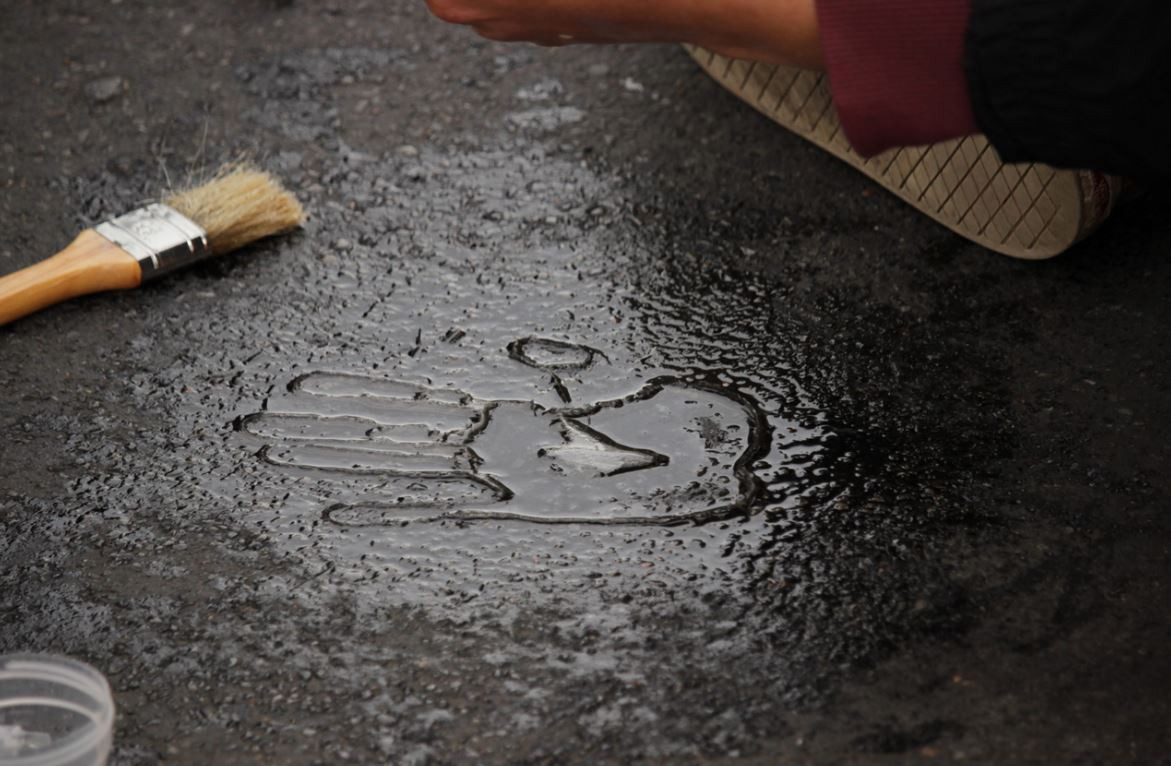 The activists have often glued themselves to the road. Image by Last Generation

Politicians are also unified in their blanket rejection of the actions. But while certain Social Democrat (SPD) and Green politicians still expressed some degree of sympathy, conservatives (CDU/CSU) have been much more damning.

Chancellor Olaf Scholz (SPD) called for acceptance of critical attitudes and protests in general but criticised Last Generation’s methods. “There are other ways in which people can express their opinion," Scholz said, adding it was obvious the actions haven’t been met with widespread approval. Green vice chancellor and economy and climate minister Robert Habeck said that "those who risk the health and lives of others with their protest forfeit all legitimacy and also damage the climate movement itself."

Conservative opposition leader Friedrich Merz (CDU) said the activists committed “the most serious” offences: “These are not climate activists, they are criminals.” Christian Social Union (CSU) parliamentary group leader Alexander Dobrindt even warned of a nascent climate terrorism movement. Referring to Germany’s Red Army Faction (RAF), an extreme left guerrilla group that killed more than 30 people in Germany in a series of bombings, assassinations and kidnappings between the 1970s and 1990s, Dobrindt called for harsh punishments to prevent a “climate RAF.” The comparison drew wide condemnation, even from some conservatives. The CDU/CSU group tabled a motion in the Bundestag to "punish street blockers and museum rioters more severely," but it ultimately gained little support, given that the majority in the government coalition is held by the SPD, the Greens and the Free Democrats (FDP). The head of Germany’s Federal Office for the Protection of the Constitution, Thomas Haldenwang, said the activists should not be considered “extremists” because they didn’t question the country’s democratic order. However, the interior ministers of the Germany's federal states agreed in early December to monitor the group more closely.

In conservative CSU-led Bavaria, police took Last Generation activists into preventive detention to prevent new protests. But the measure was widely criticised by media and other parties, which argued that the move was disproportionate, given that the group’s actions constituted only minor offenses.

Undeterred by the broad rejection, the activists defended their methods. “We already see that democratic resistance is having an effect. We see that we, our protests and actions against climate collapse, are being talked about everywhere: at this country's dinner tables, in the courtrooms, on talk shows and in political bodies,” Last Generation said. “But attention is not our goal. Being unignorable is necessary. But political change is what it will ultimately take and what we will achieve.”

Numerous researchers doubt that the protests will achieve their aims. The scientific director of the Potsdam Institute for Advanced Sustainability Studies (IASS), Ortwin Renn, questioned whether the protests are effective - partly because actions, such as damaging artworks, have no direct relation to climate issues. But he also argued that the protests should not be considered “radical,” given the urgency of the climate crisis. “When the survival of humanity is directly at stake, gluing yourself to streets and museums is of course rather proportionate to the threat,” Renn said.

Sebastian Haunss from the University of Bremen’s Social Policy Research Centre also said that “it is an exaggeration to speak of a radicalisation of the climate protests.” He said there is no general tendency towards confrontational forms of protests within the overall movement, adding that Last Generation’s protests represent “only very limited transgressions of the rules” because they don’t attack people directly and usually cause only minor property damage. Haunss cited football fans as a counter-example, saying the extent of violence and property damage on Bundesliga match days is likely significantly higher. He also said the climate movement’s demands have not radicalised, with the main goal being the compliance with the Paris Climate Agreement - “a fairly moderate demand.”

It remains to be seen whether the actions will ultimately harm climate action, according to researchers. Simon Teune from Berlin University’s Institute for Protest and Movement Research said it was unlikely that the protests will undermine the population’s broad backing for climate action. Support does not extend to all climate activists’ actions, but it is unlikely that backers will turn away from wanting good climate policy because they disagree with individual activities, he said. But social movements researcher Dieter Rucht from the Berlin Social Science Center told CLEW earlier this year that disruptive protest actions undertaken by a few risks ostracising people who already support more progressive climate policies. 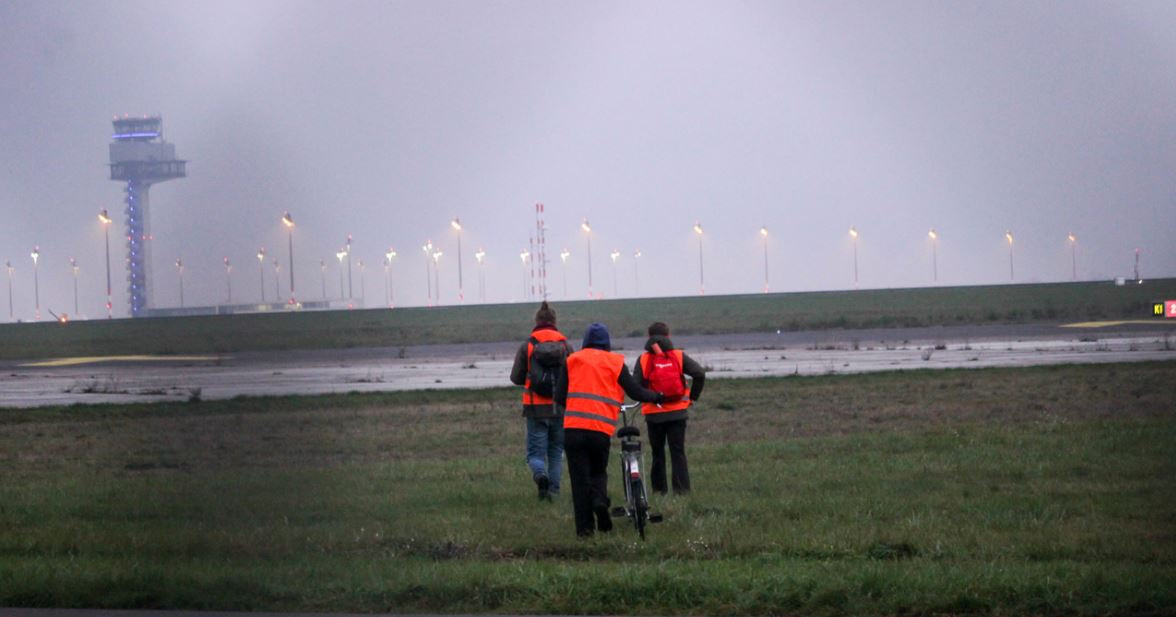 Haunss said the actions are an expression of a “differentiation of protest forms within the climate movement.” Other researchers also pointed to frustrations within the overall movement. “The initial euphoria and widespread trust in political institutions to work out climate-friendly solutions have given way. Today, frustration and despair are more dominant emotions,” Teune said. “In the beginning, coal-fired power generation was an important focus and a field in which a reasonable climate policy was relatively easy to communicate. At the moment, it is unclear where best to focus energies.”

The Fridays for Future movement expressed frustration with media coverage of Last Generation actions but stopped short of criticising the group. “Unfortunately, the focus is rather on their forms of action instead of their motivation and the climate crisis,” spokesperson Darya Sotoodeh told Clean Energy Wire. “Civil disobedience, especially peaceful one, has made essential contributions to improving our societies. The climate justice movement consists of various groups with different forms of protest. We have the same goal, and everyone can participate in the movement according to their capacity.”

Sotoodeh said the main goal of the overall movement remains to unite as many people as possible to put pressure on the government. Referring to other parts of the movement, for example those occupying a western German town slated to make way for a nearby coal mine, she added: “There are groups that have been active for years or even decades. We support each other whenever we can.”

Researchers said the consequences of the war in Ukraine posed difficult challenges for the climate movement, as many citizens struggle to make ends meet because of rising prices, and policies designed to fight the crisis partly run counter to their demands.

Jérémie Gagné, senior associate at More in Common, an initiative fostering more united and inclusive societies, said the current inflation crisis rapidly increases the population’s feeling of living in an unjust society. This “naturally complicates the emotional starting point for debates on how we shape climate protection,” Gagné said. More in Common found in their surveys that people want climate protection, but they object to individuals and groups being played off against each other. The crisis is sowing doubt in society’s ability to act jointly in the climate crisis, while people’s outlooks have become very unstable, Gagné said. “People are very exhausted. This feeling, this need to return to normality, is very much in the majority and people are a bit at the end of their tether with crises.”

Other researchers also point to overall acceptance of the government’s crisis response, which included restarting coal power plants and building new infrastructures for importing natural gas. “The Russian war of aggression on Ukraine and the resulting energy shortage is a problem for the climate justice movement, because in the medium term there is a threat of a renewed commitment to fossil fuels from other sources. The climate justice movement's criticism of this development has not had a broad resonance,” Teune said.