A typical electric car today produces just half of the greenhouse gas emissions of an average European passenger car over its life cycle of manufacturing, fuel cycle and use, writes the International Council on Clean Transportation (ICCT) in a review comparing several studies. There was a wide range of values found in these studies, which indicates the degree of uncertainty in assessing life cycle emissions and the variety of methods and materials used in manufacturing batteries, writes the ICCT. The relative benefit for e-cars varies greatly in different countries, depending on local electricity production. An electric vehicle’s higher CO₂ emissions during the manufacturing stage are paid off after only two years compared to driving an average conventional vehicle. “This emissions recovery period is no more than three years even in countries with relatively higher-carbon electricity such as in Germany,” writes the ICCT. In markets with very low-carbon electricity, such as Norway or France, electric vehicles produce less than a third of the life cycle emissions of an average combustion-engine vehicle. 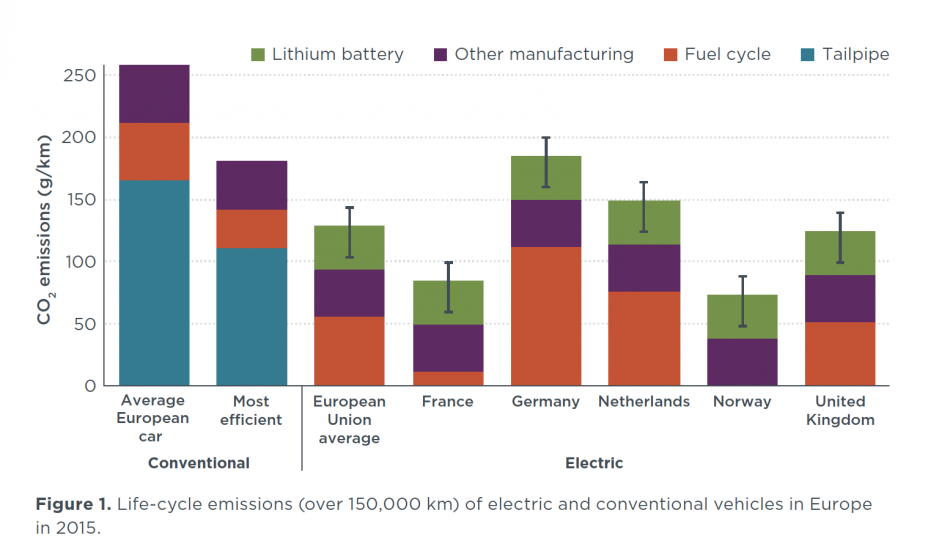 Find the briefing in English here.

For background on the car industry, read the CLEW dossier The Energiewende and German carmakers and this CLEW interview with the ICCT’s Peter Mock.

Digitalisation of the Energiewende in danger of failing

Key IT projects necessary for the digitalisation of the German energy transition are making no headway, endangering the “ambitious large-scale project”, journalist Peter Welchering told German radio broadcaster Deutschlandfunk. These projects included connecting charging points for electric vehicles, managing the distribution of renewable energies, and optimising electricity consumption. “Without the digitalisation of the Energiewende, we’ll neither have e-mobility, nor a stable power supply in the future, nor will we be able to reach climate targets,” said Welchering.

Read the article on radio piece in German here.

For background, read the CLEW dossier The digitalisation of the Energiewende.

German car manufacturers are “world champions in restoring the past”, but are not able to come up with new basic ideas for a radically changing world, writes Sebastian Matthes in an opinion piece in Handelsblatt. German engineers optimised the combustion engine to the last detail, and many car manufacturers “mainly administer past ideas” today. Companies like Tesla or Byton were in the process of re-inventing the car and “questioning all laws of the old mobility world”. The issues in the German car industry is but a harbinger for issues of the German economy in general, writes Matthes.

Read the opinion piece (behind paywall) in German here.

Chinese grid company SGCC’s plan to acquire 20 percent share in Germany’s transmission grid operator 50Hertz worries German politicians and could refuel the debate on establishing a state-run transmission grid company, reports the Handelsblatt. It was a big mistake “to turn power grids into sources of profit of arbitrary private investors from Germany and abroad” when the transmission grid was divided between four companies ten years ago, Oliver Krischer, deputy head of the Green Party’s parliamentary group, told Handelsblatt. Bernd Westphal, Social Democratic (SPD) energy spokesman, said: “In principle, there’s nothing to say against foreign investors, of course. But there must not be a sell-out of critical infrastructure.” Christian Democratic Union (CDU) parliamentary group deputy head Christian Hirte said that the developments at 50Hertz would be “closely watched”.

A provision on financial support of commercially used electric vehicles in Germany’s coalition agreement could boost the production of e-vans, Jürgen Pander writes on Spiegel Online. In the treaty that still hinges on the approval of the Social Democrats’ (SPD) party basis, the would-be governing parties SPD and Chancellor Angela Merkel’s conservative CDU/CSU alliance agreed to support commercially used e-cars with an asset write-down of 50 percent in the year of the purchase, Pander says. Commercial vehicle manufacturers like VW, Daimler, Ford or Iveco “have realised” that small e-vans of up to 3.5 tonnes payload “do not only make sense but are also demanded by many companies”. For commercially used e-vans, the still limited range of electric cars is less of a problem than for many other cars since they usually drive less than 100 kilometres per day on predefined routes in inner cities and can be routinely charged in the company’s depot overnight, Pander argues. Researcher Lukas Minnich, of the Institute for Applied Ecology (Öko-Institut), adds that “the greatest driver in demand for e-vans is the fear of looming driving bans for diesel cars in inner cities”.

Many economic models are based on the assumption that energy only contributes about five percent to production outcomes and that it can be substituted with one of the other factors such as labour or capital, Norbert Häring writes in Handelsblatt. He quotes economist Dietmar Lindenberger from EWI Cologne, who says that models about future production should incorporate the physical reality that energy plays a central role that cannot be substituted.

The go-kart track where former German Formula 1 race driver and motorsports icon Michael Schumacher learned his trade is to fall prey to the expansion of the lignite mine Hambach of energy company RWE, public broadcaster WDR reports on his website. The circuit called Erftlandring, which also successful German race driver Sebastian Vettel used for practice will be sold to RWE, the go-kart race club in the city of Kerpen decided “after a long and controversial debate,” WDR writes. The Erftlandring will stay open until 2020 and the club owners vowed to find an alternative location in the region, the article says.