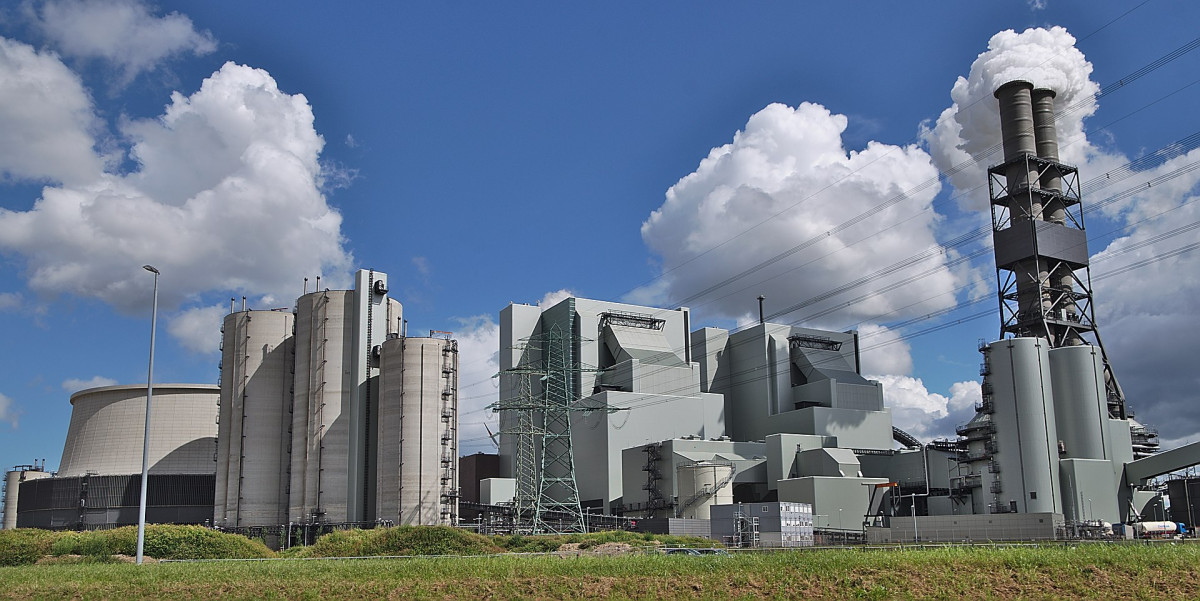 The Moorburg plant in Hamburg was opened in 2015 and will go offline only six years later. Photo: Beochek / wikimedia

The first auction for the decommissioning of hard coal plants in Germany has been hailed as a success both by coal plant operators and climate activists, as it ensures that plants with a capacity of almost 5 gigawatts will be off the market by the end of the year as planned. The successful bid by operators of plants inaugurated as recently as 2015 is seen as confirmation of coal power's increasingly difficult market situation. It has also led to renewed criticism of Germany's overall coal exit plan, as much older and dirtier lignite plants will keep running well after younger plants have gone offline.

The first round of auctions for the decommissioning of Germany's hard coal plants has been met with keen interest by the country's coal companies, leading to a clear oversubscription of the auctioned 4 gigawatts (GW) of capacity. The Federal Network Agency (BNetzA) has awarded bids with a total capacity of 4.78 GW, with the average bid being "significantly below the legal maximum price”, BNetzA head Jochen Homann said. Among the installations that will now be taken offline in 2021 are both blocks of the Moorburg heating plant, in Hamburg, which had been opened by operator Vattenfall only in 2015.

The average compensation paid per megawatt of capacity is about 66,000 euros, the BNetzA said, well below the planned maximum of 165,000 euros. "A high level of competition has pushed the awarded sums down considerably," the BNetzA said. Overall, plant operators will receive about 317 million euros for withdrawing their plants from the electricity market. The agency awarded submitted bids based on the ratio between the asked compensation price and the resulting CO2 emissions reduction. Germany's transmission grid operators can ask for some of the plants to be transferred into a capacity reserve to serve as a backup in "critical situations”. However, these plants will no longer participate in the electricity market in any event from 1 January next year.

The decommissioning auctions are among the first steps Germany has taken on its path towards a complete end to coal-fired power production by 2038 at the very latest, as defined in the country's coal exit law. The German parliament had set out a shutdown schedule for individual lignite power plants, compensation payments for operators and auctions for hard coal plant operators to gradually take capacity off the grid over the next years.

The phase-out plan was based on a compromise reached by a national coal exit commission but failed to garner widespread support and has instead drawn heavy criticism for falling short of climate targets and granting coal companies too much compensation for plants that might have turned into liabilites for operating companies, given the increasing market pressure on coal power.

"This auction has shown that the operation of many hard coal plants is apparently economically unviable," Philipp Litz, coal power expert at energy policy think tank Agora Energiewende*, told Clean Energy Wire. "This should come as no surprise, if you look at how power prices have declined," he argued. Litz said that the decision to decommission Moorburg as well as RWE's plant Westfalen, which opened in 2014, had to be viewed in the context of construction difficulties of both plants, which had cost investors dearly. "I therefore wouldn't say that this shows that all modern plants will be going offline soon."

He added that the auction had shown how a competitive situation can reduce compensation claims, a scenario that could not be applied to Germany's lignite plants, where compensation will be paid according to mutual agreements, as there are only two operators on the market and therefore no real competition can unfold. With a view to hard coal projects in other countries, Litz said the auction results had clearly shown the technology's difficult market situation. "Hard coal is under a lot of pressure – and not only in Germany."

For Hanns Koenig, analyst at Aurora Energy Research, the fact that many newer facilities were successful in the auction could be an indicator for an accelerated hard coal exit in Germany. "Not all older plants will have a chance in upcoming auctions, which means that they may close down without compensation, thereby accelerating the exit path," Koenig told CLEW. He argued the EU's Green Deal might have tipped the balance in operators' calculations. The value even of newer plants could fall sharply as investments in renewable power across the bloc go up. 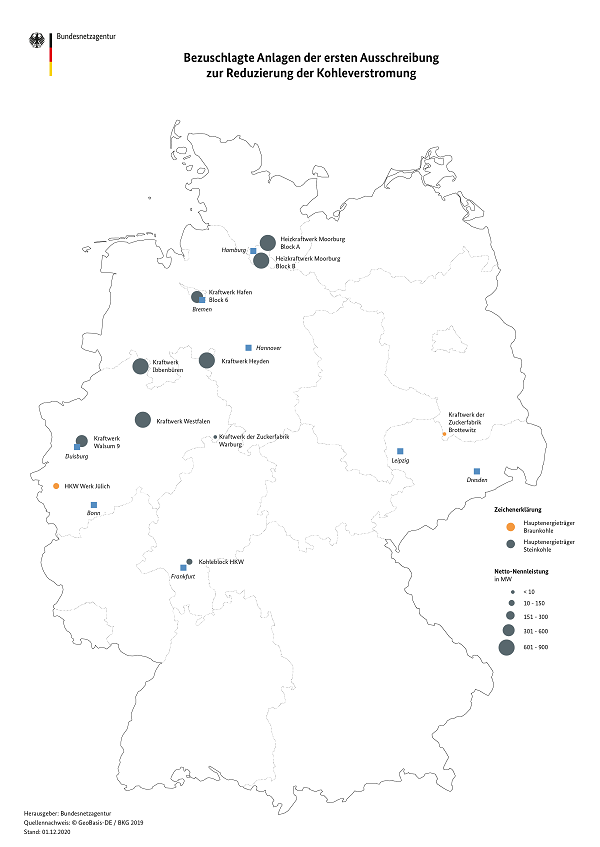 Vattenfall said the decision to include its heating plant in the first round of auctions would "provide clarity and enable us to phase out Moorburg earlier than previously planned”. Anna Borg, CEO of the Swedish operator company, said that although its Hamburg plant is "one of the most modern in Germany”, the decision to mothball Moorburg would be in line both with the country's coal exit plan and with Vattenfall's own strategy to become fossil-fuel free "within one generation." Depending on whether or not the plant would be transferred into a capacity reserve, the company will seek to support employees in "finding new jobs”. If Moorburg is not classified as "system relevant" by the BNetzA, the firing of coal will be stopped at the latest on 1 July 2021.

Operator Uniper succeeded in auctioning off its plant Heyden 4, with a capacity of 875 MW. The company said the "very early exit opportunity" provided by the BNetzA by accepting the plant's closure falls in line with the Uniper's intention to shut down a total capacity of 2.9 GW by 2025 "at the latest”, which would contribute to reducing its CO2 emissions by 40 percent over the next five years. The company's last coal-fired power plant would therefore be the controversial Datteln 4, which only started operation this year. Uniper CEO Andreas Schierenbeck said planning security regarding plant closures would help the company focus on new projects, "for example in the hydrogen sector”. With a view to the jobs lost at the Heyden plant, Schierenbeck stressed that "phasing out coal is a political goal and will cost jobs”, adding that the company would seek to prevent "social hardship" caused by the plant's decommissioning.

Economy minister Peter Altmaier said the auction's oversubscription are an "encouraging" sign that demonstrated there is "true competition" among operators. Auctions for hard coal plant decommissioning would now continue until 2026, after the EU Commission last week ruled that the last planned round of auctions in 2027 would have to scrapped. "Between 2027 and 2038, decommissioning will happen by regulatory law and without compensation," Altmaier added.

Green Party MP Oliver Krischer said the auction's results are very welcome, but added that "this could have happened a lot cheaper”. Most of the plants that now receive compensation for shutting down would have dropped out of the market anyway due to low demand for coal power. "Installations that had been written off already have now been turned into positive assets again," Krischer argued. Similarly, renewable power provider LichtBlick said the auction had been "a good day for the climate but a bad day for taxpayers." The end of the Moorburg plant "corrects one of the biggest industrial and climate mis-investments in Hamburg's history," but it would be "a scandal that taxpayers now have to pay hundreds of millions" due to a misguided decision by Vattenfall and Hamburg's city government.

Andree Böhling, of NGO Greenpeace, said Moorburg had exposed the flaws of Germany's coal exit law, which produces a phase-out "that is too slow and unnecessarily expensive”. It would be hard to explain why a relatively modern hard coal plant now goes offline, whereas "the dirtiest lignite plants are allowed to keep running for many years”.