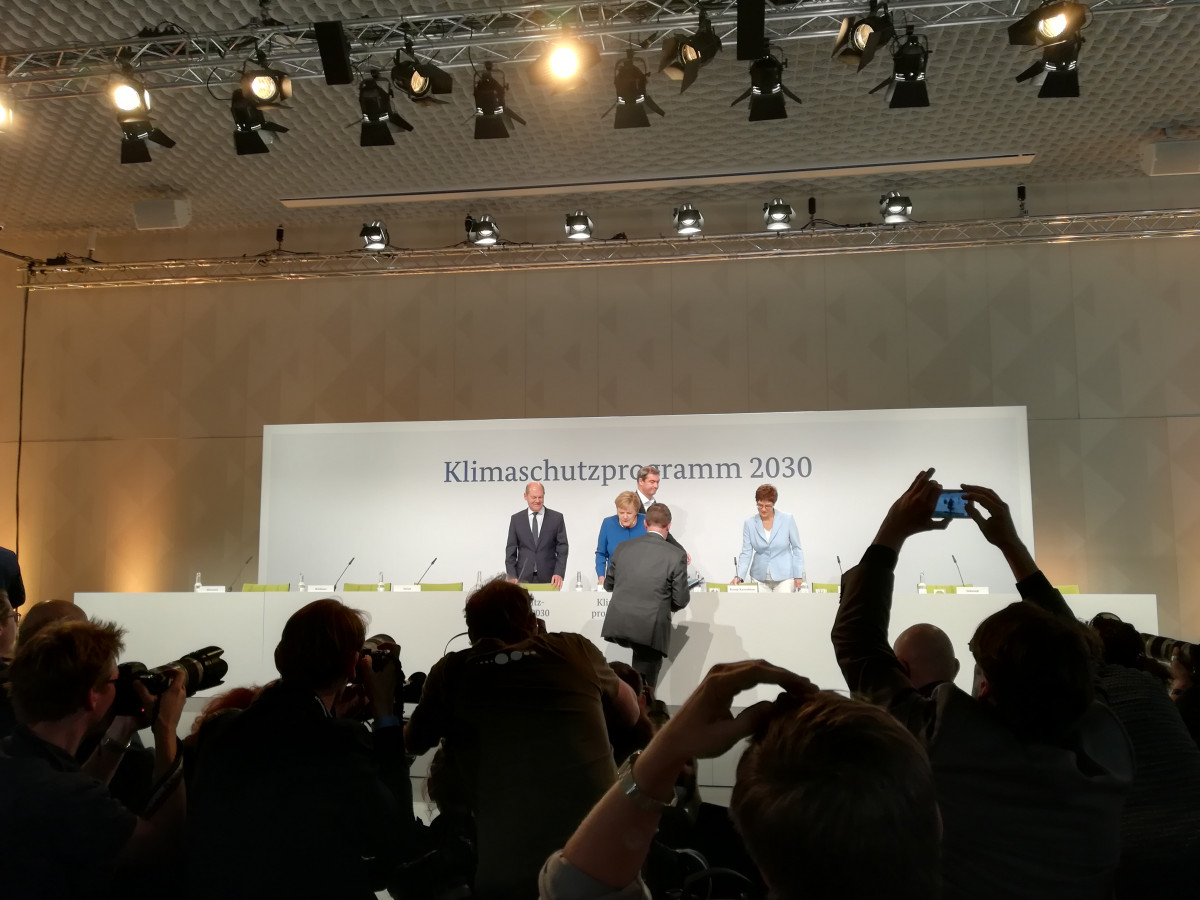 Germany's Merkel and her climate cabinet decided a whole range of measures and instruments at their meeting on 20 September 2019. Photo: CLEW/Wettengel.

A little more than one year after Germany’s so-called “climate cabinet” presented a big policy package to reach 2030 climate targets, its members will meet again on 2 December – but this time only to take stock, not decisions. Chancellor Angela Merkel invited her colleagues to discuss where the country stands on climate action and what a more ambitious EU climate target could mean for Germany. NGOs called on the government to go beyond a simple stocktaking and use the meeting to ensure progress on climate in the run-up to national elections next year. This Q&A gives an overview of what the meeting will be about and provides background on the climate cabinet.

What is the climate cabinet?

Faced with growing calls for more action by citizens – especially by climate activists such as from the Fridays for Future movement – and a lack of progress in the government to agree a policy package to reach Germany’s 2030 climate target, chancellor Angela Merkel in early 2019 installed the so-called “climate cabinet” – a group of ministers most closely affected. The  “highest political level” would thus aim to decide the necessary instruments to reach targets.

The climate cabinet had met several times throughout the year and on 20 September 2019 presented its climate action package, which included decisions on the coal exit, a climate action law, a CO₂ price in the transport and heating sectors and a large programme of measures in all sectors.

The package also included the decision to make the climate cabinet a permanent forum that “annually assesses the effectiveness, efficiency and target accuracy of the introduced measures” and decides additional measures if sectors are lagging behind. The climate cabinet does not have a set meeting calendar, but is meant to convene when necessary.

Will there be big decisions on 2 December?

No. A government source told Clean Energy Wire that the meeting would above all be an opportunity to take stock. After a year marked by the coronavirus pandemic and its effect on economies across the globe, Svenja Schulze is scheduled to give an overview of which parts of the 2019 climate action package are well on their way, such as the coal exit legislation, the CO₂ price on transport and heating fuels which will launch on 1 January 2021, and the new climate action law. Schulze is likely also going to mention areas where action is lagging, such as the yet unfinished renewables law reform or the transport sector. One year after the government agreed the climate package, there is however not yet any emissions data to assess the effectiveness of measures.

And then there is the question whether all of this is enough to reach the climate targets, especially if the EU increases its ambition for 2030, as is expected. Schulze, for example, has in the past weeks called on her government to raise the renewables share goal higher than currently planned in the renewables reform draft.

Also on the agenda are the hydrogen and e-mobility markets and a discussion on acceptance of climate measures among the population. Opposition to new renewables projects, such as wind turbines, effects of the upcoming carbon price on low-income households and ways to tackle these issues – for example through citizens’ participation – will play a role.

What will happen next?

Decisions will only follow should new greenhouse gas emissions data, published by the Federal Environment Agency (UBA) in mid-March 2021, show that some sectors are lagging behind, the source said. The independent “expert council for climate issues”, as introduced with the climate action law, will then have exactly one month to examine the data and provide an assessment to the government and parliament by mid-April.

“That’s when it gets really interesting,” said the government source. Should an area lag behind targets, the responsible ministry will have to come up with a proposal for an “immediate action programme” which the climate cabinet will then deliberate and adopt. The climate cabinet can also decide to adapt the annual sector emissions budgets.

NGOs are calling on the government to use the meeting to make further climate action decisions without delay. “We expect the German government to use the remaining ten months until the federal elections to make significant additional efforts in terms of climate action measures,” said Christiane Averbeck, managing director of Climate-Alliance Germany, a network of 115 organisations including environmental groups, development groups, churches, trade unions and consumer associations. Especially the ambition in the transport and buildings sectors needs to be increased, but the planned renewables expansion is also not enough to make reaching even the existing 2030 climate target possible, she said.

“At the latest when the EU tightens its [2030] climate target in December, the German government must also raise its climate target and decide on appropriate measures,” said the NGO network.