Climate & CO2 Elections & Politics
The negotiation partners in Germany's ongoing coalition talks have agreed to postpone the country's 2020 emissions reduction target until "the early 2020s". Party negotiators also agreed on introducing a climate protection law, ramping up the country's renewable energy expansion, and preparing an end to coal-fired power production to make sure that climate targets for 2030 can be met, according to a working group paper from the talks between Chancellor Angela Merkel's conservatives and the Social Democrats. The parties said there was no final agreement until talks end later this week. [Update adds paper details, NRW state premier comment]

The two political camps currently in exploratory talks to form the next German government – Chancellor Angela Merkel’s CDU/CSU, and the SPD – have agreed to postpone the country’s 2020 climate target. The parties, who have also been in government together for the past four years, agreed that Germany will stay “committed to the agreed climate protection targets for 2020 (-40% [greenhouse gas emissions]), and 2030 (-55%)”, as well as the long-term goal of becoming largely carbon neutral by mid-century, according to an ’energy/climate/environment‘ working group paper, originally reported by several German media including the journalist network Redaktionsnetzwerk Deutschland (RND) and also seen by the Clean Energy Wire.

But the paper also states that “from today’s perspective, the short-term target for 2020 will not be reached”. The possible coalition partners agree to introduce a set of measures to close the gap as much as possible by that year, and then reach the target of reducing greenhouse gas emissions by 40 percent compared to 1990 levels “by the early 2020s”. The negotiators agreed that the subsequent 2030 goal of reducing greenhouse gas emissions by 55 percent remains unchanged, but more emphasis should be placed on reaching it without compromising energy supply security and economic feasibility.

The CDU’s chief energy policy negotiator, North Rhine-Westphalia’s State Premier Armin Laschet, confirmed that there was a working group agreement: “I can tell you today that, together with the Social Democrats, we have finished the topic energy policy within two sessions,” he told the audience at an event by the Chambers of Commerce and Industry (IHK) in Düsseldorf. 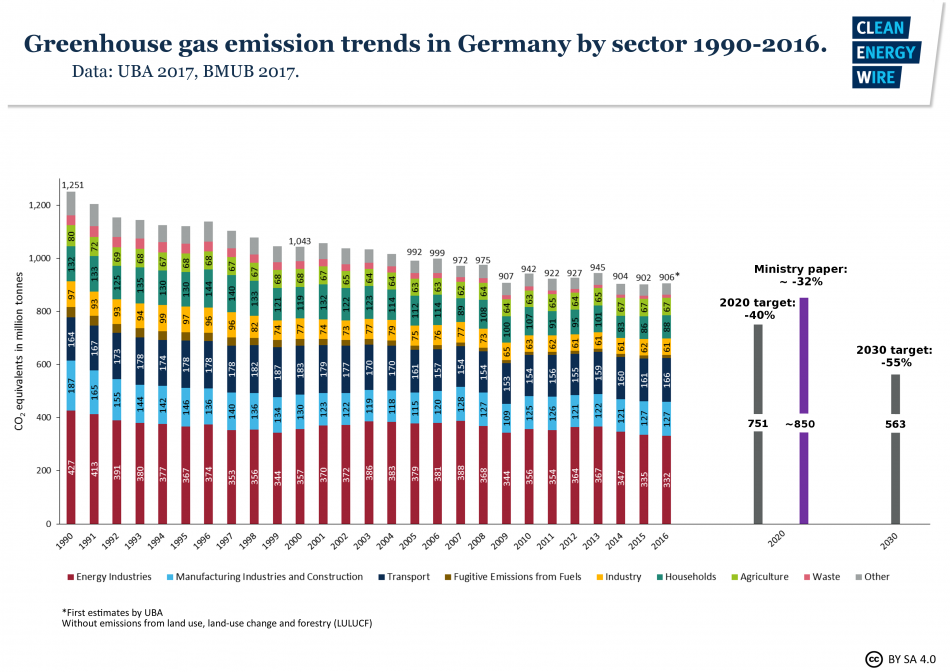 The German environment ministry, run by SPD-minister Barbara Hendricks, warned in October 2017 that the 2020 target was likely to be missed by a wide margin, with emissions reduction in that year possibly ending up at around 32 percent. Emissions were stagnating in 2017 after an increase in the previous year, according to a forecast by energy market group AG Energiebilanzen (AGEB).

Every German government since 2007 has committed to reducing the country’s annual greenhouse gas emissions and, prior to last September’s election, Chancellor Merkel had promised voters that the government “will find ways” to still achieve a 40 percent reduction  by 2020. During the ill-fated ‘Jamaica coalition’ talks with the Green Party and the pro-business FDP, Merkel reiterated that the “very ambitious” 2020 target played “a major role” in the negotiations and that she still did “not want to give up” on it.

Germany has made climate protection a priority of its Energiewende, a dual shift from fossil fuel and nuclear power to a renewables-based energy system. Back at the 2017 G20 summit in Hamburg, Chancellor Merkel, who some had dubbed the “Climate Chancellor” for her international climate protection efforts, also pushed hard to convince the group of leading industrialised and emerging economies to step up their efforts to comply with the Paris Climate Agreement by keeping all countries but the United States aboard.

The leaked paper is a work in progress. The different working groups will continue to present their agreements to the party leadership during the coming days, said Michael Grosse-Brömer, the CDU’s parliamentary whip, in a statement on behalf of the involved parties. “Nothing is agreed, until everything is agreed,” he said. Exploratory talks are scheduled to end on 11 January. The parties involved will then decide on whether to enter formal coalition negotiations.

The leaked objectives also include:

According to the negotiation paper, coalition negotiators of the CDU/CSU and the SPD also agreed to stick to the course laid out in the Climate Action Plan 2050 by setting up a commission for structural economic change. It will be tasked with producing an action plan by the end of 2018 on how to manage the transition in regions most affected by tighter climate protection regulations, such as the phase-out of coal-fired power production.  SPD head Martin Schulz acknowledged in December 2017 that a coal exit was inevitable if Germany was to honour its climate pledges, but stressed that this must not happen at the expense of affected workers.

Conservatives and the SPD plan to adopt a climate protection law by 2019 to ensure that the 2030 climate target is reached. It will also include measures for the transport and construction sectors. The SPD had called for such a law in its election manifesto. The parties also aim to substantially expand renewable power production to reach a share of 65 percent by 2030 by holding additional auctions for wind and solar power installations.

Environmentalists and opposition parties criticised the decision to postpone the 2020 target. Energy policy expert Tobias Austrup, of environmental organisation Greenpeace, said the potential coalition partners “lacked political ambition and ecological responsibility” if they gave up on the 2020 target. “Of course, Germany can reach the 2020 climate target. All that’s needed is political will”, Austrup argued.

The Greens’ parliamentary group leader Anton Hofreiter agreed that it would have been “difficult, but doable” to reach the 2020 target. “One would have had to start with the dirty coal power plants, where there were indications of an agreement in the Jamaica coalition talks,” Hofreiter told ARD Morgenmagazin.

The Left Party’s Lorenz Gösta Beutin said the decision to put off the target was “the sad consequence of climate policy inaction of former federal governments. The grand coalition seemed to have “buckled to the pressure of industry and economy lobby groups”.

Some observers had already speculated before the election that the next German government might move more slowly on the Energiewende. French think tank France Strategie said in early September that “a reduction in the ambition” was to be expected after the vote as the project’s long-term insecurity and associated costs remained very high.

In its Preview2018 interview series, several energy and climate policy experts told the Clean Energy Wire that the 2020 goals were indeed highly at risk. Energy economist Claudia Kemfert said a failure to meet the goal would weigh heavily on Germany’s international climate policy standing, while environmental organisation NABU said missing the goal was “not an option” at all.

However, Andreas Kuhlmann, head of the German Energy Agency (dena), told the Clean Energy Wire at the time that it would be wrong to “spend too much time assigning political blame” if the goal is missed. Instead, Kuhlmann, a Social Democrat, said, parties should learn from this experience and look ahead “to prepare for achieving the next step – reducing emissions by 55 percent by 2030”, as well as near total decarbonisation by 2050.

In the wake of the reports that a new German government could bin the 2020 climate goal, prices for CO2 allowances fell in Europe, Carbon Pulse reported.