Germany's so-called climate cabinet - a round of ministers with key responsibilities touching climate issues - has decided to discuss options for a carbon price at its first meeting in Berlin today. Environment minister Svenja Schulze said the talks had been "very constructive" and confirmed that the government will decide on binding climate legislation for all sectors this year. Young environmentalists called on the climate cabinet to speed up emissions reduction efforts, but the government says that implementation takes time.

The new climate cabinet, consisting of government members relevant for Germany’s climate policy, will discuss the introduction of a carbon price to reduce the country’s greenhouse gas emissions, environment minister Svenja Schulze said after the group’s first meeting. The cabinet’s first session had been “very constructive”, Schulze said. She added that Chancellor Angela Merkel had been “very active” and serious about making the cabinet work.

The intra-government group has been tasked with agreeing on a binding pathway to fulfil Germany’s Climate Action Plan 2050, which was adopted by government in 2016 but was not translated into law. The plan prescribes detailed emissions reduction trajectories for all sectors, which are supposed to fall by 55 percent by 2030 compared to 1990 levels.

The debate about a carbon price has picked up over recent weeks in Germany, with observers crediting the Fridays for Future school student strikes for more vigorous climate action with putting pressure on the government. A CO2 tax would allow the government to set a price for greenhouse gas emissions, which would make the use of coal, petrol and heating oil more expensive. Such a move could result in fewer greenhouse gas emissions and help Germany meet the goals of the Paris Climate Agreement. At the beginning of the week it already emerged that the government plans to task Germany’s Council of Economic Experts with examining the opportunities and risks of a CO2 tax.

Environment minister Schulze, who formally heads the climate cabinet that also includes Merkel, transport minister Andreas Scheuer, energy minister Peter Altmaier, construction minister Horst Seehofer and agriculture minister Julia Klöckner, said that the climate cabinet faced a difficult task and would use the time until the next scheduled meeting at the end of May to prepare a broad debate on reducing Germany’s carbon footprint. 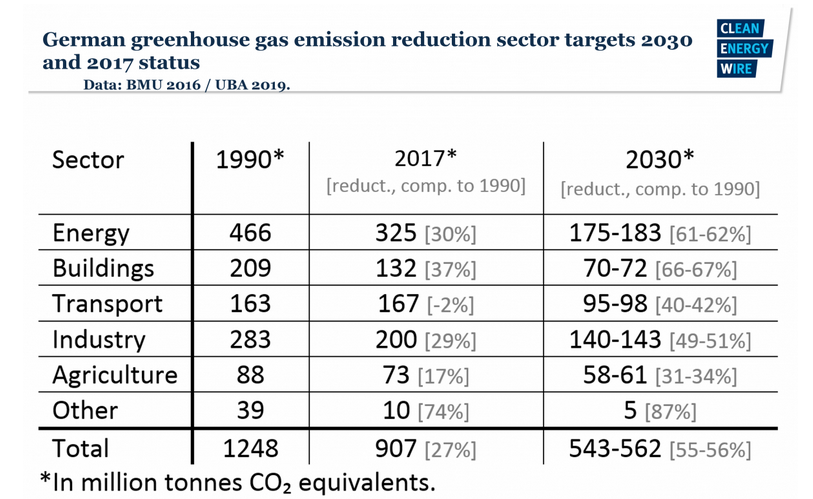 The climate cabinet’s formation followed an open dispute within the government over a proposal by Schulze for Germany’s planned Climate Action Law. The draft law by Social Democrat Schulze says that every ministry has to abide by a given emissions budget and pay from its own budget if the EU sanctions Germany for excessive emissions under the European effort sharing scheme.

Finance minister Olaf Scholz has already set aside reserves of up to 300 million euros until 2022 for possible fines by the EU. Earlier this week, Scholze presented his ministry’s “Energy Concept 2038,” in which he calls for more commitment for climate action within the government and backs fellow SPD member Schulze, saying that her draft is setting the standards to be followed. However, the approach had been widely rejected by ministers from the conservative CDU/CSU alliance, especially by transport minister Andreas Scheuer. New CDU party leader Annegret Kramp-Karrenbauer also rejected key elements of the draft law, but said the government coalition should consider CO₂ pricing as a possible policy tool.

Government spokesman Steffen Seibert, who also sits at the table in the climate cabinet, said the meetings would serve to introduce “binding measures” for climate action in 2019, echoing earlier remarks by Chancellor Merkel who said that the climate cabinet will ensure that Germany’s highly anticipated Climate Action Law will be introduced before the end of the year.

On the day before the climate cabinet’s first meeting, the youth sections of several environmental organisations including WWF Germany and BUND called on the ministers to agree on a package of urgent climate action measures. In an open letter to the cabinet, the organisations say “a true turning point” for climate policy has arrived and that the interest of young people have to be better reflected in government decisions. “Because you haven’t done enough for the climate over many decades, there is no more time for a soft transition and much more difficult measures have to be taken,” the NGO youngsters said, adding they expect swift implementation.

The group argued that the Fridays for Future school student protests for more climate action were a sign of desperation among young people, and said that only a comprehensive climate law which prescribes the necessary emission reduction for all sectors can help to put the country back on track regarding climate policy. “The Paris climate target is not just a simple approximate value,” the group said, adding that it would be today’s youth that faced a future shaped by “irrevocable” decisions made today.

Government spokesman Seibert said he welcomed that the Fridays for Future movement had helped to put the “essential” topic of climate action centre stage in the public debate, and that the young protesters “make policymakers get a move on.” Seibert said the government also welcomes that the movement’s speakers had formulated concrete demands to the government. However, he added that the coal exit debate was a good example to show that climate policy decisions had to satisfy many diverging interests. The government could not ignore the economic fate of entire regions and this could take a lot of time, Seibert added. “Our implementation might be slower than what the Fridays for Future movement hopes for, but there are good reasons for that.”