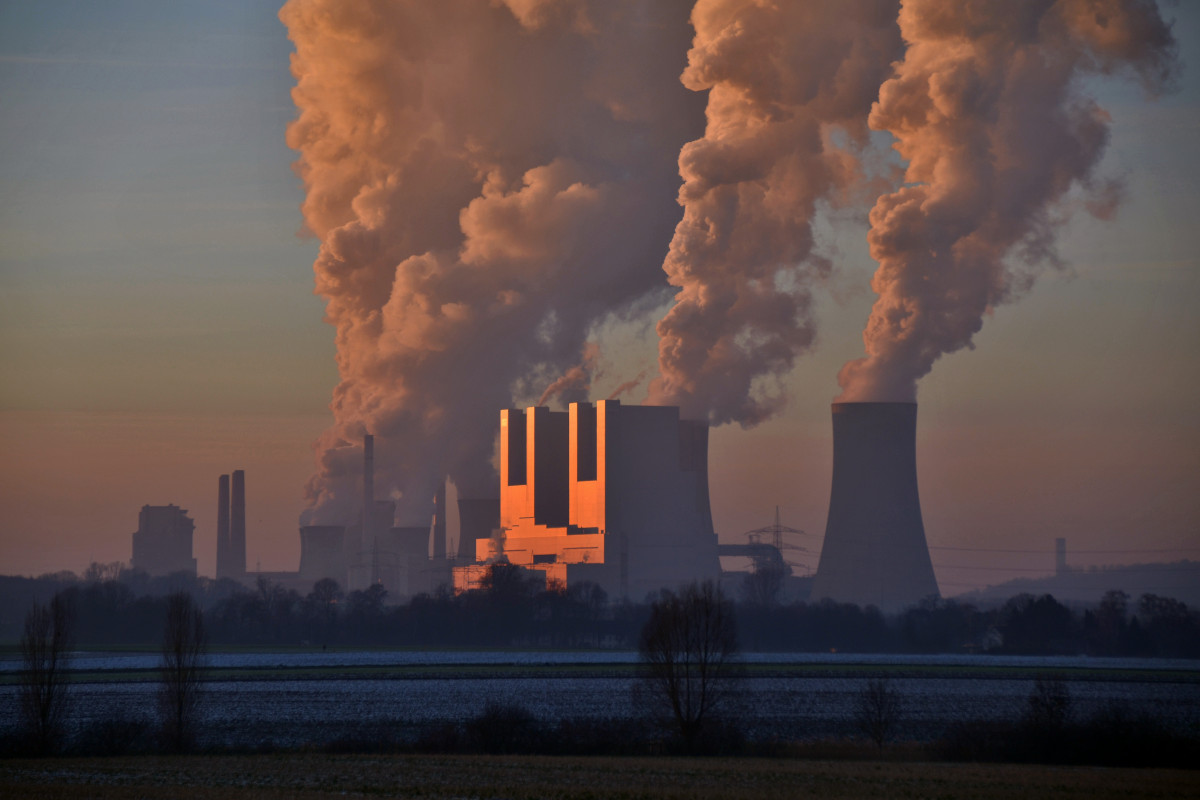 Preview 2020: The fate of coal-fired power production in Germany has been sealed with the agreement of a government-appointed commission to phase-out the fossil fuel no later than 2038. But the proposal so far has not been translated into concrete legislation or a decommissioning roadmap and negotiations are set to drag on well into 2020 - and even include the possible opening of a new coal plant. However, the second consecutive year of rapidly declining coal use in the country's energy mix suggest that the coal exit might happen quicker than many expected after all.

The agreement by Germany's coal exit commission on a phaseout of the fossil power source was one of the first major energy and climate policy developments in the country in 2019. The government-appointed commission decided that coal-fired power production should end by 2038 at the latest, a proposal the government said it would enshrine law in the context of its emissions reduction efforts by the end of the same year. Concrete legislation, however, has been delayed until the beginning of 2020, according to the economy ministry (BMWi), which attributed the adjournment to the law’s complexity and need for further coordination among ministries regarding individual provisions. Due to the persisting difficulties in implementing the proposal, a coalition of business associations, trade unions, institutes and NGOs warned in December that the "societal consensus" reached by the coal exit commission was under threat and urged chancellor Angela Merkel to ensure that the proposal be adopted in its entirety.

"One year after the initial deadline for the outcomes of the coal commission, the government is still failing to translate the coal phaseout and just transition plan into legislation," Alexander Reitzenstein of NGO E3G told Clean Energy Wire. A lack of clarity about its coal phaseout plan and its regulatory framework for the expansion of renewables means that Germany "risks falling further behind in an EU that is moving towards climate neutrality by 2050", he said. Germany's climate policy is poised to receive special scrutiny on the international stage in 2020, since the country will be presiding over the EU Council in the second half of the year and also has announced its commitment to a robust continuation of the Paris Agreement at COP26 in Glasgow at the end of the year. Reitzenstein called the protracted negotiations a "major burden" on the phaseout and stressed that other countries in Europe, like the Netherlands, Spain, Portugal and Greece, have proven that faster transition processes are possible.

While agreement on structural economic assistance for former coal mining regions was reached after a few months, legislation for the phaseout roadmap of coal power plants and possible compensation payments for operators turned out to be much more difficult to pass. The commission had recommended that questions of compensation payments for lignite plant operators RWE, EnBW and Czech EPH be settled in "mutual agreements" until mid-2020. If no agreement can be found, the commission proposed the enforcement of plant shutdowns through "regulatory law", which means units would likely go offline without any substantial compensation at all. RWE head Rolf Martin Schmitz said he would expect compensation payments to the tune of 1.2 to 1.5 billion euros for every gigawatt (GW) that is decommissioned, which would amount to roughly 25 billion euros in total for all lignite plants. 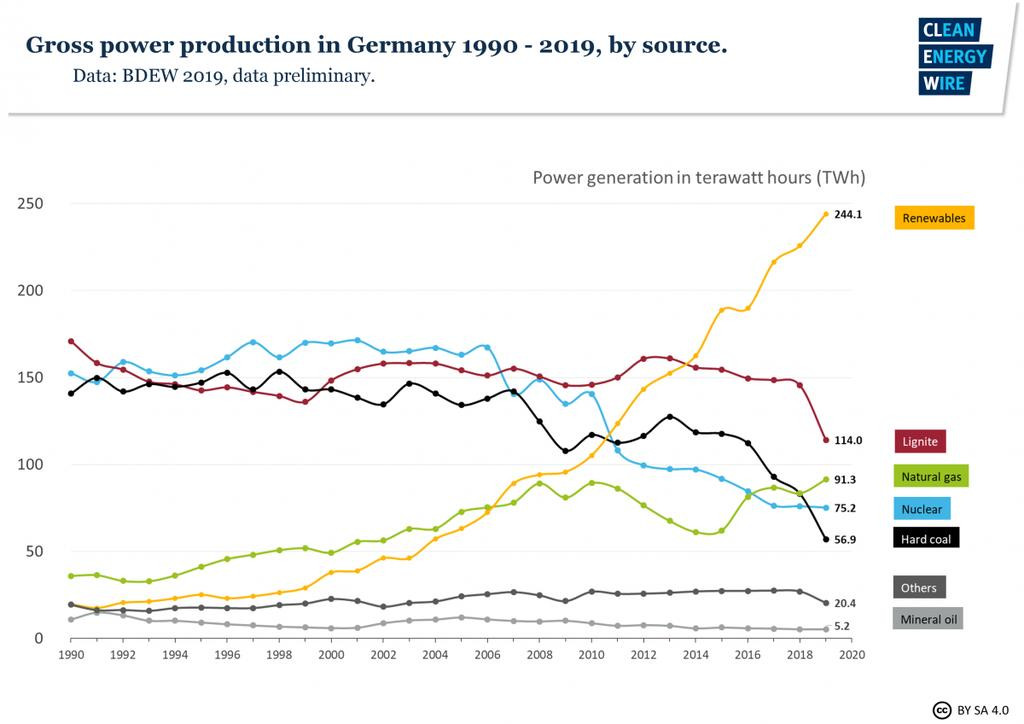 The use of coal in Germany's power mix has dropped visibly since 2018.

The new head of energy industry group BDEW, Kerstin Andreae, said at the association's year-end press conference that a coal exit without compensation for operators would be inacceptable for the energy industry. "This sort of thing cannot be done under the rule of law," she argued. The former Green Party MP said that the compensation payments were part of a whole consensus package negotiated between representatives of the state, the industry and civil society and that the need for a comprehensive adoption by the government was widely acknowledged.

Since the agreement has been made, however, coal-fired power production in the country has dropped considerably for the second year in a row in 2019, posting a decline of more than 20 percent in the country's energy consumption and pushing the country closer towards reaching its 2020 emissions reduction target than initially projected. Regarding a possible phaseout roadmap, the commission had recommended that both lignite and hard coal capacity should be reduced to 15 GW each by 2022 and then to 9 GW lignite and 8 GW hard coal by 2030, with coal plants in western Germany poised to go offline first due to the eastern region's greater dependence on the coal industry.

The shutdown of hard coal plants, on the other hand, is to take place by means of decommissioning auctions in which operators submit bids for compensation and are accepted if they require the lowest compensation payment. A leaked draft of the coal exit law from November included a chapter on forced hard coal plant shutdowns starting in 2027 in case operators do not sufficiently participate in the planned auctions, which might start as early as mid-2020.

Armin Laschet, state premier of North Rhine-Westphalia (NRW), Germany's most populous state, cautioned in November that a quick implementation of the coal exit was needed in order to create planning security for all stakeholders. Laschet, a conservative of Merkel's CDU party, previously expressed strong support for the coal industry but since has increasingly urged rapid action and even advocated for preserving the embattled Hambach Forest, a pristine woodland next to a lignite mine that became a symbol for climate activists fighting to protect the forest's clearance by operator RWE to expand the open cast mine. Although the woodland's fate is still hanging in the balance, RWE head Schmitz has signalled that Hambach Forest could be saved, although at a high financial cost.

While phasing out coal is set to dominate the agenda, the phase-in of one new coal plant, Datteln 4 in NRW, will likely also make headlines in 2020. The government greenlit the plant's commissioning in October, irking environmental groups who see it as a concession to energy company Uniper and running counter to emissions reduction efforts. Uniper began building the plant in 2007 and the unit was originally scheduled to be operational in 2011. The project was delayed several times, however, and ended up costing 1.5 billion euros. Proponents like NRW state premier Laschet say the modern plant will help in shutting down older and dirtier plants quicker, but eastern state premiers have said this would run counter to their understanding of the coal exit roadmap that plants in the west are to go offline first.

BDEW head Andreae said the coal exit commission's agreement did not leave any room for "cherry picking" regarding Datteln 4. A provision to allow for the plant's commissioning had been part of the compromise that that all federal states and also environmental groups subscribed to.

The commissioning would still send "a devastating signal" at the international level, however, said E3G’s Reitzenstein. "The specifics of the German transition are watched closely by others coal-dependent countries and this is fuelling concerns about Germany's ability to comply with the Paris Agreement domestically, which would require a coal phaseout by 2030," he argued.