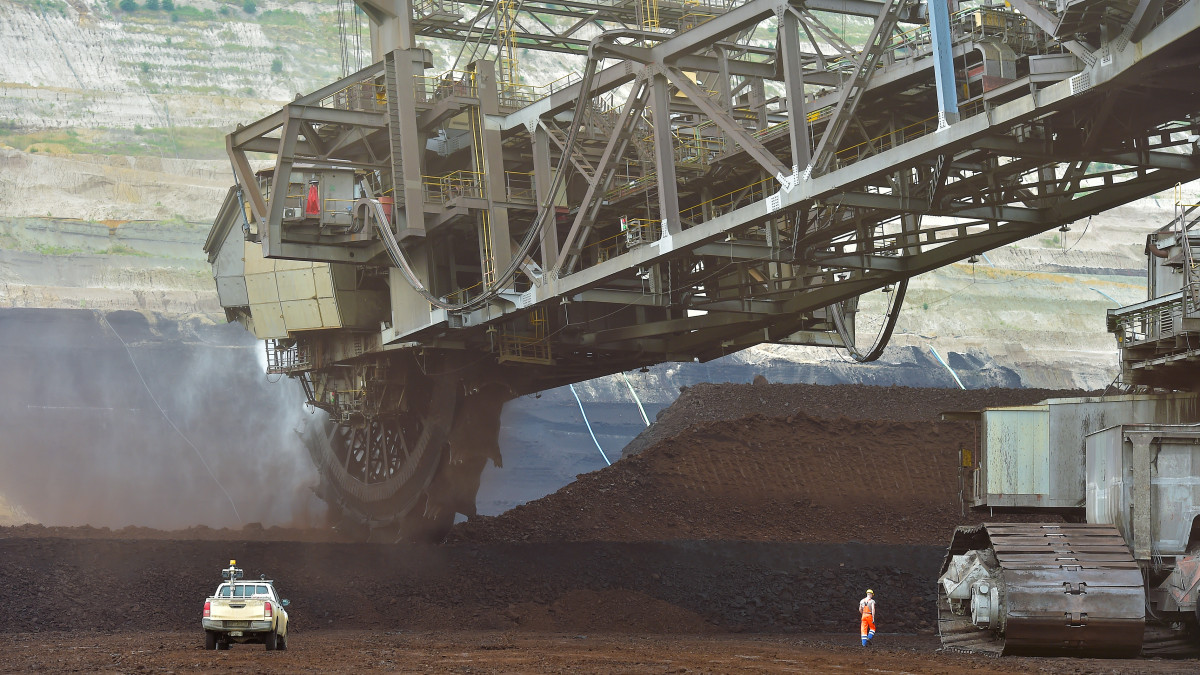 Europe's largest CO2 emitter RWE has pledged to become carbon neutral by 2040. The announcement underlines the deep transformation underway at the German operator of lignite mines and power plants, which is now betting on renewables following a massive asset swap deal with former competitor E.ON. But climate activists and media commentators argued the utility was trying to sell the inevitable phase-out of its coal power plants as climate protection and corporate sustainability experts said RWE needed to put numbers behind the goal.

Europe's biggest CO2 polluter RWE aims to become carbon neutral within 20 years by focusing on wind and solar power production as well as on electricity storage. "We will be a carbon neutral company by 2040," RWE CEO Rolf Martin Schmitz said at a press conference marking the official takeover of the renewables activities of its erstwhile rival E.ON. "Today begins the era of the new RWE," Schmitz said. The renewable power capacity of RWE's former subsidiary Innogy will soon also be absorbed into the company's renewable division.

RWE said it had already decreased its CO2 output by one third from 2012 to 2018, representing a decline of 60 million tons. "An additional reduction of approximately 70 percent is envisaged by 2030" compared to 2012 levels. Schmitz said the 2040 target was "more than ambitious" for his company. Germany aims to exit coal-fired power generation by 2038 at the latest.

According to British NGO Sandbag, RWE operates three of Europe's five most CO2-intensive power plants, a role that has made the company one of the prime targets of climate activists. It is also Europe's largest emitter of CO2, according to Carbon Market Data.

Last year, protests focused on the preservation of the Hambach Forest, an ancient woodland that RWE wants to cut down for coal mine expansion but which has become a symbolic battleground for climate activists from Germany and beyond. RWE for long fought for its right to clear the forest in accordance with official regulation. Asked about the future of the woodland, Schmitz now said it was "quite possible" that Hambach Forest will be preserved following a replanning of the nearby lignite mine.

The energy company joins a growing list of German industry heavyweights pledging to become carbon-neutral, such as carmakers Volkswagen and Daimler, supplier Bosch or industrial conglomerate Siemens. However, there is no commonly accepted standard of what becoming carbon-neutral actually involves.

RWE did also not provide finer details of its climate ambitions, something the firm should do soon, said Steven Tebbe, the Managing Director Europe for CDP, a not-for-profit charity that runs a global disclosure system for investors, companies, cities, states and regions to manage their environmental impact.

"As Europe's largest single emitter, we believe that this ambition needs to be matched with a science-based target that ensures that decarbonisation for the company happens in line with the goals of the Paris agreement," Tebbe told Clean Energy Wire. "Other firms are already ahead in this transition. Those like Orsted, Iberdrola, and Enel have approved science-based targets in place and have recently committed to decarbonise at the pace required to limit warming to 1.5°C. To give confidence to investors and stakeholders, this must be the next step for RWE to show a viable path for faster emissions reductions."

"We will make huge investments in wind and solar power as well as in high-capacity storage technologies," RWE said. Chief Financial Officer Markus Krebber said RWE planned to invest an annual 1.5 billion euros net in onshore and offshore wind, as well as photovoltaics and storage. He added this sum could rise to between 2 and 3 billion by joining with partners.

Environmental NGO Greenpeace criticised the company was selling the inevitable as climate protection. "With this announcement, Europe's largest CO2 polluter is not assuming any responsibility for the climate crisis," said Greenpeace energy expert Karsten Smid. He added cheap renewables and European climate targets will ensure that lignite power plants will be switched off long before 2040.

Following a government commission's recommendation to shut down all coal facilities by 2038 at the latest, RWE is set to gradually take coal power plants offline. However, CEO Schmitz earlier this year said RWE would claim between 1.2 and 1.5 billion euros for every gigawatt (GW) taken off the grid.

"Instead of a predictably outdated target, RWE needs an exit route from coal that is in line with the Paris climate targets," Smid said. "To achieve this, all the Group's European coal-fired power plants must be phased out by 2030 at the latest."

On the day of RWE's landmark announcement, protests against the company's lignite mining operations continued unabated. Residents of several villages threatened by the expansion of RWE's mines in Western Germany formed an alliance to challenge the expansion plans. The group acting under the name "human rights before mining rights" said it demands legal clarity on whether they can be forcibly moved from their homes "which are scheduled for demolition by the utility so it can expand its Garzweiler coal mine," according to a press release.

Media commantators were also unimpressed with the new company strategy. Helmut Bünder wrote in conservative daily Frankfurter Allgemeine Zeitung, that "CEO Rolf Martin Schmitz can paint as much green on the company logo as he wants: RWE will remain by far the largest emitter of carbon dioxide in Europe for years to come." He argues RWE will burn coal "diligently" as long as it is forced to stop it in 2038. "The utility only does what policy dictates, not a single bit more […] from a business point of view, the change of course is consistent and correct. The embarrassing eco-progaganda, however, should best be avoided by RWE strategists."

Jürgen Flauger wrote in a commentary for business daily Handelsblatt that Schmitz and RWE are serious about the transition because they have no other choice. "The alternative would be their own demise […] RWE is the dinosaur of the energy sector." Flauger argues RWE must use its "last chance" to play a significant role in the energy transition, by investing heavily in wind and solar. "But it must also draw a credible line under the coal business and actively accompany the coal phase out. Then the new RWE will again have an economic future – and at some point perhaps even a good image."

RWE agreed in 2018 to take over all renewable assets of E.ON and its own subsidiary Innogy, which will become part of E.ON, in a deal involving asset swaps worth more than 40 billion euros. The utility's deal has turned RWE into Europe's third-largest renewables group after Spain's Iberdrola and Italy's Enel, according to Reuters. It has also become the world's number 2 operator of offshore wind farms behind Denmark's Orsted. 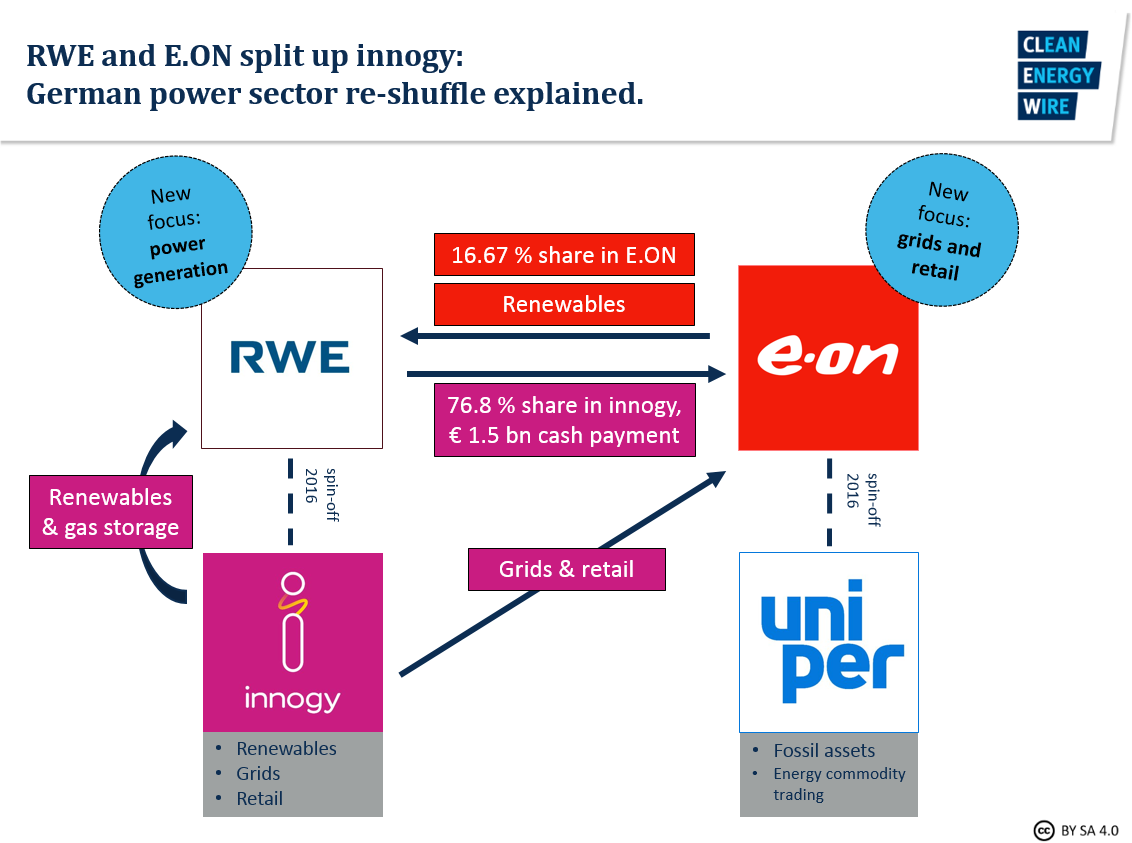