Factsheet
Germany's energy transition has shaken the country’s dominant power companies to the core, because it undermines their traditional business model of centralised power generation. In a bid to survive the turmoil, the utilities scramble for new business models. This factsheet provides an overview of the companies' key data. [UPDATE - adds details on E.ON & RWE deal to split up innogy in first paragraphs; leaves rest of factsheet unchanged.]

RWE and E.ON agreed in March 2018 to a major asset-swapping deal that would drastically reshape Germany's energy landscape, already in turmoil as the country's phase-out of nuclear power and transition to renewable power sources is wrecking old business models, and new competitors enter the frame. E.ON plans to buy RWE's green power subsidiary innogy, and the two utilities will exchange large parts of their assets to focus their activities. E.ON is to concentrate on the highly regulated distribution grid with its stable returns and end-customer focused energy solutions, while RWE takes on E.ON's and innogy's renewable businesses, on top of coal- and gas-fired power plants. The following graph illustrates major components of the complex deal: 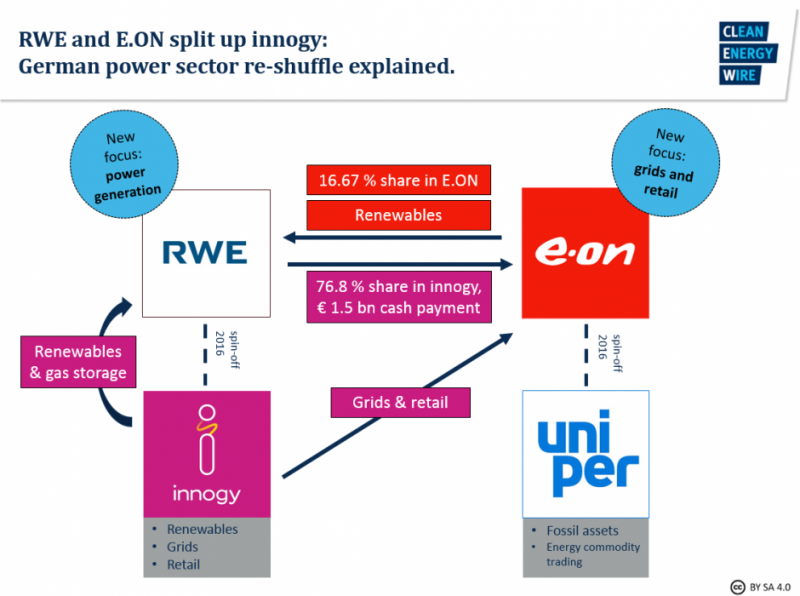 Find a collection of reactions to the deal from German politicians, energy companies and researchers here.

Check the CLEW dossier Utilities and the energy transition for background on Germany's changing energy market.

Please note: The remainder of this factsheet has not been updated and is based on data available in May 2017. 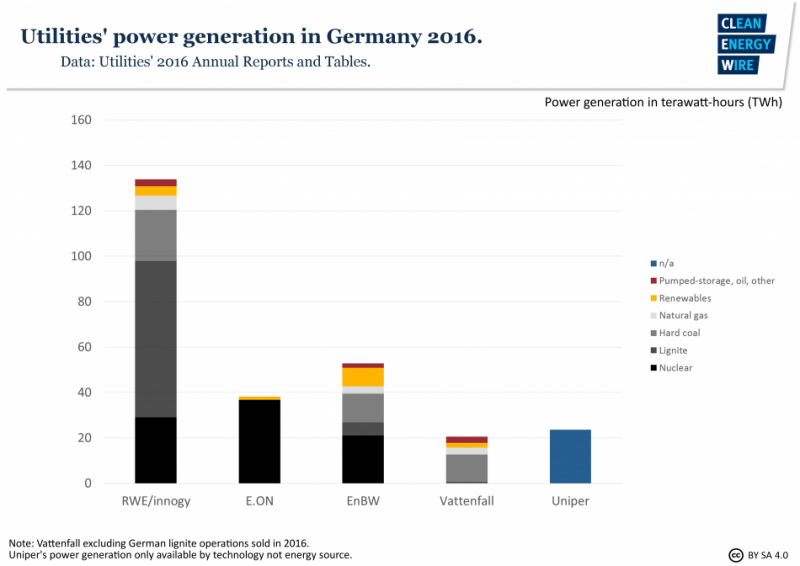 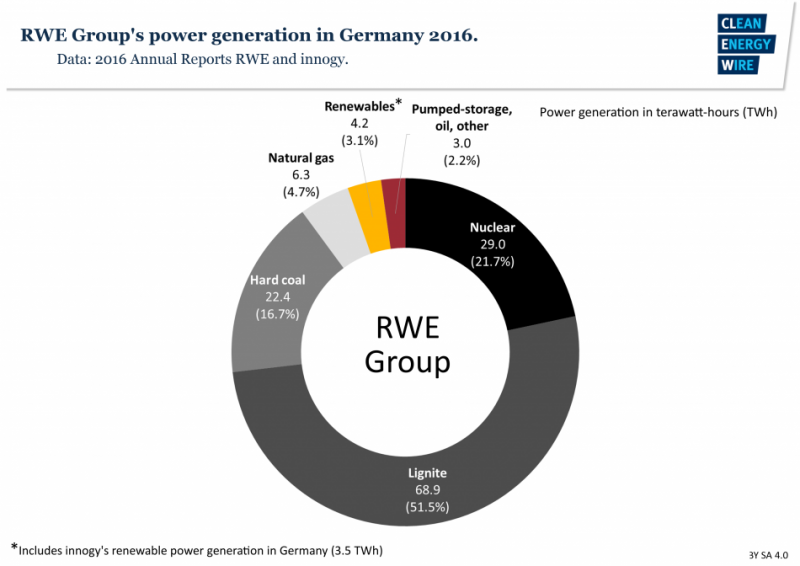 RWE is headquartered in the city of Essen and focuses on conventional power generation and energy trading, after the carve-out of its renewables, grid and retail operations created subsidiary innogy SE in April 2016. RWE still owns almost 77 percent of innogy’s shares, which is therefore included in its financial results. RWE’s most important markets are Germany, the Netherlands, the UK, and Turkey.

RWE’s net loss in 2016 amounted to 5.7 billion euros, mostly due to a 4.3 billion euros impairment on German power plants and other assets in Europe. Furthermore, RWE had to increase nuclear energy provisions for risk surcharges and is expected to contribute 6.8 billion euros to Germany’s state-administered fund for nuclear clean-up and final storage of radioactive waste.

Towns and cities in RWE’s home region own around 13 percent of RWE. This pool is RWE’s largest individual shareholder, and therefore exerts strong influence on the company’s decision-making. Company CEO is Rolf Martin Schmitz, who was Chief Operating Officer (COO) of the “old” RWE.

RWE’s renewables spin-off innogy is Germany’s largest power provider with 6.8 million customers, and also the country’s dominant distribution grid operator. Active in 16 countries across Europe, innogy employs about half of its 41,000 employees in Germany and, like RWE, is based in Essen.

Innogy pools RWE’s renewables, grid and infrastructure and retail businesses. In one of Germany’s largest initial public offerings, innogy had its stock market debut in October 2016. RWE owns about 77 percent of innogy’s shares.

In May 2017, innogy had a market capitalization of almost 19 billion euros, making it about twice as valuable as its parent company RWE – and furthermore the most valuable German utility. Innogy does not operate nuclear or conventional power plants. In contrast to other German utilities, innogy recorded a positive net income of 1.5 billion euros. Only E.ON’s fossil spin-off Uniper also managed to get into the black in 2016 (see below).

The company is headed by Peter Terium, formerly CEO of the “old” RWE. 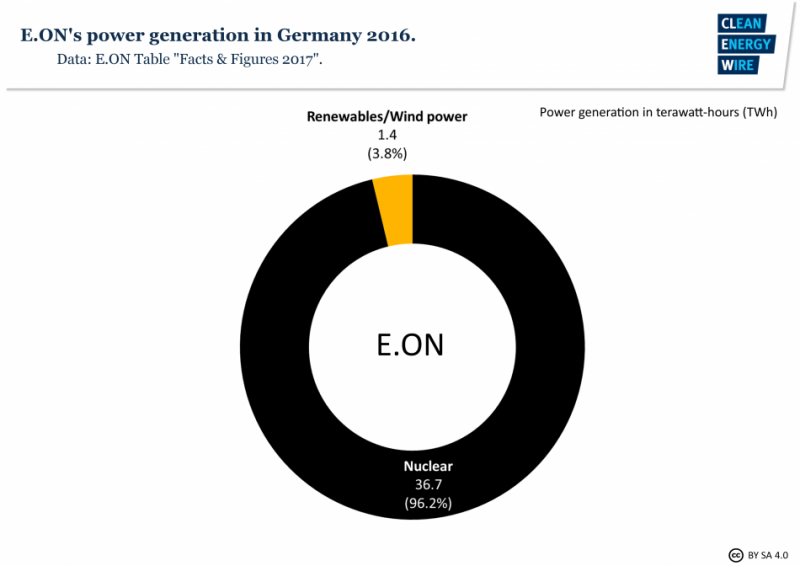 As Germany’s second largest power provider, E.ON supplies electricity to 5.3 million customers in the country and operates 349,000 km, or 19 percent, of the German power distribution network. At the start of 2016, E.ON split into two companies, transferring its fossil power generation and global energy trading business into the newly formed Uniper. E.ON remains Uniper’s largest shareholder with a stake of nearly 47 percent, but plans to reduce its share.

Under the leadership of CEO Johannes Teyssen, who was also the head of the “old” E.ON, the company now focuses on renewables, grids and customer solutions. A new law on nuclear liabilities forced E.ON to keep its German nuclear power operations – renamed Preussen Elektra – while transferring its hydropower/pump-storage assets to Uniper. As a result, E.ON’s German power generation portfolio is heavily dominated by nuclear, which accounted for 96 percent in 2016, while renewables – only relying on wind power – made up 4 percent (See “Facts & Figures Renewables and Preussen Elektra”).

Düsseldorf-based Uniper has about 13,000 employees and is E.ON’s fossil energy spin-off. It has taken over the “old” E.ON’s conventional generation and energy commodity trading business and launched as an independent company at the start of 2016. E.ON remains Uniper’s largest shareholder with a stake of about 47 percent.

In September 2016, Uniper was listed on the Frankfurt Stock Exchange and had a market capitalization of about six billion euros in May 2017. In its first year, Uniper’s profit was mainly driven by a strong gas business and new gas supply contracts with Russian Gazprom.

The company headed by CEO Klaus Schäfer generated close to 24 TWh of electricity in Germany in 2016, supplying mainly municipal utilities and industry.

Power generation: 52.8 TWh, all in Germany 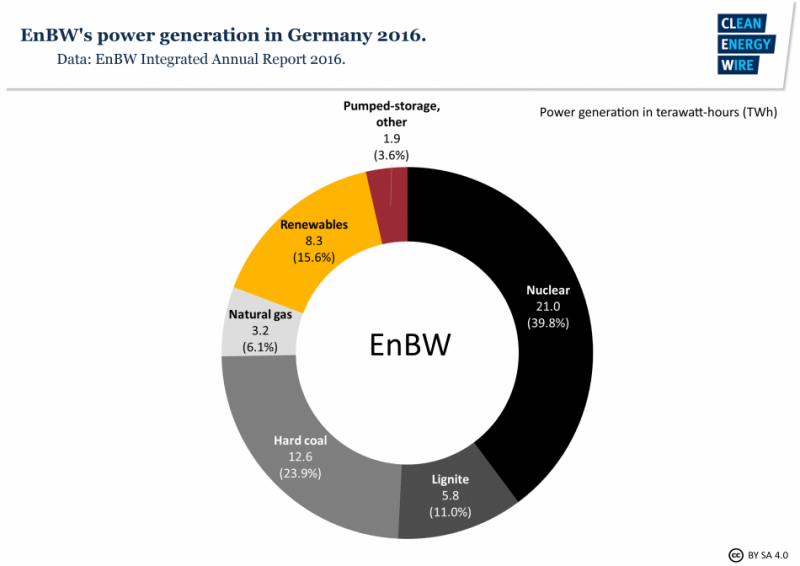 Like fellow nuclear plant operators – RWE, E.ON and Vattenfall – EnBW’s 2016 financial results were affected by expected payments for the nuclear clean-up, partly incorporated in 2016 financial statements. Along with low electricity prices, this resulted in a net loss of 1.8 billion euros to shareholders of EnBW AG. On July 1, 2017, EnBW is due to pay 4.7 billion euros into the state-administered fund to finance interim and final storage of nuclear waste as well as decommissioning and dismantling nuclear plants.

In 2013, EnBW announced its aim to double the share of renewable power generation capacity to over 40 percent by 2020 – currently at 23 percent (2016) – focusing on wind and hydro power. EnBW operates the transmission and large parts of the distribution grid (153,000 km) in Baden-Württemberg through its subsidiaries TransnetBW and Netze BW.

The state of Baden-Württemberg and Oberschwäbische Elektrizitätswerke, a consortium of municipal governments, together own over 93 percent of EnBW.

EnBW, which is headed by CEO Frank Mastiaux, was one of two companies committing to build offshore wind farms without support payments in Germany’s first auction for the technology. 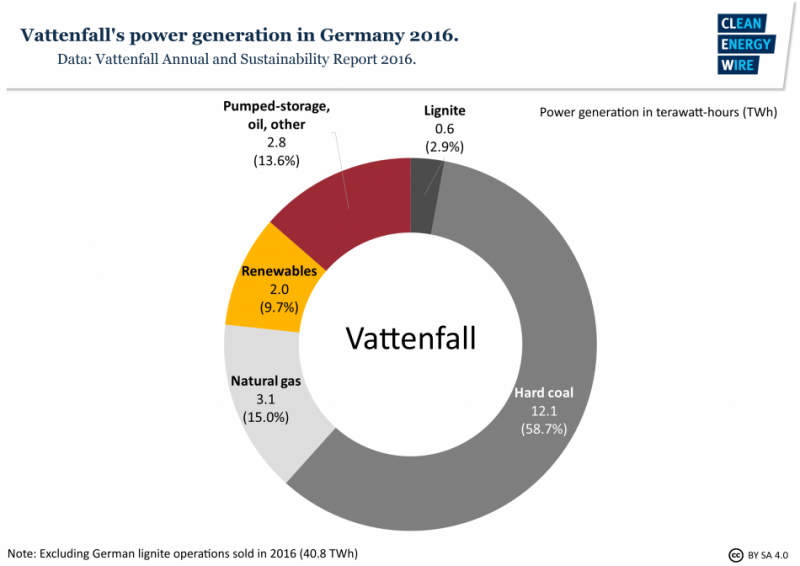 Vattenfall, is owned by the Swedish state and among Germany’s top four electricity providers, supplying 3.5 million power customers. Vattenfall’s subsidiary Stromnetz Berlin owns and operates the capital’s electricity grid. The sale of its German lignite operations to Czech energy company EPH in 2016 halved the number of its employees in the country to about 7,000 people. Vattenfall had previously been operating five opencast lignite mines and four lignite-fired power stations in East German Lusatia.