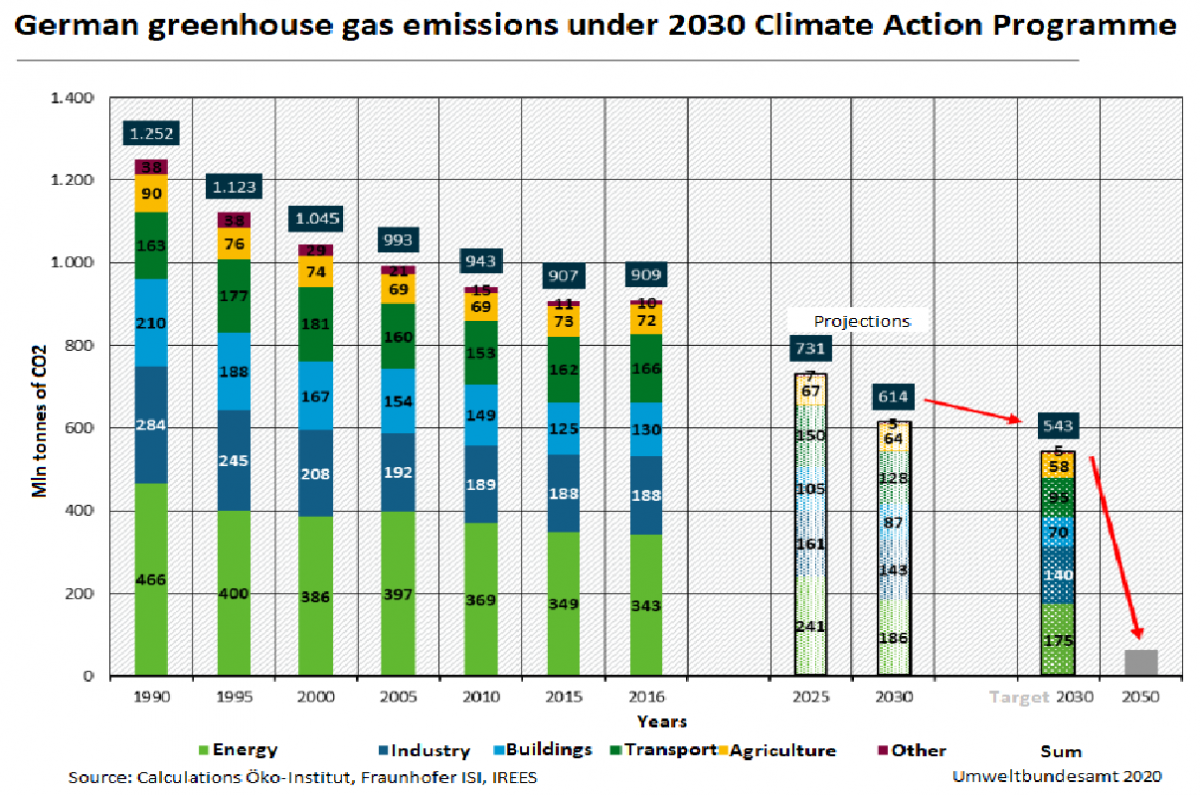 Germany's massive policy push to reach 2030 climate targets is insufficient, two studies commissioned by the government have found. Despite the agreement on a coal phase-out, the introduction of a CO2 price and a host of other measures, CO2 emissions will likely exceed the target by around 70 million tonnes in a decade, mainly because of shortcomings in transport and the heating sector. Environment minister Svenja Schulze and transport minister Andreas Scheuer conceded that additional efforts are needed. An EU decision to step up 2030 climate ambitions expected this summer, and Germany's stuttering renewable roll-out, add further pressure on the government to get its act together. [UPDATE with statements Scheuer, utility association, NGOs]

The German government's comprehensive 2030 climate package announced last year will likely fail to reach its objective and not bring about the desired carbon emissions reduction, two analyses commissioned by the country's environment ministry (BMU) and the economy ministry (BMWi) have found. The BMU study says emission reduction by the end of the decade will stand at about 51 percent compared to 1990 levels, instead of 55 percent, the target set in the government's Climate Action Programme. While the study expects emissions reduction in the electricity sector and industry to largely comply with government plans, progress in transport and heating is seen to be especially off track.

"On the basis of the current climate action programme, the climate targets for 2020 and 2030 will not be reached," the analysis conducted under the aegis of the Institute for Applied Ecology (Öko-Institut) found. The government promised to commission an independent assessment of its effectiveness after launching the package in September 2019. Measures in the programme, such as a national carbon price on transport and heating or the mass roll-out of electric cars, as well as the parallel coal phase-out are supposed to reduce Germany's emissions to 543 million tonnes of CO2 by 2030, from 858 in 2018. However, the study found emissions reduction will fall short by about 70 million tonnes.

Environmental NGOs said the emissions gap was not a surprise given insufficient government action. "The shocking thing about these documents of climate action failure is that they were totally predictable," said Greenpeace climate expert Tobias Austrup. Friends of the Earth Germany (BUND) said it was a "failure waiting to happen."

The climate package's deficiencies could be further aggravated by a possible decision of the European Commission to tighten the bloc's Europe-wide 2030 emissions target. The commission under Ursula von der Leyen mulls increasing the target from 40 to up to 55 percent reduction in the context of the new EU Climate Law. Germany is under pressure to forge an agreement among member states, as it will hold the EU Council Presidency in the second half of the year and thus host a highly-anticipated EU-China summit in September in which the two actors are expected to coordinate their climate policies ahead of the UN climate conference COP26 in Glasgow at the end of the year.

Blame on transport and heating

Despite the analysis' negative conclusion, environment minister Schulze said the government's approach could still be considered a success. "The climate package allows us to make a wide step forward. I think that's encouraging. It does a lot more than many would believe," Schulze said, conceding that additional measures are required "to accomplish also the missing percentage points."

A second study commissioned in parallel by the economy ministry (BMWi) and carried out by consultancy Prognos yielded slightly more optimistic but ultimately similar results, with the differences mainly stemming from differing assumptions about the number of e-cars on German roads in 2030, news website Der Spiegel reported. 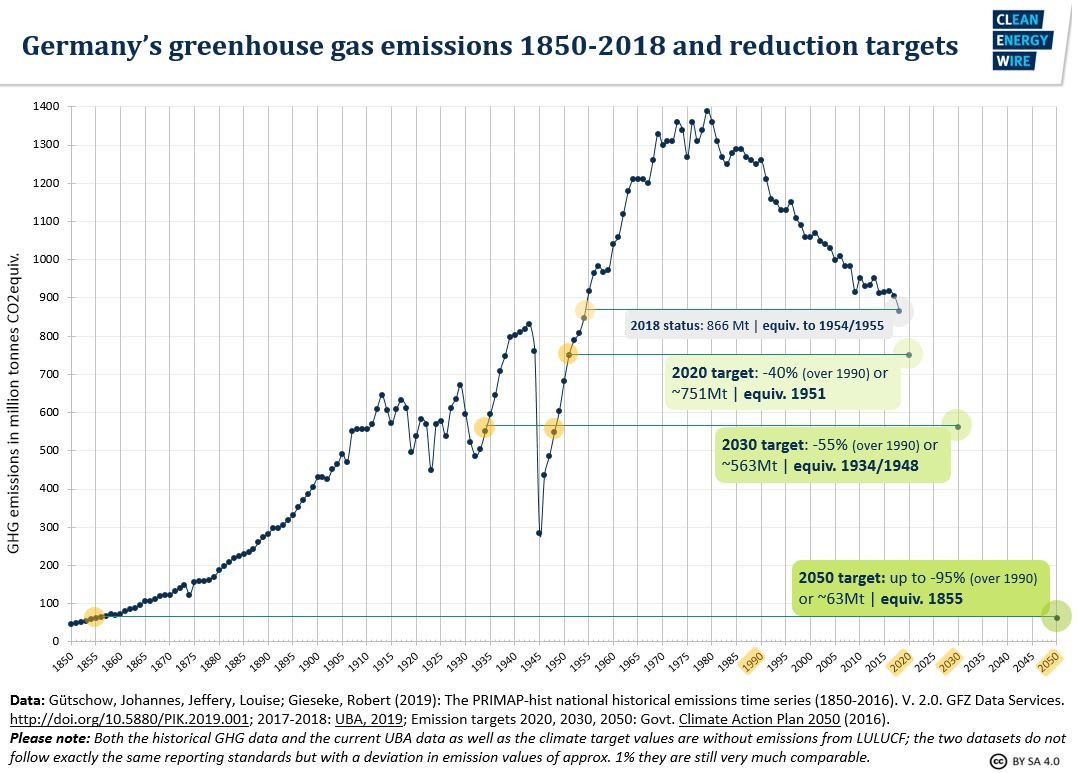 The sluggish emissions reduction in the buildings and heating sector can to a large extent be traced back to factual obstacles, such as a lack of skilled craftsmen needed to build new and more energy-efficient buildings. The transport sector's shortcomings, on the other hand, are often tied to more political reasons, given that the automotive industry is one of the country's biggest employers and deeply rooted in regional economic structures.

The results pour cold water on plans by transport minister Andreas Scheuer, who had presented a list of nearly 50 measures supposed to slash emissions in the sector. The analyses found that the steps are far insufficient, because they will likely bring emissions down to about 125 million tonnes in 2030, rather than to 95 million as required by climate targets. "A lot still needs to be done in the transport sector," environment minister Schulze said, calling the results "a clear warning sign". She said the results must be a call for action for the climate cabinet, of which she and Scheuer are members because they are in charge of climate-relevant policy areas.

Scheuer conceded that additional measures are required to clean up the transport sector and said his ministry will examine which measures can be sped up or extended, according to news reports.

However, the analysis also found that emissions reduction in industry and the electricity sector could at least remain on track in the event of favourable developments and assumptions. "The good thing is: wherever policies have already been successfully adopted, we're mostly on track, for example regarding industry emissions or the coal phase-out," Schulze commented.

The studies fall in line with another analyses by energy policy think tank Agora Energiewende*, which just this week stated that Germany urgently requires an expansion boom of renewable energy sources to cushion the effects of the country's parallel nuclear and coal exit and replace vanishing traditional production capacity with domestic wind or solar power, rather than with power imports from neighbouring countries, such as coal-intensive Poland or nuclear-based France. However, the expansion of onshore wind power, Germany's most important renewable power source, has dropped substantially over the past two years, raising doubts whether the required renewables capacity can be reached. Utility association BDEW said the studies underlined the urgent need for government action to speed up the flagging renewables roll-out. "The companies are ready, but they need adequate framework conditions."