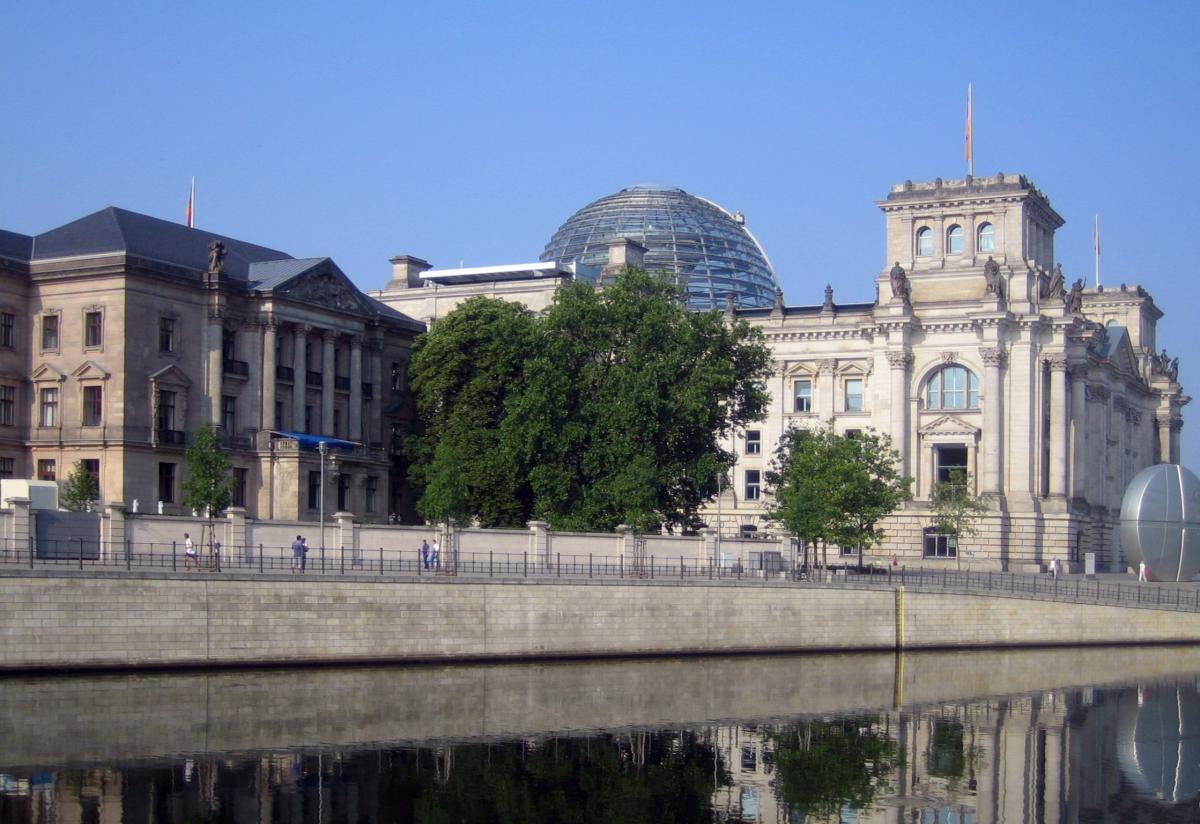 The Presidential Palace (left), where coalition talks are held, next to the German parliament. Photo: Manfred Brueckels
Germany's aspiring coalition partners continued talks past a second deadline on Sunday, 19. November, after having made little headway in key climate and energy issues in exploratory talks that had already gone past the first self-imposed Thursday target date. After four weeks of deliberations, the three political camps also failed to find compromises in many other policy areas. The talks will now resume on Friday, and might stretch into the weekend. [Updates with missed deadline]

Germany's aspiring coalition parties moved past a second deadline for exploratory talks for a new German government, as media reported that the parties were still at loggerheads over immigration and climate policy. The parties still aimed at concluding talks on Sunday, the reports said. The head of pro-business party FDP, Christian Lindner, said entering the talks on Saturday, that Sunday 1800 CET was the deadline. His deputy Wolfgang Kubicki added: "If we can't get it done by Sunday, 1800 CET, it is dead."

After Chancellor Angela Merkel had initially scheduled the talks between her conservative CDU/CSU alliance, the FDP and the environmentalist Green Party to end on Thursday, negotiators failed to reach tentative agreements on climate, energy, transport, migration and many other topics. Parties decided in the early hours of Friday to extend the talks for at least one more day, and possibly even into the weekend, a source close to the talks told the Clean Energy Wire.

The source denied media reports that substantial progress had been achieved in climate issues overnight. An offer by Chancellor Angela Merkel’s conservatives to cut coal-fired power production by 7 gigawatts (GW) by 2020 was rejected by the Green Party. “There’s been no noteworthy progress on coal”, the source told the Clean Energy Wire. Other policy areas that are still highly controversial, such as transport policy, had “not even been touched yet” in the supposed final round of exploratory coalition talks, the source added.

Chancellor Angela Merkel’s conservatives, the Green Party and the pro-business FDP were at odds over the exact level of emissions reduction that Germany needs to meet its 2020 national climate protection targets. Newspaper Der Tagesspiegel reported the Greens called the conservative coal offer a “bluff package”.

Conservatives and FDP initially offered a phase-out of 3 to 5 GW coal capacity, whereas the Greens said 8 to 10 GW were necessary to meet Germany's 2020 emissions reduction targets. The conservatives’ offer was focussed on power from lignite, and production cuts would have to be agreed on with plant operators, public broadcaster ARD reports.

Germany has made climate protection one of its priorities in its Energiewende, a dual shift from fossil fuel and nuclear power to a renewables-based energy system. It aims to reduce greenhouse gas emissions by 40 percent compared to 1990. But an increase in emissions in 2016 meant they had only declined 28 percent, and a likely further rise this year makes reaching this target even more difficult.

Chancellor Angela Merkel disappointed hopes for a strong statement on Germany’s climate goals and the future role of coal during her eagerly anticipated speech at the global climate conference COP23 in Bonn this week. The country’s 2020 goal was "ambitious", Merkel said. "Now, at the end of 2017, we know that we’re still lagging quite a bit."

A fresh poll revealed on Friday that a majority of Germans (64 percent) are in favour of closing coal power plants in order to reach 2020 climate targets, even if this move would cost jobs or push up electricity prices. In a survey by public broadcaster ZDF, 31 percent of respondents said they were against such measures. 57 percent said Germany does not do enough to protect the climate, while only 8 percent said the country did too much. Earlier this week, a poll by the Institute for Advanced Sustainability Studies (IASS) showed that even in federal state with lignite mining, a majority of the population was in favour of a coal phase-out.

Outgoing environment minister Barbara Hendricks, a Social Democrat, said at the COP23 that "of course people realise – and not only the international media – that as of today, Germany will not reach its 2020 climate targets."

"That’s also a topic in the ongoing talks to form a new government coalition," Hendricks said. "Of course it left a mark with us that Germany received the fossil of the day a couple of days ago. That must also be a wake-up call to the Jamaica negotiators.“

During the so-called Jamaica coalition talks, party differences had been even greater in migration policy, in which the parties were still “lightyears” apart, according to the Tagesspiegel. The Greens want to allow family members of refugees to reunite with them in Germany whereas the conservatives reject this option to limit immigration.

In spite of the apparent contention between the different political camps, senior party representatives insisted that finding a compromise remained everyone’s aim and also was more likely than it appeared from the outside. FDP head Christian Lindner said a project “of historical dimension” like a so-called Jamaica coalition “must not fail just because a few hours of negotiations are still necessary”. The parties’ chief negotiators had found common ground in many policy areas, Lindner said.

CDU negotiator Peter Altmaier said a coalition was possible if everyone involved sincerely worked towards it. Green Party co-leader Cem Özdemir said the length of the negotiation talks’ overtime “depends on the referee”, likely referring to Chancellor Merkel without naming her explicitly.

Green co-leader Katrin Göring-Eckardt said on Twitter, she was “not sure” if the talks would eventually succeed. The Greens had “repeatedly made compromise offers” and “reached pain barriers” without success, she said. However, the party would remain “ready to talk”, no matter how long it took.

A three-way ‘Jamaica coalition’ is the only politically viable government option after parliamentary elections in late September.

However, even if a compromise will be found after about four weeks of exploratory talks, this does not necessarily herald the beginning of a new government coalition. After a tentative agreement, the parties will deliberate internally whether they move on to official coalition negotiations, which are likely to take several weeks as well.

The Green Party will hold a party convention on 25 November where delegates decide if the party should proceed to official negotiations. In the internal party vote, the Greens will allow delegates to effectively call off further efforts to form a new German government. Also within the conservative alliance and the FDP, any deal must still pass muster with lower-ranking party officials before formal coalition negotiations can begin.