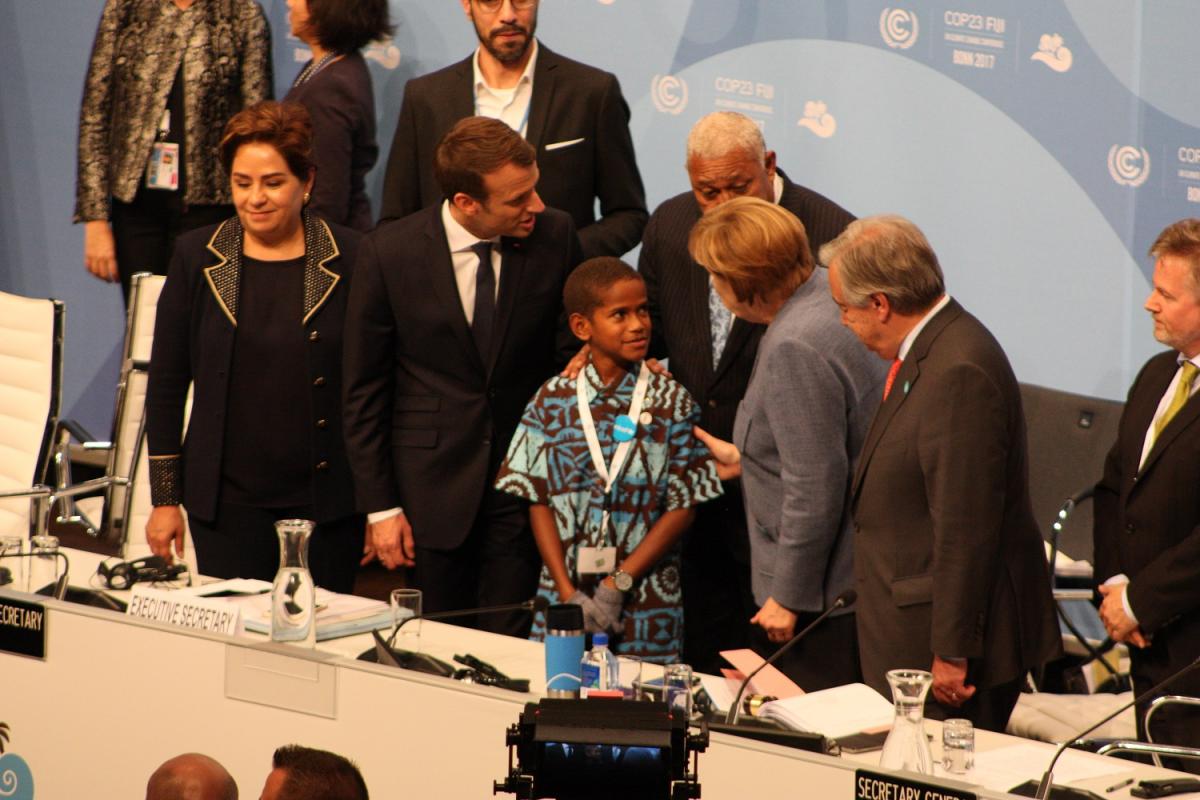 Chancellor Angela Merkel disappointed hopes for a strong statement on Germany’s climate goals and the future role of coal as she called on the world to walk the talk on climate at the global conference in Bonn.

“This conference must send out the serious signal that the Paris Agreement was a starting point, but the work has only begun.” Today’s pledges in the nationally-determined contributions were not enough to keep global temperature rise below 2 degrees Celsius, she said. “Now it’s about walking the talk.”

Merkel said that climate change remained a defining global issue. It would decide whether people would continue to be able to live on the Pacific islands. However, it was not easy –to match concrete measures to long-term climate protection strategies, she told the high-level delegates in the room, including French President Emmanuel Macron and other global leaders.

Germany’s 2020 goal of reducing greenhouse gas emissions by 40 percent compared to 1990 levels is "ambitious", Merkel said. "Now, at the end of 2017, we know that we’re still lagging quite a bit." This question played a significant role in the ongoing talks to form the next federal government coalition. These talks were about fulfilling the existing pledges, but also about “social questions and jobs – for example when talking about reducing [the role of] coal – and about profitability and the affordability of energy", she said. “I want to tell you that also in a rich country like ours, there are significant conflicts about this in society – and we have to solve them”, said Merkel.

Coal, especially lignite, had to “significantly contribute to reaching the targets. But how exactly - that’s what we will have to discuss very precisely in the coming days”, said Merkel.

NGOs criticised Merkel for dodging the question of how she intended to ensure that Germany will reach its climate targets. “This message from the host of a world climate conference must sound cruel to the poorest countries most strongly affected by climate change”, commented Oxfam Germany’s climate expert Jan Kowalzig. Germany ran the risk of missing its climate goals, while in Berlin “three out of four parties to a potential Jamaica coalition’ block the measures needed to prevent such an embarrassing failure”.

Greenpeace Germany’s Managing Director Sweelin Heuss said that Merkel “avoided to give the only answer she had to give in Bonn: When will Germany fully exit coal?” Without a coal exit, Germany could not meet the pledge it made in Paris. “That's a disastrous signal coming out of this climate conference”, said Heuss.

French President Emmanuel Macron, who spoke directly after the chancellor, said that the summit should send the message that “we can all come together” to mobilise the necessary public and private funds to act on climate. To guarantee quality science needed to make climate policy decisions, Macron proposed that the EU should fill the financing gap for the IPCC left open by the US administration’s decision to reduce funding. “France will meet that challenge, and I would like to see the largest number of European countries by our side,” said Macron. “All together, we can compensate for the loss of US funding.” 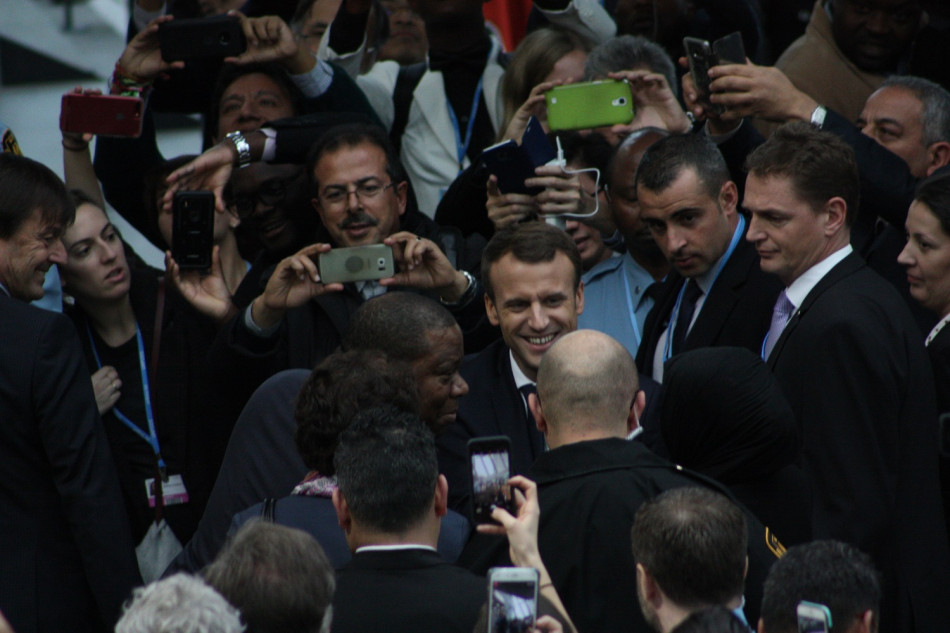 At the opening of COP23’s high-level segment, Fijian President Frank Bainimarama called on the country representatives to remain focused to ensure a successful outcome to the conference. “Future generations are counting on us. Let us act now”, he said.

Ahead of Bainimarama’s speech, a young boy from Fiji recounted the story of how his home was destroyed in a recent natural disaster, asking government representatives in the room “What can you do?” to protect the climate. “Climate change is here to stay, unless you do something about it”, he told the delegates.

Germany’s President Frank-Walter Steinmeier said that recent extreme weather events have shown that time was pressing. “I have no doubt that this urgency warns us to make haste and act decisively”, he said. The “historic climate agreement” reached in Paris in 2015 and “the path we have taken since” must remain irreversible. “Paris can only be called a breakthrough if we follow up on the agreement with actions”, said Steinmeier.

The president said that small and vulnerable states deserve a successful conference, as addressing the challenges of climate change is “also a question of global fairness”.

Pressure on Merkel had been building as her attempts to form a new government coalition remain stuck over the question of phasing out coal and other climate issues. Dubbed the "climate chancellor" for her previous stance on the environment, Merkel’s record has come under increasing scrutiny. Germany looks set to miss its own 2020 emission reduction target by a wide margin and carbon emissions will even rise again in 2017.

“Climate chancellor with empty hands”, read the eco-newsletter, handed out every morning to the several thousand delegates trying to make progress on the Paris Agreement.

Representatives from science, climate activists, and small island states appealed to Merkel to meet the country’s 2020 CO2 reduction target ahead of her much-anticipated speech.

Hans Joachim Schellnhuber, from the Potsdam Institute for Climate Impact Research (PIK), said Germany had the ability to quit coal use but instead there was the “perverse” situation where it generated power from coal, which then was exported.

“Angela Merkel has been a great climate champion but her credibility is hanging in the balance,” Jennifer Morgan, Executive Director of Greenpeace International, said.

President Hilda Heine, of the Marshall Islands, added: “We are just two metres above sea level. For Germany to phase-out coal and follow a 1.5°C pathway would be a signal of hope to us and all other nations in danger from climate change.” Merkel is due to speak at 1600 CET, followed by French President Emmanuel Macron and other high-level country representatives.

“Having a good plan is not a sufficient condition for success, but not having one is always a recipe for failure,” Richard Baron, executive director of the 2050 Pathway Platform, quoted Fijian prime minister Frank Bainimarama at a morning press conference. The platform, launched a year ago, is an initiative to support countries seeking to develop long-term, net zero-greenhouse gas, climate-resilient and sustainable-development pathways.

But its work was not so much about target setting, said Baron. “I think it’s more about thinking through what the pace of key decisions is going to be,” he explained. To develop the long-term strategies, governments need to also look at near-term infrastructure investment, regulatory and policy decisions. For example, a country’s decision to partly switch from coal to natural gas to achieve several percent of greenhouse gas emissions reduction might work in the short term, but lead to stranded assets when aiming for 100 percent renewable power supply by mid-century.

Germany last year presented its long-term strategy, the Climate Action Plan 2050, at the UN climate conference in Marrakech. It sets individual greenhouse gas emissions reduction targets for each economic sector for the year 2030.

For Germany to reach its goal of largely carbon neutrality by 2050 and stay in line with the Paris Agreement’s 2 degree target, 2030 was an important step. “It’s a must for us to reach our 2030 milestone of minus 55 percent emissions,” said state secretary in the environment ministry Rita Schwarzelühr-Sutter.

There is a general lack of ambitious targets and sufficient implementation for a Paris-compatible pathway by countries across the globe, said the authors of the latest edition of the Climate Change Performance Index 2018 by Germanwatch, Climate Action Network (CAN) International and New Climate Institute, presented in Bonn today. “No country is on a Paris-compatible path yet.” The index leaves ranks 1-3 empty.

It keeps track of efforts in combating climate change by 56 countries and the EU, which are together responsible for about 90 percent of global greenhouse gas emissions. The index ranks the countries by the categories: 1. emissions, 2. renewable energy, 3. energy use and 4. policy.

Germany, the technical host of this year’s COP23, is ranked 22nd.

“Rank 22 is of course not satisfying for the ‘country of the Energiewende’, said co-author Jan Burck of Germanwatch at the presentation in Bonn. “We see good grades for Germany in international climate policy, but bad grades for the national policy.”

While there were good developments on renewables in the electricity sector, the country was still “world champion on burning lignite” and not on track to meet its 2020 emissions reduction target, he said. “It is absolutely crucial that the ongoing coalition negotiations come to an agreement on a coal phase out and getting a transition in the transport sector started.”