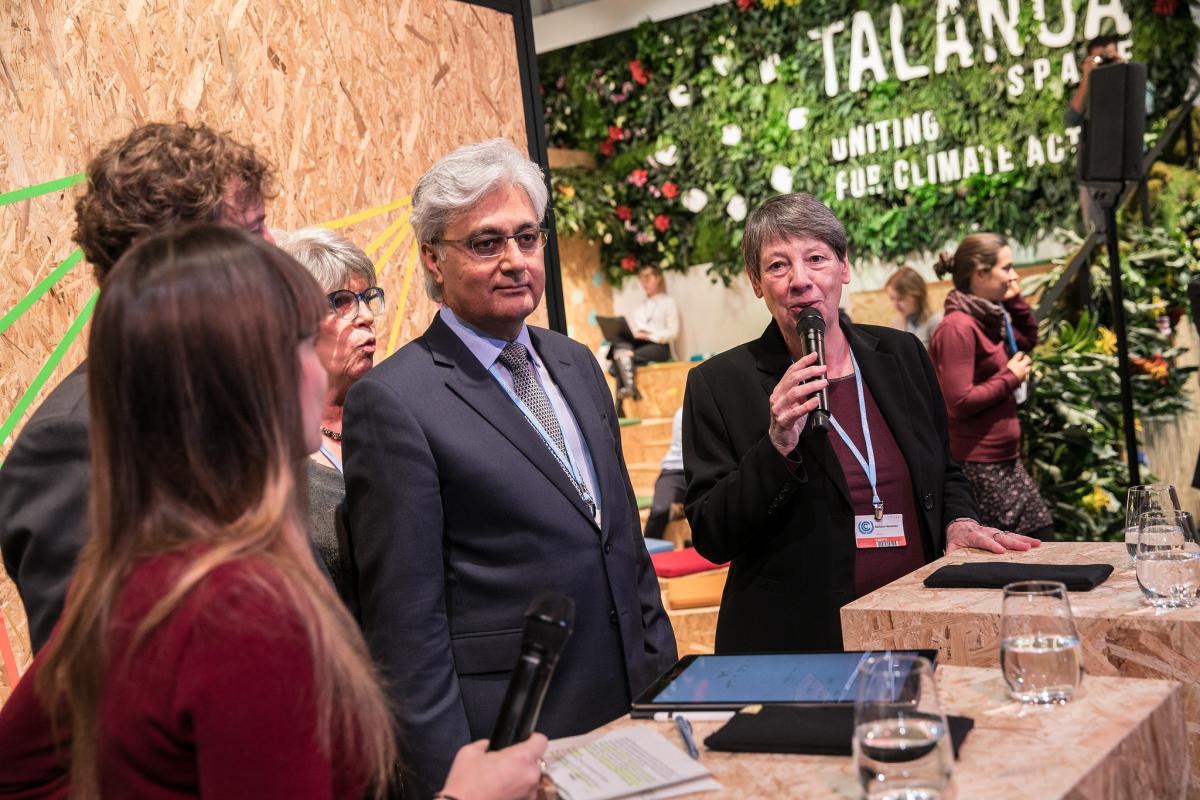 German environment minister Barbara Hendricks (right) received the EMAS certificate for a sustainable COP. Photo: BMUB/Sascha Hilgers.
Bonn had delivered what was necessary to be on schedule for the decisions needed at COP24 in Katowice, the Germany delegation said / Negotiations finished in the early hours of 18 November / Last contentious issues still debated through the night included adaptation funding and the Talanoa Dialogue / Germany's reputation "tarnished" by possibly missing climate targets - observer / US team “constructive and neutral” / Rising tide of climate litigation

Goal of the conference reached, we are on time – German delegation

Delegates at the global climate conference still had several issues of contention to solve as the official end  of the conference in Bonn approached on Friday, German Environment Minister Barbara Hendricks told members of the media at her team’s wrap-up press conference in Bonn. Among them were adaptation funding, the design of the Talanoa Dialogue and Turkey's demand for climate finance, the German delegation said. I the early hours of 18 November parties agreed on a draft decision paper.

Questions on when and how developed countries would need to announce what kind of financial support they would provide to countries in need were issues “left for the last hours”.

State Secretary Jochen Flasbarth said developing countries understandably needed to know what kind of aid they could expect for their planning security. However, “for us this is a budgetary regulation problem. We cannot determine every detail over several budget periods”, said Flasbarth.

There was more progress in designing the Paris Agreement rulebook. Flasbarth said that every opinion by the country delegations on the rulebook was available in text form, but they were not yet sorted and assessed. While there were even contradicting statements left, the important thing was to have them on paper and to be able to work on them. “The worst case would have been to continue the journey with empty sheets of paper,” said Flasbarth. That meant that the goal of the conference was reached and everything was on schedule to be concluded in Katowice 2018.

On Saturday morning, the German government said that one of the main achievements of the Bonn conference was the so called Talanoa Dialogue. This mechanism will be overseen by Fiji and Poland and will serve as a trial stock take of the parties' climate action, intended to motivate countries to increase their efforts to combat climate change.

Another unresolved issue that was keeping negotiators busy till the last hours of the conference was Turkey’s demand to become a recipient of support from the Green Climate Fund. Germany’s state secretary Flasbarth had been assigned to moderate the conflict between Turkey and the G77 group of developing countries but wasn’t able to resolve it.

He had made a suggestion for a compromise on how Turkey could receive climate finance from multi-donor projects involving the Green Climate Fund but without actually getting money from the fund, Flasbarth said. “In the end this wasn’t enough for Turkey but it was too much for the G77,” he said. Some developing countries had also not been very understanding that precious negotiating time was used for Turkey’s problem, he said.

As the largest international conference ever held in Germany approached its official end on Friday, the environment ministry host took stock, saying that the concept of "one conference, two zones" had been a success, that 11,000 delegates, 9,500 observers and 1,200 had attended the summit - and consumed 25,000 cups of coffee at the German pavilion.

Environment minister Barbara Hendricks said the COP23 had fulfilled expectations from the German government for this conference under the Fijian presidency and with Germany as the technical host.

“Everyone works on climate protection, everyone wants to join. That’s the spirit of Paris,” said Hendricks. There was a new common ground on climate protection between north and south, and between poor and rich. “And during these two weeks, we felt that new spirit here in Bonn.”

Fiji being the president put a spotlight on the small island states. “More than ever we were able to put the world public’s focus on the most vulnerable in these past two weeks,” said Hendricks. “This focus has never existed before.”

As the technical host country, Germany's domestic climate record had been under intense scrutiny over the past weeks, starting with anti-coal protests in the days leading up to the conference start and ending with disappointed hopes when German Chancellor Angela Merkel failed to make a strong statement on Germany’s climate goals and the future role of coal as she called on the world to walk the talk on climate at the global conference in Bonn.

Environment minister Hendricks said her delegation hadn’t been asked about Germany missing its 2020 climate target very much by other negotiators, but of course NGOs frequently raised the issue. “Germany receiving the fossil of the day award a couple of days ago has left a mark with us.”

“If you can’t keep the commitments you make at home, it does tarnish your international reputation,” Alden Meyer, director of strategy and policy for the Union of Concerned Scientists (UCS), told the Clean Energy Wire. “If you’re going to talk about the urgency of climate action and the mounting impacts and the damages to poor and vulnerable people around the world, then you have to back that up with real action.” If the perception was that Germany was “not making the tough decision to phase down coal use” and ensure the economic transition for workers and communities, “then that could harm [Germany’s] effect in this international negotiations process”, said Meyer.

US team “constructive and neutral”

One of the biggest unknowns debated in the run up to the climate conference in Bonn was how the US delegation would position itself in the talks. US negotiators acted “constructively and neutral”, according to environment minister Hendricks. “That was professional, as it should be when diplomats are at work.”

German NGOs welcomed the “We are still in” campaign by states, cities, businesses and civil society to show their commitment to the Paris Agreement. “That significantly helped to keep up the spirit of Paris,” said WWF Germany’s Michael Schäfer.

As more and more legal cases on climate change are heard and decided, large CO₂ emitting corporations are increasingly under pressure and investors are beginning to adapt their portfolio. “A rising tide of new and innovative initiatives and court cases around the world are helping to hold big polluters and big emitters accountable for climate change impacts,” said Lili Fuhr of Germany’s Heinrich Böll Foundation, a think tank that is close to the German Green Party, at a press conference in Bonn.

“The question is: Can and should the carbon majors be held accountable for climate impacts?” said Carroll Muffett, president and CEO of the Center for International Environmental Law (CIEL). According to a new CIEL report, the answer is yes. What has changed over the past years is that on the one hand courts have begun to recognise that these issues are judicable in the first place. On the other hand, the science itself underlying the cases has been improving exponentially, and more and more evidence has come to light demonstrating what corporate actors knew about climate change and when they knew it, said Muffett.

The rising tide of litigation helped the investment community recognise that fossil fuels were a risky business, said Muffett. Christoph Bals from NGO Germanwatch added that “this changes the game for investors.”

A prominent example of such a court case was that of Peruvian farmer Saúl Luciano Lliuya, who this week achieved his first success in his lawsuit against German energy company RWE. Lliuya, who is supported by NGO Germanwatch, says that his village is under the threat of flooding from a melting glacier brought on by climate change, and that RWE, operator of Germany’s most polluting utility, is partially responsible for this. He wants RWE to pay for protective measures around the glacial lake near the village proportional to its share in global emissions (around 0.5 percent, according to Germanwatch) that have caused global warming.