When it comes to decarbonising the economy, Germany is nowhere near as ambitious as the government likes to say, writes Silke Kersting in a commentary for the business daily Handelsblatt. She says this is demonstrated by the battle over the coal levy, which has lasted for months. Chancellor Angela Merkel failed to give her blessing to the proposed climate levy before the G7 summit, even though cutting CO2 emissions from coal plants is crucial to achieve climate targets. “But there is no doubt: The path to future climate protection must be rigorous, or even ruthless, if success is to be achieved on a national and international level,” Kersting writes.

“At least a beginning”

The mere fact that G7 countries announced their intention to decarbonise the global economy might have profound consequences, writes Michael Bauchmüller in a commentary for the Süddeutsche Zeitung. “When the seven most powerful nations on earth realize that today’s energy supply can’t be tomorrow’s under any circumstances, this will influence investments," Bauchmüller writes. "Banks will think twice before they finance the exploitation of additional fossil resources.”

But Bauchmüller also says the German experience illustrates the difficulties of bidding farewell to a fossil past. The country boasts of the Energiewende's successes but prefers to keep quiet about recent emission statistics. He adds that failure to agree on the proposed coal levy would not bode well for the future of the G7 agreement.

Angela Merkel is working intensely to strip German industry of coal, oil and gas, writes Heike Göbel in the Frankfurter Allgemeine Zeitung (FAZ). While the G7 pursue the decarbonisation of the global economy by the end of the century, Merkel is following particularly ambitious targets at home that are only achievable at extremely high costs. The newly proclaimed “total energy transition”, as Göbel calls it, will push the price of German climate action still higher. But the Federation of German Industries lacks the courage to explain that a Europe-wide energy transformation must come at as low a cost as possible, she says. Göbel calls on industry to soberly enlighten wider society about the economic repercussions of “exaggerated climate policy”.

Hans Joachim Schellnhuber, director of the Potsdam Institute for Climate Impact Research (PIK) described the G7's new climate action targets as “substantial”,  in an interview with the Frankfurter Rundschau. The full decarbonisation the countries agreed to by the end of the century should be completed by 2070, he said. Asked if the world could really overcome its decpendency on coal and oil, Schellnhuber said it wouldn’t make sense to allow two systems to run side by side, one based on nuclear/fossil fuels and one on renewable sources. Once the second system is established it could gain the upper hand within just two decades. “This way there will be a dynamic that spurs a very rapid transformation, as we currently see happening with renewables in Germany.” Decarbonisation could happen by the middle of the century – provided the political will is there, Schellnhuber said. “Decarbonisation is not a burden or a constraint, it is the opposite - a boost for the lame global economy,” he told the paper.

The G7's aim to decarbonise the global economy by the end of the century and to “transform the energy sector” – reads as if Angela Merkel has exported the German Energiewende, writes Fritz Vorholz in an opinion piece for ZEIT online. “By the end of the century” sounds deceptively far away, Vorholz says. If worldwide decarbonisation is to be successful, rich countries must abandon coal, oil and gas within the next 35 years. But 35 years for the “transformation of the energy sector” is next to nothing, he writes. Energy systems are slower to transform than most economic structures - so did the G7 leaders know what they were promising? Even if their declaration isn’t binding, they can now be held responsible when their actions oppose their words.

“Conflict over climate levy drags on”

A second meeting between energy minister Gabriel, trade unions and representatives of mining regions, did not yield an agreement on the coal levy on Tuesday, reports Andreas Mihm in Frankfurter Allgemeine Zeitung. Participants told Mihm negotiations would continue over the coming days. They seemed hopeful of an agreement before the coalition government's talks next week aimed and coordinating policy, Mihm writes. Angela Merkel and the head of her chancellery, Peter Altmaier, were also due to discuss the coal levy on Tuesday, sources told Mihm.

The German steel industry is unhappy with the country's energy policy and opposes the introduction of a levy on old coal-fired power plants, reports Süddeutsche Zeitung. The proposal would likely lead to a substantial increase in power prices, warns Hans Jürgen Kerkhoff, president of the German Steel Federation. Karlheinz Blessing, head of steel company Saarstahl AG, told the paper he expected rising prices for CO2 emissions to become an additional burden on the industry. But Hauke Hermann of the Institute for Applied Ecology insists the steel industry is not a victim of European energy and climate policy. Companies benefit from lower electricity prices, he told the paper, and could do much more to increase efficiency.

Federal Ministry for the Environment (BMUB)

The federal environment ministry's national climate action initiative (Nationale Klimaschutzinitiative, NKI) will have a greater focus on supporting climate action in municipalities and local communities, according to a press statement by the ministry. 19,000 projects have been implemented under the NKI since 2008, supported with over 555 million euros, which led to further investments of more than 1.15 billion euros. These initiatives helps to reduce greenhouse gas emissions by, for example, educating businesses and consumers about energy efficiency, promoting car-free holidays, helping companies to monitor and reduce their emissions, and building new sewage treatment plants.

See the statement and NKI website in German here.

Brown coal association DEBRIV has published a new sector profile (Braunkohle in Deutschland 2015), gathering data on mining and usage of lignite in Germany and the prospects for lignite in the German energy mix in light of national greenhouse gas reduction plans.

The International Renewable Energy Agency has published an extensive report comparing renewable energy targets around the world. “Some 164 countries around the world have adopted at least one type of renewable energy target as of mid-2015, up almost four-fold from 43 countries in 2005,” the intergovernmental organisation said in a press release. The report says the cases of Germany and Denmark highlight the positive impact of long-term targets, as they reassure investors and manufacturers. By 2050, Germany aims to meet 60 percent of its total energy consumption from renewables and Denmark 100 percent. 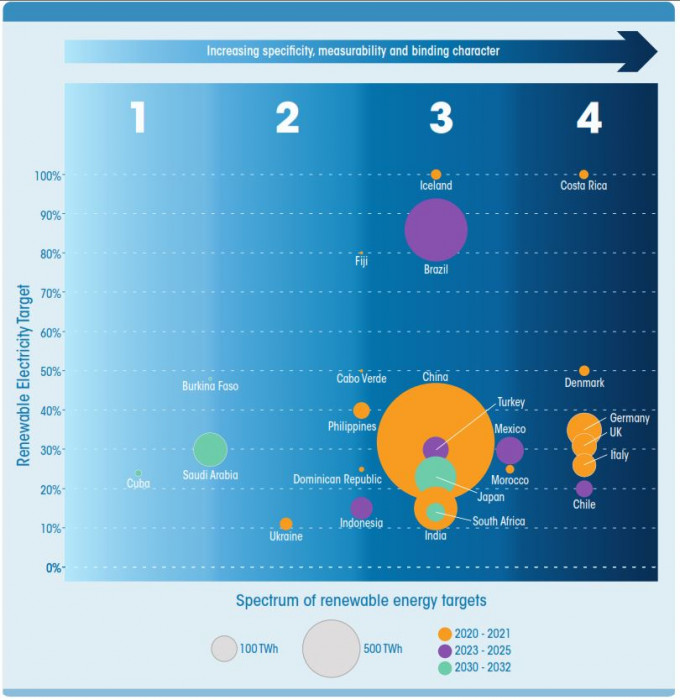 The Federal Network Agency has opened the second round of PV auctions for 2015. Solar project developers – including those who were unsuccessful in the first round of tenders earlier this year – can submit their bids until 1 August 2015. 150 megawatts of ground-mounted photovoltaic installations are on offer and the highest bid may not exceed 11.18 cents/kilowatt-hour. The second auction round follows the rules of “uniform pricing”, while the first round worked according to “pay-as-bid” rules.

Read a CLEW article about the first round of PV auctions here and an interview with auction designer Karl-Martin Ehrhart here.

The price of the cheapest new power contract for an average German household fell 6 percent in May compared to a year earlier, according to price comparison website Verivox. This reduction translates into a saving of 55 euros (down to to 817 euros) for a household consuming 4,000 kWh, said Verivox. The website said prices will probably fall further as wholesale prices have dropped around 11 percent over the same period.