Trump lashes out at Nord Stream 2, says Germany is “totally controlled” by Russia

US President Donald Trump has lambasted the German reliance on Russian energy resources, saying the country is “totally controlled by” and “captive of” the fossil fuel exporting giant, according to international media reports. “Germany is totally controlled by Russia, because they will be getting 60-70 percent of their energy from Russia and a new pipeline,” he told NATO Secretary General Jens Stoltenberg in Brussels. “They got rid of their coal plants, they got rid of their nuclear, they’re getting so much of the oil and gas from Russia.” Russian gas company Gazprom is currently building Nord Stream 2, a contentious new gas pipeline, which will connect Germany with Russia via the Baltic Sea. Speaking ahead of the summit of the transatlantic military alliance, the US president said: “We’re protecting all of these countries and then numerous of the countries go out and make a pipeline deal with Russia where they’re paying billions of dollars into the coffers of Russia. […] I think that’s very inappropriate.” Trump also criticised the involvement of former German Chancellor Gerhard Schröder, who is currently Chairman of the Board of Directors of Russian oil company Rosneft. Stoltenberg pointed out that even at the height of the cold war, NATO countries were trading with Russia, too. Trump reiterated his demand that Germany increase its NATO spending to two percent of GDP.

While it was unclear what Donald Trump was exactly referring to, none of the figures on German-Russian energy trade add up to anything close to the US president's numbers. The German Economy and Energy Ministry (BMWi) said “as usual” it would not comment on the US president’s remarks. However, a ministry spokeswoman told the Clean Energy Wire that the German government’s aim “is to reduce the dependence on fossil fuel imports – partly by pursuing the energy transition and increasing the share of renewables.”

Germany needed to import 63.5 percent of the energy it consumed in 2016, most of it oil, coal and gas. 40 percent of German crude oil and about 32 percent of hard coal imports came from Russia in 2016, while Germany uses its own lignite. Due to data privacy regulations, BAFA stopped publishing natural gas import volumes by country in 2016. However, it can be assumed that Russia, Norway and the Netherlands continue to be the main suppliers, according to the BGR. In 2015, 35 percent of gas imports came from Russia, 34 percent from Norway and 29 percent from the Netherlands. Russian gas exports to Germany have been on the rise in recent years.

The energy ministry spokeswoman said Germany’s energy supply security is high and the country disposes of a “diversified structure” for sourcing oil and gas. “Germany has the highest gas storage capacities in the EU,” she specified, adding that also the pipeline structure relies on several different supply routes. She put Russia’s share in German natural gas imports at “about 40 percent,” ahead of the Netherlands and Norway.

Watch a video of the statements in English here.

For background, see the CLEW dossier The role of gas in Germany’s energy transition and the factsheet Germany’s dependence on fossil imported fossil fuels. 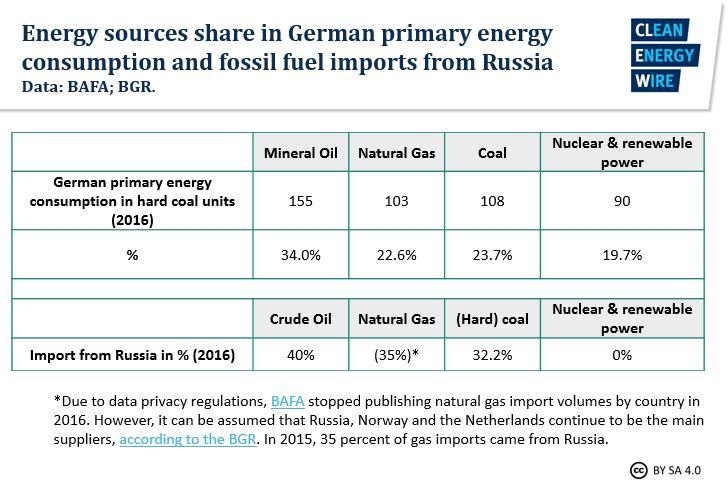 Private households in Germany paid more than 10 billion euros in taxes and levies on power consumption to the state in 2017, the German Taxpayer Institute (DSi) of the German Taxpayers Federation (BdSt) says in an analysis seen by the Clean Energy Wire. These calculations include the electricity tax, concession fees and turnover tax, but not the renewables surcharge. Together, they make up 28 percent of an average household’s power bill. As the turnover tax even needs to be paid on other taxes and levies, it could be considered a “tax on the tax”, DSi says. The turnover tax private households paid on the renewables surcharge alone amounted to 1.6 billion euros in 2017. The taxpayers’ federation is calling for a reform of the turnover and power taxes, for example a reduced VAT rate on electricity.

For background, read the CLEW factsheets What German households pay for power and Germany ponders how to finance renewables expansion in the future.

In an opinion piece in Frankfurter Allgemeine Zeitung, Andreas Mihm argues that the government is responsible for Germany’s high power prices, as it does not use the state budget to finance desired support like that for renewables, but passes the costs on to electricity consumers. Additional taxes and concession fees create an “ailing system”, because at the same time the government “incentivises increased (green) power use” for heat pumps or battery-powered cars, Mihm writes. He says it is outrageous that the state additionally puts a turnover tax on the other existing taxes and levies.

Buy the e-paper (in German) here.

For background, read the CLEW factsheet Germany ponders how to finance renewables expansion in the future.

Coal mining companies’ financial guarantees to remediate long-term damage from extracting the fossil fuel must be better secured, Green Party head Annalena Baerbock told news agency dpa. “Until now, the level of provisions has been based on calculations by coal companies. However, it’s been clear for a long time that these are much too low and not insolvency-proof,” Baerbock said. She added that the state should ensure parent companies are held accountable if subsidiaries face insolvency.

The current dry period in Germany will cause complete crop failures for some farmers, particularly in the north and east of the country, Bernhard Krüsken, general secretary of the German Farmers’ Association (DBV), told Friederike Meier in an interview for klimareporter.de. “In a way, this is climate change you can touch,” Krüsken said. Even if humans succeed in limiting global temperature rise, the agricultural sector will have to deal with the consequences. The sector is in a special position, as nutrition is “without alternative. You can’t just adjust or replace it as you can in industry or transport,” said Krüsken.

Find the interview in German here.

Germany’s coal-exit commission could provide useful lessons for other countries and sectors seeking to both decarbonise and protect workers, Pieter de Pous writes in a blog post published by E3G, a climate-change think-tank. However, Germany’s recently formed commission also runs the risk of delaying action on phasing out coal by pitting jobs against climate action, de Pous writes.

In 2020, stricter environmental regulations concerning pollution from seagoing vessels will come into force, putting added pressure on the German shipbuilding industry to innovate, according to an article in tageszeitung (taz). The industry is currently researching hybrid and multi-fuel powertrains that can use a variety of fuels, as well as electrical systems, liquefied natural gas (LNG), and synthetic fuels. Technologically advanced, German shipbuilding companies and offshore suppliers are positioned to “deliver the technology” for environmentally friendly drives, said Alexander Nürnberg, chairman of the marine equipment and systems (MES) working group in the German Engineering Federation (VDMA). However, the rise of protectionism threatens to deal a serious blow to the industry just as it needs to prepare for the new rules, Nürnberg argues.

German wind turbine manufacturer Nordex has received its largest order to date in the second quarter, FOCUS Online reports. The company has been contracted to build a wind park in northern Brazil with a total capacity of 595 megawatts. Analysts believe the order volume amounts to 500 million euros. In 2017, the Nordex Group generated sales of just under 3.1 billion euros.

Contracts for difference (CFD) for renewable energy funding are the best available method to pass on cost reductions in different renewable technologies to the average power customer, the German Institute for Economic Research (DIW) says in its weekly report. The current German renewables funding model of a “flexible market premium” that guarantees a monthly minimum price for their output will lead to rising costs in the long run. “If power generation costs keep falling vis-à-vis capital costs of renewables, sticking to the current funding model of a flexible market premium will partly offset the cost reduction with higher financing costs,” the study says. A model that does without any compensation for renewable power producers whatsoever will end up having the highest cost per megawatt hour (MWh) of all, the researchers say. The DIW authors say the large-scale introduction of CFDs in Germany could lead to an annual cost reduction of more than 800 million euros by 2030 and shield customers from power-price spikes.

See the CLEW factsheets How much does Germany’s energy transition cost? and Germany ponders how to finance renewables expansion in the future for more information.

Germans weigh climate against their wallets

Our visiting cartoonist Mwelwa Musonko (@MwelxTax) from Zambia on the result of many surveys that Germans support the energy transition in principle but grapple with the costs associated with it. 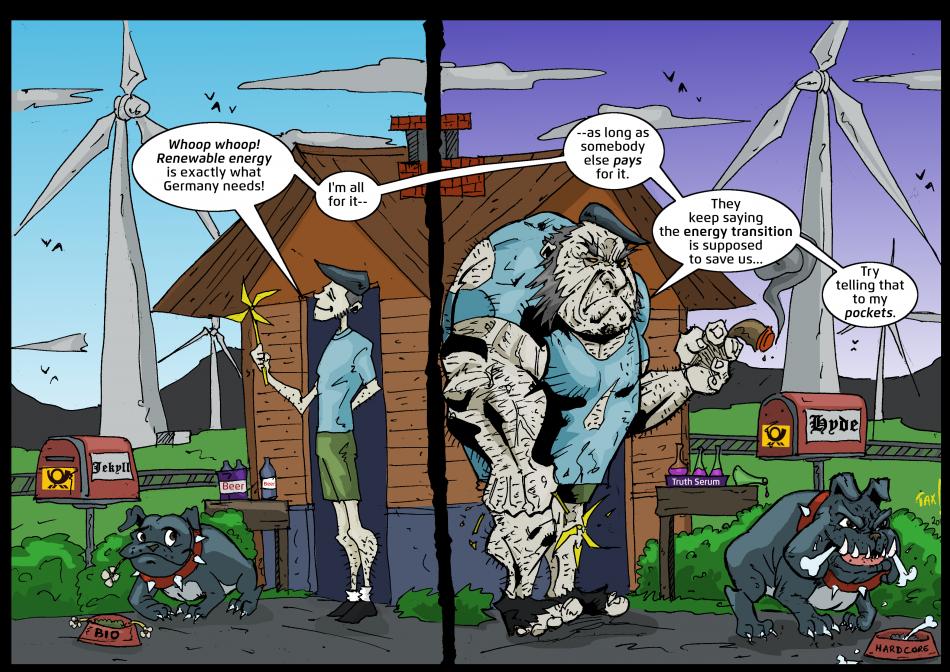