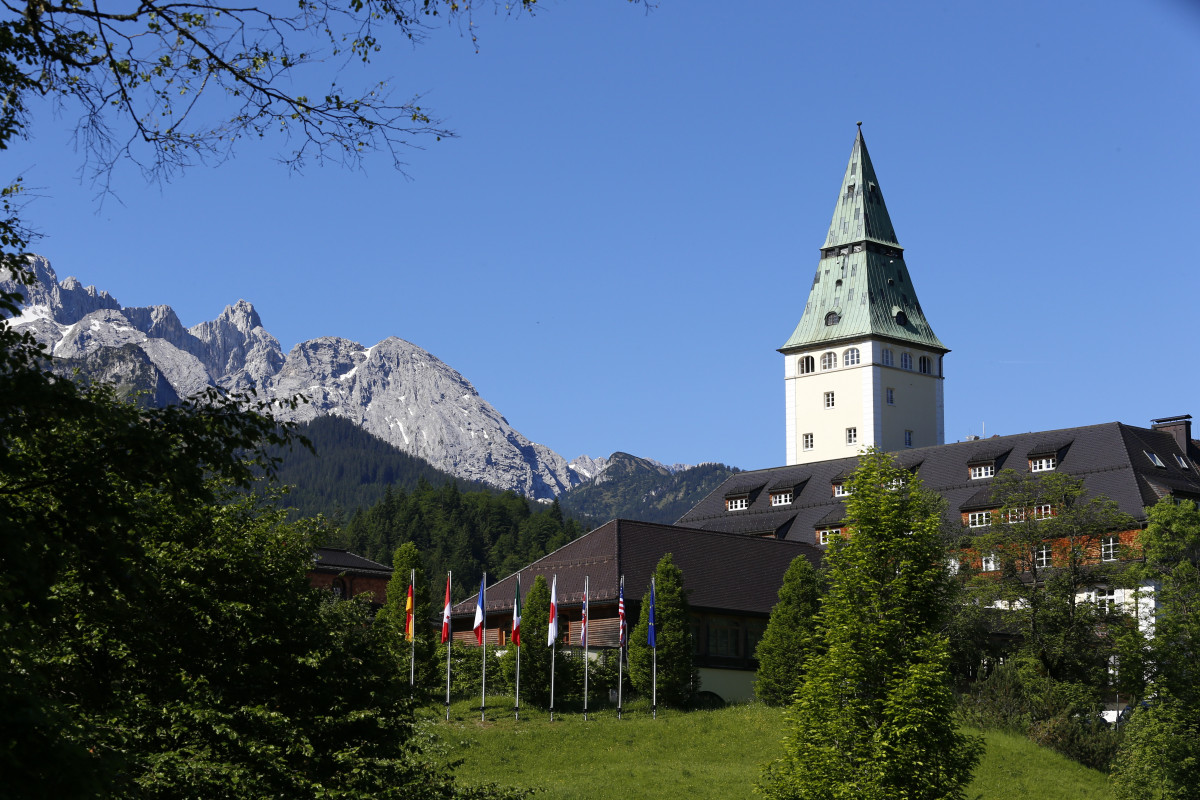 For a second time after 2015, Bavaria’s Schloss Elmau spa resort will provide the “scenic backdrop” for the G7 leaders' meeting. Photo: European Union.

The German government’s G7 agenda has been thrown off course by Russia’s war against Ukraine, but chancellor Olaf Scholz says he is determined to keep climate policy as a top priority for the summit of the seven large economies in Bavaria on 26-28 June. Whether leaders will reach ambitious and substantial agreements – such as a highly anticipated coal exit date – remains to be seen in light of an agenda bound to be dominated by the Russia-Ukraine conflict’s fallout on energy and food security. Germany is pushing the idea of international cooperation in a so-called ‘climate club’ of ambitious and like-minded countries, but observers have criticised this for being too vague. Whether plans for ‘just transition partnerships’ to support emerging and developing states in their move away from fossil fuels are advanced enough to be agreed at the summit also remains unclear. Climate activists are set to stage a series of protests to increase pressure on summit participants, who will convene in a secluded castle in the Alps.

Locked away from public scrutiny in a remote castle with beautiful views of alpine peaks, the Group of Seven (G7) major democratic economies are set to come together next week for their annual leaders’ meeting. For a second time after 2015, Bavaria’s Schloss Elmau spa resort will provide the “scenic backdrop” – as German government spokesperson Steffen Hebestreit put it announcing the location last December – for the talks among some of the world’s most powerful leaders.

Protected from all-but-certain protests by a massive police presence, G7 leaders will have the unavoidable focus on the fallout of Russia’s war against Ukraine – leading to concerns that after two years of pandemic neglect, the climate crisis would still not get the urgent attention it deserves.

However, host country Germany intends to keep emission reductions high on the agenda. Chancellor Olaf Scholz has said the G7 must not neglect this global challenge and cooperate closely – “now more than ever” --, adding the move to climate neutrality has become more important as renewables are key to ending dependence on Russian fossil fuels.

“The war will undoubtedly feature high on the G7’s agenda, but I don’t think it will completely derail it,” says political analyst Ella Kokotsis of the G7 and G20 Research Groups. She says the German G7 presidency has long emphasised that the climate crisis is a central issue and expects strong leadership from Scholz. “The German G7 presidency is very well positioned to make a difference on climate change in Schloss Elmau.”

G7 leaders at the summit in Elmau 2015. Photo: European Union.

Other experts are less optimistic. “Climate should be at the very top of the summit agenda, because the solutions to the crisis are also the best energy security responses,” says Luca Bergamaschi, co-founder of the Italian climate change think tank ECCO. “The question is whether leaders recognise this, or prefer to invest in fossil fuels and thus create dependencies and increase the risk of overshooting 1.5°C.”

When Germany presented its G7 presidency priorities in January – one month ahead of the start of the war – it set a clear focus on improving coordination of global efforts to combat climate change. The chancellor’s pet project is an open and cooperative ‘climate club’ of ambitious countries, and the government aims to establish new partnerships on climate, energy and a just transition with emerging and developing countries.

The agenda is very full, and it is unclear whether the leaders are willing to make a step forward.

According to Bergamaschi, to make the summit a success, the members of the climate club must make tangible commitments, for example on industry decarbonisation. In addition, the G7 should agree an end date for coal power and be willing to update their climate targets in line with the 1.5°C target. They must also avoid expanding gas infrastructure domestically and abroad and make new pledges on finance, for example on loss and damage, Bergamaschi says.

However, it is uncertain whether the G7 will agree anything substantial. “The agenda is very full, and it is unclear whether the leaders are willing to make a step forward compared to the climate ministers,” he says.

One month prior to the leaders’ summit, G7 climate and energy ministers had committed to making their electricity systems “predominantly” carbon-free by 2035, but stopped short of setting a specific date for exiting coal. With a much broader agenda now, big steps on these issues are less likely.

The climate club is easily the most prominent of Germany’s G7 climate initiatives. Scholz pushed the idea already when he was still finance minister under former chancellor Angela Merkel.

Germany had initially said it wanted a climate club to agree uniform standards for the emission and pricing of CO2 – possibly even assigning a uniform price on emissions in the medium term.

Marian Feist, researcher at the German Institute for International and Security Affairs (SWP), sees several issues with the original climate club proposal. Many observers “struggled to identify the essence of the initiative,” an issue that is not quite resolved, he says, pointing to rather vague formulations in the recent communiqué of climate and energy ministers. “It’s hard to tell even within the G7 how much support there is for individual aspects of the initiative.”

Secondly, the original ambition of the German G7 presidency was high. “For some elements of the original climate club proposal you could be quite certain that they do not align with the interest of all G7 members, in particular comparable carbon pricing systems.” The U.S. and Japan are unlikely to introduce broad nationwide carbon prices any time soon, Feist says.

Lastly, the climate club runs the risk of becoming a “rich countries‘ club,” so the G7 must send the right signals to developing countries that the club takes their key concerns seriously, he says.

To make the summit a success, the leaders would have to set up a climate club that maintains a high level of ambition but is politically feasible. “Looking at all the other alliances and partnerships that exist to try and compensate the lack of enforcement mechanisms in the Paris Agreement, there is a danger that this is going to be yet another initiative that is going to fizzle out at some point.”

Planned partnerships must not be “empty boxes”

Germany has announced its aim to make cooperation with emerging and developing countries another key focus of its G7 presidency – with climate, energy and development partnerships as tangible outcomes. At the summit, “we want to start concrete initiatives and partnerships for climate and sustainable investments,” Scholz said during a recent visit to South Africa.

The country made headlines at the UN climate conference in Glasgow last year. The U.S., the UK, France, Germany and the European Union joined together in a first-of-its-kind partnership to help South Africa accelerate its move away from coal with 8.5 billion U.S. dollars. The deal is seen as a blueprint for Germany’s G7 presidency.

“We know that some countries are under evaluation, including India, Indonesia, Vietnam and Senegal,” ECCO’s Bergamaschi says. “We will see whether a partnership will be announced at the summit or at a later stage.”

India’s Economic Times reported a proposal for a partnership to help fund and support the country’s transition from a “fossil-based economy to a carbon neutral economy,” which could be announced at the summit. India’s government was still evaluating the proposal at the time of reporting.

Bergamaschi says it might be better not to rush things, as Germany remains G& president until the end of the year. The biggest risk is to make announcements that later turn out to be “empty boxes that damage the credibility of the G7. So, it might be better to wait and come up with real pledges.”

After failing to set an end date for coal at the ministerial level, it seems unlikely that the leaders would be more ambitious.

The Financial Times has reported that the German government pushed for a 2030 phase-out date but run into resistance from the U.S. and Japan.

Analyst Bergamaschi calls on the G7 members to live up to their responsibility and consider what an exit date could communicate to the rest of the world. “It is critical globally to send a signal in particular to China and India that the G7 are moving fast towards a coal phase-out,” he says. “Otherwise, the G7 risks losing credibility vis-à-vis those countries.”

This is crucial since the G7 summit is an important stepping stone towards the G20 summit in Indonesia and the UN climate change conference COP27 in Egypt later this year.

“It will be crucial for the G7 countries to create the right momentum for the COP, but also give the right signals of inclusivity and openness on the club idea to indicate that they take their obligations of climate finance seriously and are thinking about the concerns of developing countries in terms of loss and damage,” researcher Feist says.

After the climate ministers’ meeting in Berlin in May, Germany’s Robert Habeck expressed hope that the impetus of the meeting could be transferred to the G20. “We are obliged to do everything in our power to make the G20 a success,” he said.

The new German government has put climate change “front and centre in all things foreign policy,” SWP’s Feist says. Placing climate negotiations in the hands of the foreign office and introducing former Greenpeace head Jennifer Morgan as climate envoy certainly mean that Germany’s standing on climate among the G7 is strong.

Accordingly, the government can hardly afford to come away empty-handed. In the end, however, much of the summit’s success could come down to one person – Scholz.

The chancellor has come under a lot of criticism during his first months in office, not least for his botched communication on Ukraine, where he “struggled to explain his foreign policy goals to allies and citizens,” as Politico put it.

On climate, Scholz now must show leadership, Bergamaschi says. “So far, we have seen a rather shy and unambitious chancellery, but now is the first opportunity for him to really define what climate leadership looks like,” he says. “This cannot be just the climate club.”