Germany’s federal government, the states, and its municipalities have agreed on a fund worth one billion euros to invest in measures to prevent a looming driving ban in many of the country’s inner cities, the government says in a press release. Representatives of over 30 municipalities with high levels of air pollution met with Chancellor Angela Merkel to discuss how a ban, which could be issued by a court in February, can still be avoided. “We’re running out of time,” Merkel said, announcing that an ad-hoc programme will make funds available “as off tomorrow”. The money will be used on the electrification of vehicles such as public buses and digitalisation measures in traffic management systems in communities with high nitrogen oxide emissions, a paper by the chancellery states. The Chancellor reiterated after the summit that it was in the “highest interest” to avoid diesel car driving bans in German cities.

The latest diesel summit of Germany’s federal government and representatives of municipalities with high levels of air pollution has been a “failure”, Jürgen Resch, head of organisation Environmental Action Germany (DUH), said in a press release. None of the measures presented are adequate to substantially bring down levels of nitrogen dioxide (NO2) pollution in affected cities before a possible driving ban could take effect, the DUH said. The summit resulted in neither a pledge by carmakers to mechanically retrofit nine million manipulated diesel cars, nor did it make progress on a so-called “blue badge” solution needed to identify vehicles that abide by emissions standards. Chancellor Angela Merkel “submits” to the carmakers and continues to appeal to voluntary measures instead of threatening the companies with huge fines, Resch said.

Michael Ebling, mayor of the city of Mainz and head of the Association of Local Municipalities (VKU), said that federal financial support to enable German cities to reduce air pollution had to continue after 2018. “The elephant in the room” - the car industry - had to present alternative engines more quickly, Ebling said in a statement. The carmakers either had to do so voluntarily or policymakers had to come up with binding legislation, he added.

Gerd Lottsiepen, of environmental organisation Verkehrsclub Deutschland (VCD), said the summit fell short of being “the necessary beginning of a transition in the transport sector”. Digitalisation measures, if anything, would only improve air quality in the medium-to-long term, and the underlying factors of high NO2 levels had not been tackled, Lottsiepen said. Manipulated cars had to be retrofitted by the carmakers and new registrations of cars with excessive emissions limits needed to stop, he argued.

See the CLEW factsheet The debate over and end to combustion engines in Germany for more information.

Industrial conglomerate Siemens has formed a partnership with plane maker Airbus and turbine engine supplier Rolls Royce to test a hybrid-electric propulsion system for commercial aircraft. The “E-Fan X” technology demonstrator, which is based on an existing 100-seater model, is anticipated to fly in 2020 with one of the aircraft’s four gas turbine engines replaced by a two megawatt electric motor, according to a press release. The companies said lowering carbon emissions is “among the top challenges for today’s aviation sector”.

Find a Reuters article on the subject in English here. 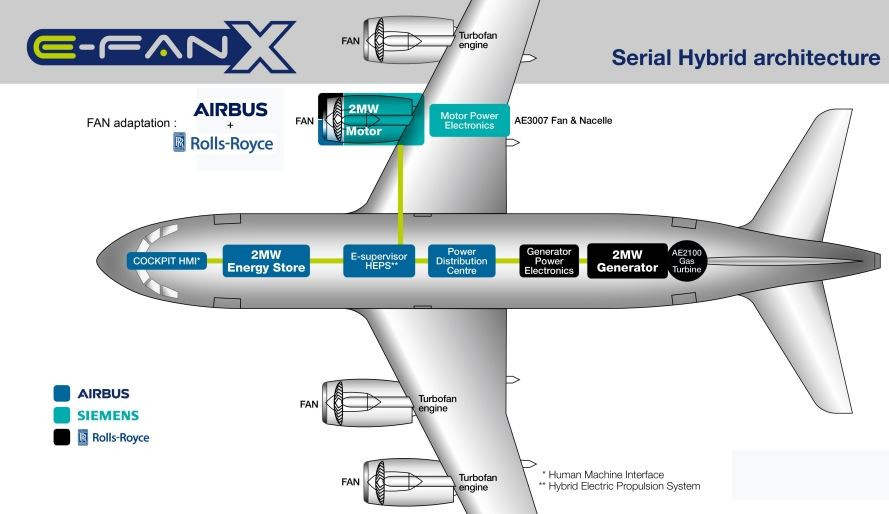 Germany’s last lignite-fired power plant will go off-line by 2040, the Social Democratic energy politician Bernd Westphal said at an event of innogy, the renewables spin-off of utility RWE, which owns many of the country’s lignite plants. But the move towards a climate-friendly economy should not be reduced to a coal exit, said Westphal, who has been among the first in his party to call for discussions about a renewal of the coalition with Chancellor Angela Merkel’s conservative CDU after her talks with Greens and pro-business FDP had collapsed. The question of the speed and starting point of a coal exit has been one of the most controversial issues during the coalition talks. Westphal said a new model to finance the energy transition was necessary in order to bring all sectors – power, transport and heating – together in so-called sector coupling. “With the Renewables Energy Act alone, we won’t achieve that,” the SPD politician said. Some form of a carbon price to create a level playing field for all forms of energy could be a solution. However, Westphal warned against moving too fast. “We should not overdo it otherwise we drive industry abroad.” Westphal also voiced doubts that e-mobility was the panacea in transport. The country should remain open to other technologies and factor in leaps in innovation. Speaking at the same event, innogy CEO Peter Terium urged the government to speed up the move to renewables, which were cheap now and should not be punished for rising costs in the first phase of the energy transition. Terium also stressed that investment in local and regional distribution grids were far more important for a decentralized and increasingly digital electricity system than the construction of the much-contested transmission power lines.

Find background on the Social Democrats’ election programme here and an overview of other party’s energy and climate priorities in a factsheet.

Get background on Westphal’s view from the pre-election interview. Find the options considered to finance renewables in a factsheet. The dossier connecting up the Energiewende provides details of the debate about power grids.

Swedish Utility Vattenfall has made “one of the single biggest investments in renewables” in its history by ordering 113 modern 8 megawatt (MW) offshore wind turbines from Spanish-German manufacturer Siemens-Gamesa, Vattenfall says in a press release. The turbines, with a total capacity of 950 MW, will be used for three different projects in the North Sea and the Baltic Sea. Gunnar Groebler, head of Vattenfall’s wind power branch, says lumping the three projects together in one tender had helped to reduce costs. “This shows once more how quickly and flexibly offshore technology develops,” Groebler says.

See the CLEW dossier The Energiewende and Efficiency for background.

The parameters for efficiency rules suggested by the industry and energy committee in the European Parliament are too rigid, says German industry association BDI. Industry needed a flexible legal framework that helps to combine energy efficiency and economic growth, said deputy chief executive Holger Lösch in a press release. When it comes to efficiency, incentives, information and support had been the most successful instruments, not “micro management by the state”, Lösch said.

See the CLEW dossier The Energiewende and Efficiency for background.

The Higher Administrative Court in Münster has put a temporary stop to the clearing of the Hambacher forest in North-Rhine Westphalia where energy company RWE wants to extend a lignite mine, Marlon Gego reports in the Aachener Zeitung. Friends of the Earth Germany (BUND) had submitted an emergency appeal to stop the forest from being cleared, although a court in Cologne had given RWE permission to expand the mine. Anti-brown coal activists are living in tree houses in the forest and have vowed to fight any eviction. The clearing ban is in place until the court in Münster has reached its decision.

See the CLEW factsheet Coal in Germany for more information.

Storing heat underground offers the possibility to replace fossil-powered heating plants, according to a press release by Kiel University on this week’s national symposium on the technology. The potential for underground storage should be used to solve the problem of acceptance, said Green energy minister Robert Habeck, from the federal state of Schleswig-Holstein. The government supports the corresponding research with 6.6 million euros until 2020.

Deutsche Post DHL plans to equip 500 of its electric delivery vans Streetscoter with fuel cells to test the technology on the road shortly, electrive.net author Daniel Bönninghausen has learned. The logistics giant has already achieved its target to operate 5,000 of its self-made e-vans before the end of the year, reports Bönninghausen. The vehicles have driven 13.5 million kilometres and saved 16,000 tons of CO2, according to Deutsche Post.

Read the article in German here and an English version on electrive.com here. 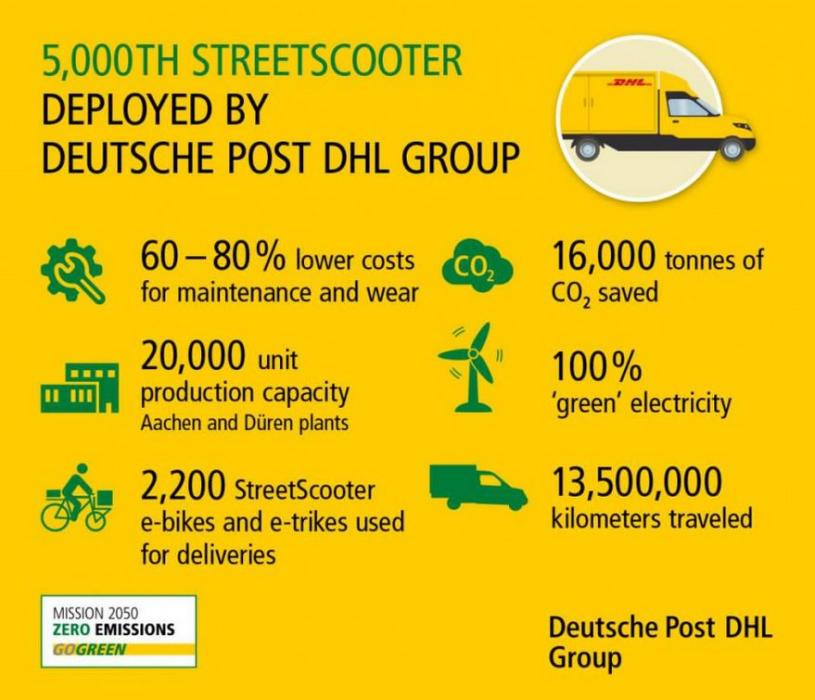