The federal economy ministry (BMWi) plans to phase out support for heating systems that run entirely on fossil fuels by 2020, as part of its new “Energy efficiency and heat from renewable energies” strategy. Industry opposition to the plans is inevitable, Dana Heide writes for Handelsblatt. The government aims to “clean up the current parallel, and sometimes muddled” support for energy efficiency measures in buildings, Heide says. In a press release, state secretary Rainer Baake said the plans “implemented an important measure of Germany’s Climate Action Plan 2050”. But it remains to be seen if the strategy will be carried through by a new government after the federal elections in September, the article says.

The German Industry Initiative for Energy Efficiency (DENEFF) has welcomed the government’s new “Energy efficiency and heat from renewable energies,” strategy, saying that measures to pool support schemes are long overdue. In a statement, DENEFF called for better coordination of support for renewable power and energy efficiency measures.

Three days before parliamentary elections in Germany’s most populous state of North Rhine-Westphalia (NRW), Chancellor Angela Merkel’s conservative CDU party has taken the lead in polls, ahead of the governing SPD, national TV station ZDF reports. The CDU now polls at 32 percent; the SPD at 31 percent. The current SPD-Green coalition will not be able to continue if the election result matches the poll. The Greens have fallen to 6.5 percent, having taken 11.3 percent at the last election in 2012. The Free Democrats (FDP) have seen a resurgence compared to their 8.6 percent result in 2012, and are now polling at 13.5 percent, meaning the economic liberals could become the third party in the state. The election takes place on May 14 and is seen as a key predictor for the federal elections in September.

See the CLEW article Coal exit: elephant in the room at vote in German industry heartland for background. 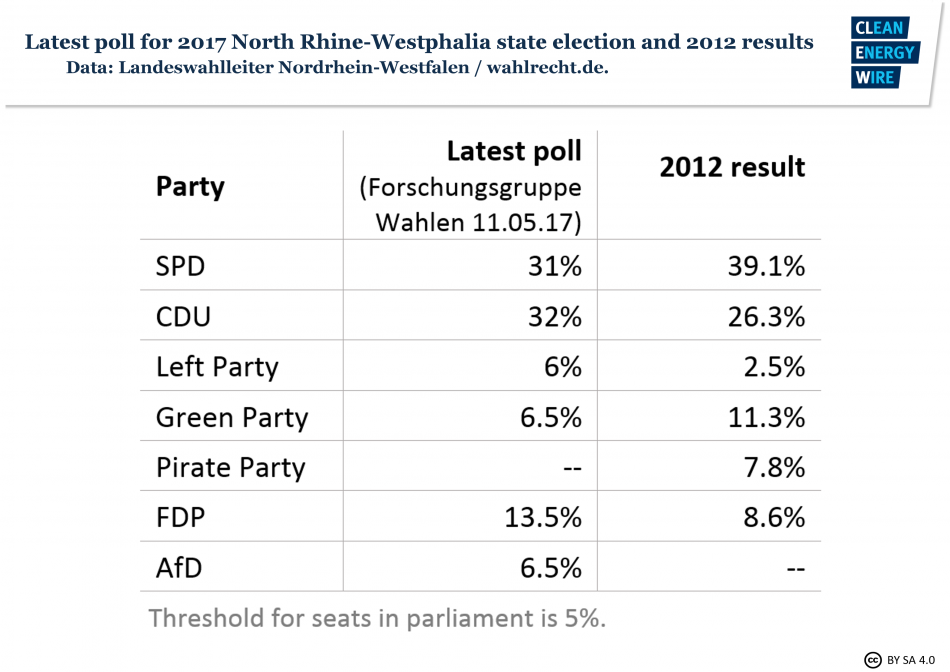 “Probably the greatest malfunction in the red-green coalition”

North Rhine-Westphalia’s (NRW) Green environment minister Johannes Remmel has angered the party's SPD coalition partners, as well as the CDU, with a call to close 10 local coal-fired power plants, Guido M. Hartmann writes on Welt Online. Just days before parliamentary elections in Germany’s most populous federal state on 14 May, Remmel’s plea has caused “a collective outcry” in NRW, whose heavy industry relies on the region’s vast lignite reserves for cheap power, Hartmann says. The SPD, the “red” force in the "red-green" coalition, confirmed the state’s plan to continue coal mining and coal-fired power production until the middle of the century, he writes.

See the CLEW factsheet When will Germany finally ditch coal? for more information.

If the Social Democrats (SPD) lose their governing power after the upcoming vote in North Rhine-Westphalia (NRW), they may take a much stronger stance against plans to give up coal than they have in their current coalition with the Green Party, Claire Stam writes in an article for French responsible investment group novethic. A coal exit in NRW would have a huge impact on national energy policy, Stam says.

Find the article in French here.

See the CLEW article Coal exit: elephant in the room at vote in German industry heartland and the CLEW factsheet Facts on the German state elections in North Rhine-Westphalia for background.

A case study in combating bias

German utility RWE has overhauled its decision-making process, after the group underestimated the transition to green energy and lost much of the 10 billion euros it invested in conventional power generation in the second half of the last decade, the chief financial officer of RWE’s renewable spin-off innogy, Bernhard Günther, told McKinsey Quarterly. The group fell into the trap of thinking the energy world would continue as it had always been, Günther said. Among its biggest mistakes were managerial failures such as cost and time overruns on the investments. But the company also failed to take into account the political will to promote renewables, although this “was publicly known at the time our investment decisions were made”, Günther said.

Find background on the utilities’ struggle to survive in the Energiewende in the CLEW dossier.

In its 2017 first quarter results report, German renewables utility innogy warned that prospects in the British retail market had sharply deteriorated as a result of fierce competition, Reuters reports. Overall, the company posted an increase in earnings (EBITDA) of 4 percent year on year, at 1,617 million euros. The grid business, where adjusted earnings before interest and taxes (EBIT) increased by 29 percent to 708 million euros, was the main driver of earnings growth achieved in the first quarter 2017, while EBIT for the renewables division declined 13 percent year on year, as lower wind levels led to reduced electricity generation, innogy said in a press release.

The invsolvency of Germany’s last solar cell maker, SolarWorld, is a failure of the country’s support for renewables, Patrick Bernau writes in an opinion piece for Frankfurter Allgemeine Zeitung. He argues that the scheme distorted the market. “The solar industry has again demonstrated what happens when the government interferes too much in the energy transition – or any other area. It’s a lesson for those who decide on financial support for e-cars and building insulation,” Bernau writes.

“Save the world, a little bit”

Think tank Agora Energiewende* will present proposals to take better account of industry needs in the German energy transition, Angela Hennersdorf and Christian Schlesiger write in WirtschaftsWoche. In its "Charter for Energiewende Industrial Policy" to be presented next week, Agora argues that climate protection must be reconciled with industrial policy to provide planning security for businesses. Energy-intensive companies including Thyssenkrupp, Siemens and Wacker Chemie have collaborated on the paper. The country needs “a future pact between government and industry that defines the Energiewende as a common project,” said Agora's director, Patrick Graichen. Concrete proposals include adapting energy costs to conditions in competing international locations, reforming energy taxes and levies, and fixing Germany’s climate targets in an “Energiewende law” that would also guarantee competitive energy costs, WirtschaftsWoche reports.

For background read the CLEW dossier The energy transition's effect on jobs and business.