The German Green Party is calling for a cross-party commission to prepare the shift to emissions-free transportation akin to the commission that brokered Germany’s nuclear exit and the transition to renewable energy sources, Dresdner Neueste Nachrichten reports. Green frontrunner Cem Özdemir said former conservative CDU environment minister Klaus Töpfer was ready to head the body, dubbed the Future Commission for Environmentally Friendly Mobility, the newspaper says. The Secure Energy Supply ethics commission negotiated a societal consensus after the 2011 Fukushima nuclear disaster and laid out the principles of the Energiewende, it explains. Özdemir said the commission should be set up by the current government and provide ideas for a transport transition after September’s elections.

See a video on the Greens’ proposal on faz.net in German here.

Federal Ministry for the Environment

Germany’s federal government plans to present a joint list of demands to German carmakers at the national diesel summit on 2 August, a spokesperson for the environment ministry (BMUB) told journalists in Berlin on Monday. The inviting transport and environment ministries were in close consultation and the list was not yet finalised. At the first of several meetings to be held at the National Forum Diesel, the ministries and the companies were going to focus on software and hardware updates for Euro-5 and Euro-6 diesel cars  and would not “completely relive and re-discuss” all the events of the past months and years, he added. A spokesperson for Chancellor Angela Merkel said that while it was about “criticising what needed to be criticised”, this had to be done with the awareness that the auto industry was a “strategically important industry branch in Germany”.

For background, read the CLEW article Why the German diesel summit matters for climate and energy, and the timeline of Germany's car emissions fraud scandal.

Energy consumption in Germany increased 0.8 percent in the first half of 2017, compared to the same period in the previous year, due to positive economic development and slightly cooler weather at the beginning of the year, writes energy market research group AG Energiebilanzen (AGEB) in a press release. Renewables’ contribution rose by 6.4 percent, also due to increasing power production from wind (+ 19 percent), solar (+14 percent) and biomass (+ 5 percent). Nuclear energy consumption fell 17.5 percent, because of shutdowns for inspection. 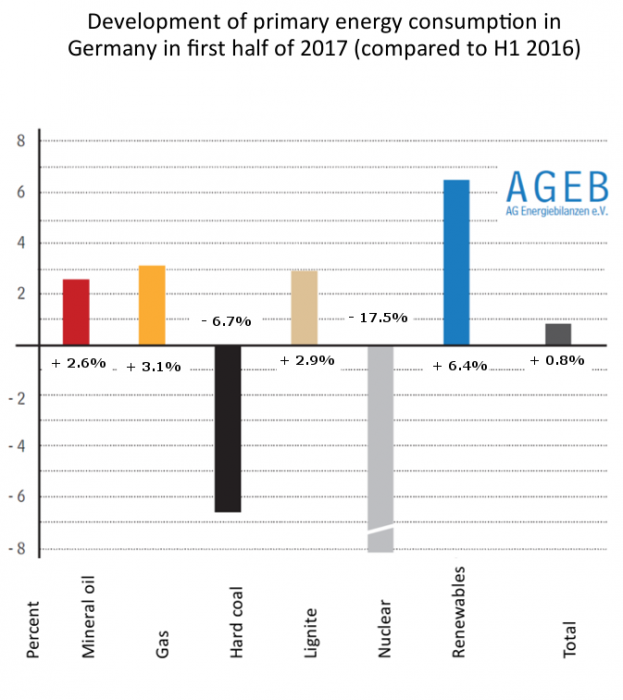 “Biggest worry of Germans ahead of elections is climate change”

More than two-thirds of Germans are most worried about climate change ahead of the general elections in September, according to a representative survey by Kantar Emnid commissioned by Westdeutsche Allgemeine Zeitung (WAZ). The “surprising result” showed that 71 percent of respondents said they worried about climate change, followed by 65 percent who worried about new wars and 63 percent about terror attacks, writes WAZ. Respondents were confronted with seven topics: climate change, new wars, terror attacks, criminality, old-age poverty, immigration and unemployment; multiple answers were allowed.

For background, read the CLEW dossier Vote2017 - German elections and the Energiewende.

“Get honest at last!”

The electric car will eventually take over as the dominant type of vehicle in Germany and this shift is going to cost the country jobs but clinging to the combustion engine would nonetheless be a big mistake, Christian Hochfeld, head of transportation think tank Agora Verkehrswende*, writes in a guest article for Zeit Online. Most political parties have by now reached consensus on Germany’s energy transition and the aims of the Paris Agreement for climate protection, but “without a transition in transport there won’t be an energy transition”, Hochfeld says. At the upcoming diesel summit, carmakers need to get honest and offer an actual retrofitting of cars equipped with emissions manipulation software, while politicians need to get honest and acknowledge that the combustion engine’s lifetime is finite, Hochfeld argues. “It’s not that all challenges posed by e-mobility have been overcome”, he concedes, “but the structural change in the car industry, which will topple its business model that has been optimised for 125 years, has long begun on the international stage”.

For background, see the CLEW article Why the German diesel summit matters for climate and energy and the CLEW interview with ICCT managing director Peter Mock.

*Like the Clean Energy Wire, Agora Verkehrswende is funded by Stiftung Mercator and the European Climate Foundation.

“How difficult grid expansion is going to be”

Placing Germany’s planned power transmission lines below ground will require a massive material and political effort, Andreas Macho writes in WirtschaftsWoche. The exact location of the two transmission lines SuedLink and SuedOstLink, which are supposed to transfer wind power over hundreds of kilometres from northern Germany to industrial centres in the south, has not even been decided, Macho says. “But the problems that companies will encounter when implementing this mega-project are beginning to show already”, he argues. Getting the cables that weigh up to 100 tonnes in remote areas of the country and into their trenches might even require “a revamp of the road network”, transmission grid operator Tennet told the paper. Construction will also drastically affect land owners’ property, which will require close involvement of citizens and also compensation payments “to appease protesters more quickly”, Macho says.

Germany’s parliament decided on allowing tenants to benefit from solar power panels installed on their buildings a few weeks ago and now renters seizing this opportunity say they were able to reduce their power bill with it, news agency dpa reports in an article carried by Mitteldeutsche Zeitung. “Tenant power” is especially profitable for people in eastern Germany, where grid fees are higher and solar panels allow people to decouple themselves from the grid to a certain extent, the article says. At a model project in the Thuringian town of Sondershausen, tenants were able to generate about a quarter of their electricity with their own solar panels, bring their power bill down and also save tons of greenhouse gas emissions, dpa reports.

German solar power business "back on a growth track"

Germany’s solar market is back on a growth track, with new solar PV installations accounting for a total capacity of 900 megawatts in the first half of 2017, writes the German Solar Industry Association (BSW) in a press release. This was an increase of 75 percent compared to the first half of 2016. Decreasing acquisition costs had prompted especially small and medium-sized companies as well as homeowners to install PV facilities, writes BSW.

“Millions for a new energy mix”

See the CLEW dossier The digitalisation of the Energiewende for background.

No coal exit with a conservative-liberal coalition after general elections

A German coal exit is unlikely to be introduced in the foreseeable future if a coalition of Christian Democrats (CDU), Christian Socialists (CSU) and Free Democrats (FDP) take over the federal government after the September elections, writes klimaretter.info in an article based on political party surveys by EUROSOLAR, the European Association for Renewable Energy. The CDU and CSU said a reduction of coal power was necessary for climate protection, but Germany would still need “baseload conventional power plants (also highly efficient gas plants) for some time”, as long as there weren’t enough competitive storages in combination with renewable energy. The FDP said that “a complete exit from coal-fired power generation is neither an imperative necessity to fulfil the Paris Agreement nor an end to itself.”

For background, read the CLEW dossier Vote2017 - German elections and the Energiewende.

Germany’s reset of its search for a final nuclear repository, with a new law approved in March 2017, is inhibiting the development of geothermal energy projects and is thus “blocking the way for the heating transition and climate protection”, writes Erwin Knapek, president of the German Geothermal Association (BVG), in a guest commentary on klimaretter.info. Hundreds of geothermal approval procedures are currently on hold because Germany is now a “blank map” when it comes to finding a final nuclear storage site. In addition, newly founded authorities – not yet fully up and running – had to be included in decisions on geothermal projects, writes Knapek.

For background, read the CLEW factsheet What to do with the nuclear waste – the storage question.