One tonne of CO2 emissions causes damages worth 180 euros

The environmental cost of the emission of one tonne of CO2 is about 180 euros, according to new calculations published by Germany’s Federal Environment Agency (UBA). Economic losses include crop losses, damages to buildings and infrastructure, and damages to human health, among others. “When annualised for Germany's greenhouse gas emissions in 2016, total costs amount to about 164 billion euros,” according to the UBA. The new report shows a significant increase over previous calculations – in 2014, the UBA said the damages amounted to 80 euros per tonne.
One kilowatt hour (kWh) of lignite-produced electricity causes an average 20.81 cents of environmental damage, according to the calculations. “Hence the total amount of lignite-produced electricity in Germany in 2016 generated 31.2 billion euros worth of environmental damage. In comparison, the environmental cost of one kWh of electricity produced with wind energy is only 0.28 eurocents,” the UBA said.

Environmental NGOs sandbag and Greenpeace have dubbed German utility RWE Europe's worst air polluter. “Four of the ten most toxic companies have their main coal plants in Germany: RWE, EPH, Uniper, and STEAG. This is no coincidence: Germany burns more coal than any other country in Europe and has done little to reduce air pollution from its coal plants in the last decade,” according to a press release. In response to the report, green groups urged Norway’s one trillion dollar fund to sell its small stake in RWE, according to a Reuters report.

Find the report in English here.

In the second joint renewables auction for solar power and onshore wind power in Germany, solar power bidders have secured the entire auctioned volume of 201 megawatts (MW) at an average support rate of 5.27 eurocents per kilowatt hour (kWh), the Federal Network Agency (BNetzA) says in a press release. “There was only one bid for onshore wind turbines, but it was above the support limit,” BNetzA head Jochen Homann said. According to the agency, “the entire auction effectively worked like an additional solar power tender.” The lowest support rate demanded was 4.65 ct/kWh and the highest 5.79 ct/kWh. The auction volume had been oversubscribed 1.5 times, the BNetzA said.
In a separate press release, solar power lobby group BSW Solar and wind power lobby group BWE called on the government to end the “artificial competition” between the two technologies. “The energy transition needs solar and wind power alike” and these should complement each other to provide the greatest benefit for the energy system, the renewable power groups said. The auction’s success was “no reason to celebrate” for the solar power industry because the awarded tender volumes would now be deducted from solar power auctions next year.

More than three-fifths of Germans believe that their government is not doing enough to limit the country’s impact on climate change, a survey commissioned by the solar power lobby group BSW Solar has found. In the survey, conducted by pollster YouGov, merely 21 percent of respondents said the government already does enough for climate protection, whereas 63 percent said it was not doing enough. “The public’s expectations for policymakers are clear: more climate protection,” commented BSW Solar head Carsten Körnig.

German battery maker VARTA has sealed a research agreement with the Fraunhofer Institute to lay the groundwork for the mass production of lithium-ion battery cells for electric cars as it seeks to take on Asian leaders in the sector, reports Ilona Wissenbach for Reuters. The German government has earmarked 1 billion euros to support domestic companies looking to produce battery cells for electric vehicles.

For background, read the article Chinese-German battery cell deal key step for mobility transition and the dossier Electricity storage is next feat for Germany’s energy transition.

Tesla CEO Elon Musk has floated the idea of working with Daimler on electric work vans after being guilt-tripped on Twitter for using fuel-burning vehicles to service its cars, report Gabrielle Coppola and Christoph Rauwald for Bloomberg. In response to a follower who wrote to him that Tesla needed an electric service vehicle rather than vans in use now that “burn fuel like crazy,” Musk vowed to inquire with Daimler AG about working together on an electric Sprinter van.

Find background in the dossier The Energiewende and German carmakers. 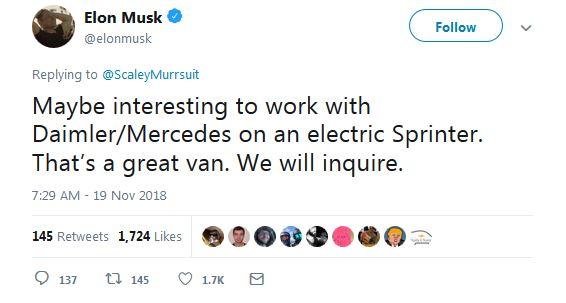 German industry has sharply criticised that support for thermal building insulation is not included in the environment ministry’s current budget. “By omitting this instrument, the government is negligent. If building renovations are not sped up, the 2030 climate targets for the building sector will be missed by almost 30 percent, or 20 million tonnes of CO2,” said Holger Lösch, deputy chief executive at the Federation of German Industries (BDI).