Power production from renewable sources in Germany hit a new record high on Easter Monday when renewable installations such as wind and solar PV generated 77 percent of net public electricity supply thanks to strong winds and abundant sunshine, according to research institute Fraunhofer ISE. [Updates with data from E.ON and BNetzA suggesting renewables covered more than Germany's power needs for several hours on Easter Monday.]

The institute’s Energy Charts project does not include data on the amount of power the generating facilities consume themselves to operate, or the power German industry produces and consumes without it being fed into the public grid. Fraunhofer ISE says their data represents the power mix that actually supplies German homes.

At around midday on Easter Monday, renewables covered almost all of Germany’s power needs, according to preliminary data from think tank Agora Energiewende.* Data by energy company E.ON even suggests that renewables covered more than the country's needs, as does data by provided by the Federal Network Agency (BNetzA) on the SMARD online platform.

Conventional power plants were throttled significantly at that time, but ISE’s Bruno Burger told PV Magazine generation from nuclear, gas and especially lignite could have been reduced still further. “That would have also kept wholesale prices from dropping so much,” Burger said.

Germany was not the only country with record news over Easter: The UK broke its record of continuous coal-free power generation, going more than 90 hours without coal over the weekend, the BBC reports.

Germany aims to cover 65 percent of its power demand by 2030 (37.8 percent in 2018). The exact share of renewables on any given day remains uncertain for some time – and may never be entirely confirmed – because precise data on power generation and consumption is published with several months’ delay. 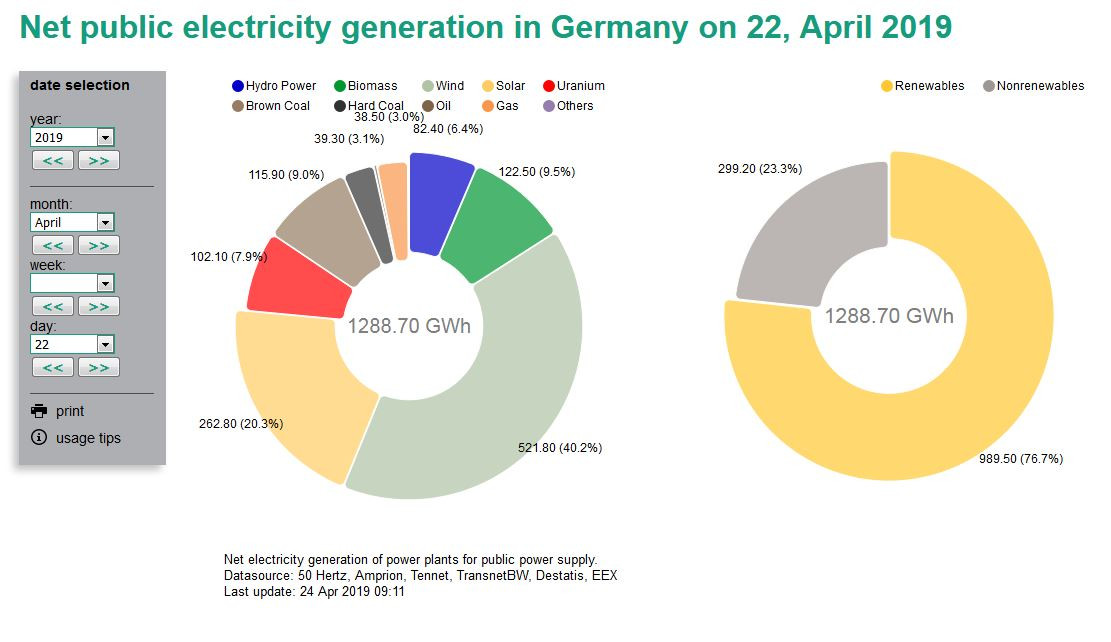 Wind produces over a third of Germany’s electricity in March, setting new record