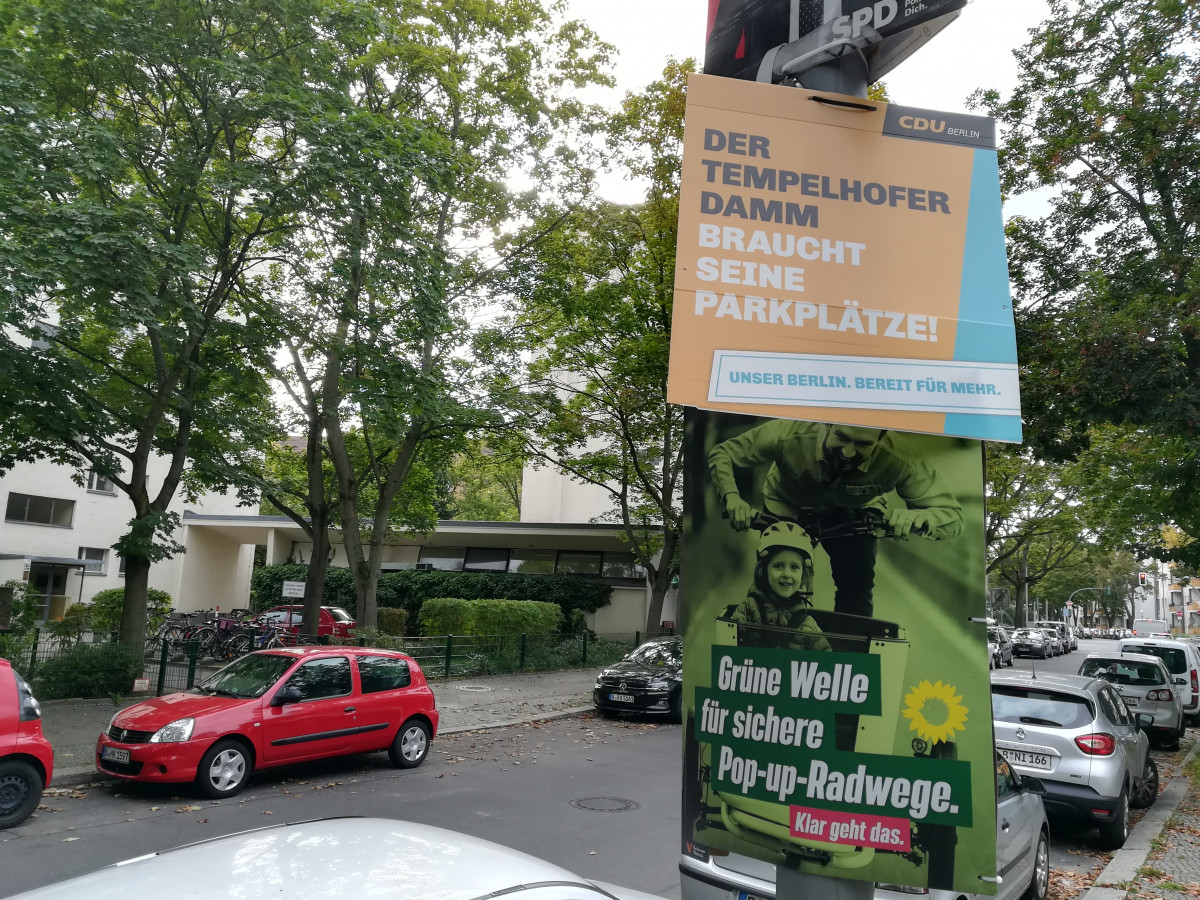 Mobility issues such as bicycle lanes and parking for cars feature strongly in the regional election in Germany's capital Berlin. Photo: CLEW/Wettengel.

Regional votes in two German states on 26 September are being overshadowed by the federal election on the same day. But the outcome in German capital Berlin and in the north-eastern state Mecklenburg-Western Pomerania will affect how the next German government’s energy transition policy is implemented – such as ramping up renewables. In both states, the Social Democrats have a good chance of winning – also at the national level. [UPDATE adds Berlin Greens' first-100-days climate programme]

One week before Germany’s federal election on 26 September, two regional campaigns – one in a key energy transition state – are taking place on the sidelines. People in the German capital Berlin and the eastern renewable energy state Mecklenburg-Western Pomerania will head to the polls to elect regional parliaments.

While climate change is a major issue in the national campaign, as people increasingly put it at the top of their policy priorities, regional voters are more  focussed on climate-related issues that affect them on the ground. The expansion of wind and solar parks or transport measures related to green mobility, for example, have been a bone of contention for political parties.

To meet its goal of climate neutrality by 2045, many experts and politicians say Germany needs to massively increase wind and solar power capacity. In the past, however, regional governments have not always supported this goal. States like Bavaria, for example, have set minimum distance rules between wind turbines and villages, which has limited available land. The big capital city Berlin has dragged its heels for years in enacting emissions reduction measures and incentives for renewable installations.

While the 2045 goal is backed up by major federal legislation like the Climate Action Law or the Renewable Energy Act, such state-level wrangling over key measures has consequences for the success of national policies. At the federal level, state governments also make up one of the two parliamentary chambers, the Bundesrat, where they wield considerable power. As the Green Party takes part in ten out of the 16 state governments, for example, it was able to exert political pressure in 2019 that led to the increase of the starting price of Germany’s CO2 price on transport and heating fuels.

The upcoming state elections will set the stage for how Berlin and Mecklenburg-Western Pomerania approach energy transition measures. Currently, the polls favour the incumbent Social Democrats (SPD) in both states. At the national level, the Social Democrats are also doing well – much to the concern of Conservatives (CDU/CSU), who under chancellor Angela Merkel have dominated German politics for the past 16 years.

Polls in Berlin show a close race similar to that at the national level – promising several options and lengthy negotiations for the next government coalition. The Social Democrats with mayoral candidate Franziska Giffey lead by a few percentage points. While the Green Party and the Left Party want to continue the current coalition with the SPD, Giffey has not committed to this. Differences over key policy areas could stand in the way. [Find out more about the party manifestos on climate and transport – in German]

The parties recently had a fierce climate policy dispute, after failing to agree a planned reform of the city’s mobility law in August. The Greens, who are running on ambitious transport transition demands such as a zero emission inner city zone by 2030, claimed the Social Democrats thwarted the plans because they didn’t want to alienate car owners ahead of the election.

Green Party lead candidate Bettina Jarasch on Monday (20 September) presented her climate emergency programme for the first 100 days in office should she become Berlin’s next mayor. She calls for state investments of several hundred million euros annually and wants to set up a climate cabinet, reported Tagesspiegel. 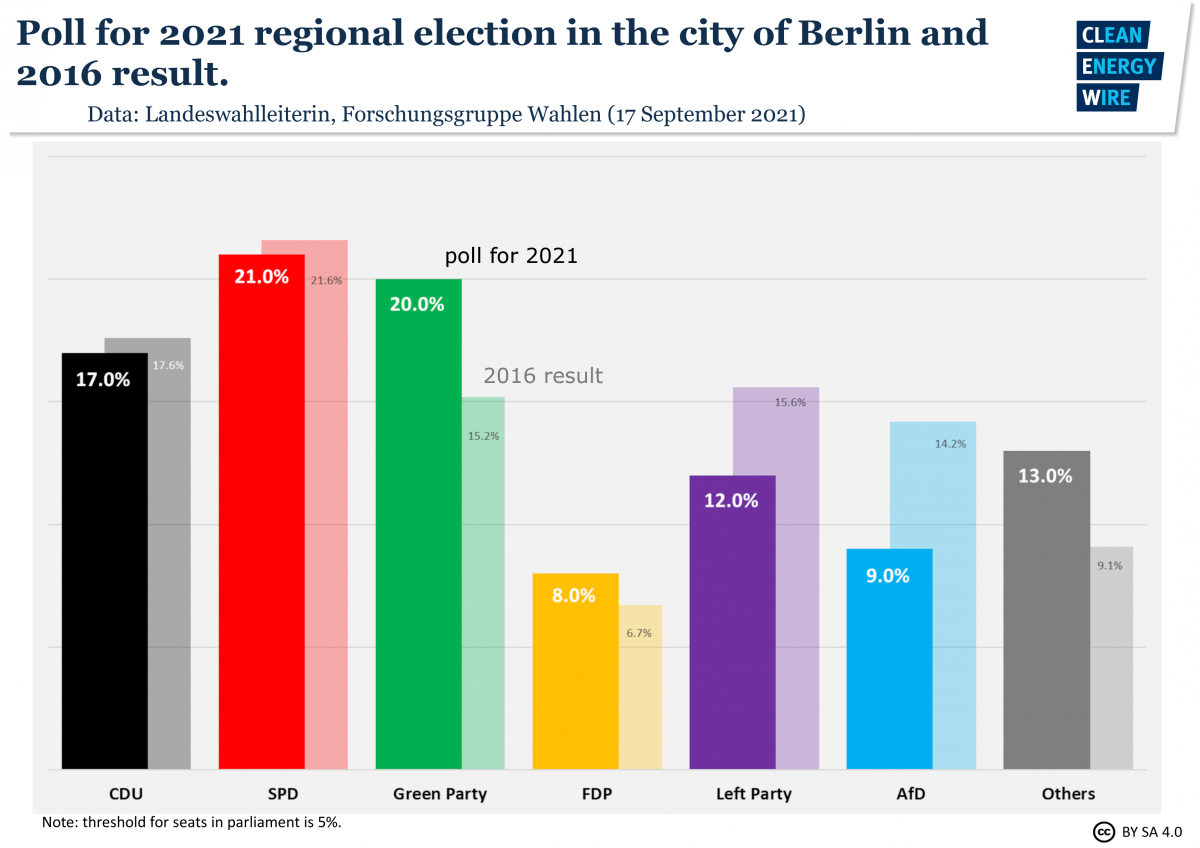 Berlin could be an important urban showcase for the Energiewende and a real-life laboratory for new climate-friendly transport and housing, but politics has often stood in the way. In recent months, however, the city did make some headway. The regional parliament agreed on more ambitious emissions reduction targets and passed a law making solar photovoltaic (PV) systems mandatory on residential and non-residential buildings in the city.

Topping the election agenda for Berliners is affordable and sufficient housing – also a thorny issue for the city’s current coalition. In a contentious referendum also held on 26 September, voters will decide whether the city can expropriate real estate from companies that own more than 3,000 apartments each. While the Left Party supports the referendum, the Social Democratic mayoral candidate Giffey opposes the idea and has ruled out coalition talks with a party that supports it.

The Social Democrats are set for a clear win in Mecklenburg-Western Pomerania, Germany’s most sparsely populated state, located at the Baltic Sea. For weeks, polls have shown an upward trend towards a solid lead with about 40 percent. SPD leading candidate and current state premier Manuela Schwesig is widely popular among the region’s voters.

The SPD has led governing coalitions in the state continuously since 1998 and formed alliances with the conservative CDU for the past 15 years. A majority of those eligible to vote (43%) favour a continuation of the current set-up, according to a recent poll by infratest dimap.

Even though the blustery northern state is a major supplier of wind energy, energy and climate issues are not dominating the campaign agenda. Environment and climate ranked 7th (10%) among respondents’ top issues in the infratest dimap poll. Education was first (25%), followed by unemployment (17%) and mobility (15%).

Mecklenburg-Western Pomerania is a key energy transition state which already produces more than 70 percent of its electricity from renewable sources. Situated at the Baltic Sea, wind power plays a major role. 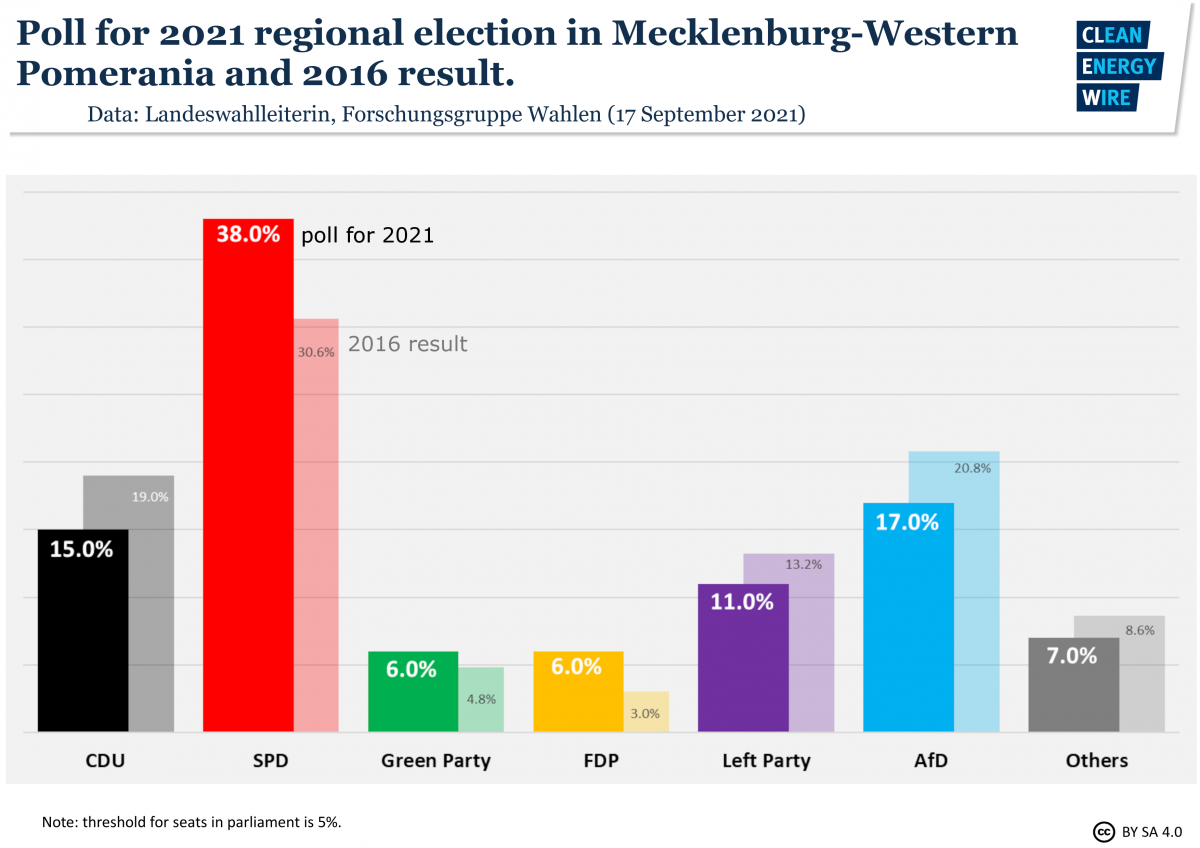 The roll-out of wind energy is an issue where party manifestos diverge, political scientist Jan Müller of the University of Rostock told public broadcaster ZDF. While the far-right AfD opposes wind power, the CDU calls for “moderate” expansion, and the Greens want 2 percent of the state’s land to be used for wind parks. The SPD supports expansion but says “we want absolutely to avoid the encirclement of entire villages by wind farms” – taking into account opposition to wind power expansion by parts of the population.

At the last election in 2016, then newly-founded anti-wind power party Free Horizon (FREiER HORIZONT) had tried hard to make wind power a major topic. It received 0.8 percent of the vote – not crossing the 5-percent-threshold to enter parliament – and runs again this year.

Meanwhile, one of the currently most contentious energy projects in the world that involves Mecklenbrug-Western Pomerania as a key location plays little role in the regional campaign: the Russian-German natural gas pipeline Nord Stream 2, which makes landfall at the state’s Baltic Sea coast. Most parties support the project, including the SPD and its leader Schwesig.

Schwesig has said that the fossil fuel natural gas is needed as a bridging technology until enough renewable energy is available. Earlier this year her government lobbied strongly in favour of completing Nord Stream 2, and set up a “climate” foundation in an effort to circumvent the threat of U.S. sanctions over the pipeline. Environmentalists criticised her and said the move would fuel the climate crisis.

Nord Stream 2 could bring cheaper gas to Germany, but its necessity for supply security is highly contested. Germany and Europe’s fossil gas needs are projected to decline over the coming decade, while the share of renewables is expected to rise. Germany also already has ample import capacity through its well-connected network in the heart of Europe.

In a recent televised debate by public broadcaster NDR, Schwesig commented: “I am very happy that the Baltic Sea pipeline Nord Stream 2 is now finalised. Our state has always pushed for this, even when things were turbulent.”

CLEW election follow-up after the vote – what happens next?

German federalism: In 16 states of mind over the Energiewende