Factsheet
On 24 September, more than 60 million Germans are invited to head to the polls to choose from 4,828 candidates, elect the next federal parliament and thus decide the next government. The Clean Energy Wire has compiled contacts, links and an explanation of the voting system to help journalists report on Germany’s 2017 federal elections. [Update adds FiveThirtyEight link]

1. How do Germans elect a new government?

German voters does not directly elect the next chancellor or cabinet. Every four years, German citizens over the age of 18 get to elect members of the federal parliament, the Bundestag. Voting is not obligatory and elections are secret.

Germany uses a mixed-member, or personalised proportional representation system with an elaborate method to determine the total number of seats. Federal election law currently sets the number of seats in the Bundestag at 598, but additional seats result from special provisions.

Voters have two different votes on their ballots, each determining roughly half of the seats in the Bundestag. 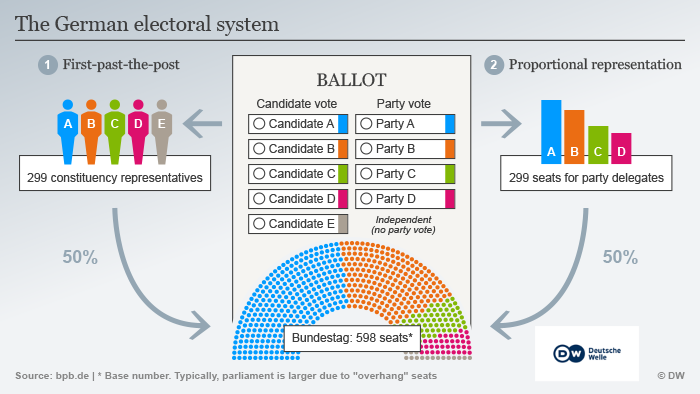 The “second vote” can be seen as more important, as it decides what share of the 598 seats each party receives. Here, the voter chooses a party, not an individual candidate. Based on the proportion of votes, the 598 mandates are, in principle, divided between those parties that received at least 5 percent of the vote. This clause is meant to prevent parliamentary fragmentation. Each party has a federal state candidate list and seats are allocated based on order of appearance of the list.

This system normally leads to additional seats being created, for example when a party wins more “first vote” direct seats than granted by “second vote” proportion, which are called “overhang seats”.

To form a government, a party – or a coalition of parties – principally needs the majority of seats. As one of their first official acts at the beginning of each new legislature, the Bundestag elects the chancellor from among the represented parties’ “Spitzenkandidaten,” the top candidates, or candidates for chancellor. The chancellor must win an absolute majority to then form a government and decide on his or her cabinet.

A party’s Spitzenkandidat may also be the party leader, or chair, but these are separate roles and may be held by different people. Some parties have joint chairs, and/or joint Spitzenkandidaten.

2. Parties likely to pass the 5-percent threshold to enter parliament

For a condensed overview on the parties, also visit the Jeremy Cliffe’s blog on the Economist: “Germany’s election: a primer”.

The conservative, centre-right Christian Democratic Union (CDU) is one of Germany's two main parties and led by current Chancellor, party chair and Spitzenkandidat Angela Merkel. Together with its sister party the Christian Social Union (CSU) – which only operates in the federal state of Bavaria – the CDU forms the CDU/CSU “Union”. They have a joint parliamentary group in the German Bundestag and a joint election programme. Merkel and her party have been in power since 2005, having led different coalition governments.

The Christian Social Union in Bavaria (CSU) is a conservative political party that only operates in the state of Bavaria. Together with its sister party the Christian Democratic Union (CDU) - which operates in the remaining 15 federal states – the CDU/CSU, also known as the “Union” form a joint parliamentary group in the German Bundestag. The CSU is led by Bavarian state premier Horst Seehofer. The CSU’s Spitzenkandidat is Joachim Herrmann.

The Social Democratic Party (SPD) is currently the CDU/CSU’s junior partner in the government's ruling "grand coalition". Its party chair is former President of the European Parliament Martin Schulz. Merkel’s main rival for the chancellery brought his party a surge in the polls after he was presented as the SPD’s Spitzenkandidat in January, but numbers have since returned to pre-Schulz levels, and the SPD lost several important state elections.

The Free Democratic Party – led by Spitzenkandidat Christian Lindner – is Germany's liberal, market-oriented party. Although the party failed to enter federal parliament in 2013 for the first time in post-war history, it has regained political momentum through successes in some states (e.g. North Rhine-Westphalia). The FDP has spent more time – 52 years – participating in governments of the Federal Republic of Germany than any other party.

The centre-left Green Party grew out of the environmental, peace and anti-nuclear movements in the 1970s and 1980s, as well as GDR citizens’ movements. From 1998 until 2005, it was the junior partner in a government coalition under Social Democratic Chancellor Gerhard Schröder – the Greens’ only period of participation in federal government. The Greens have extensive power in the states – where they are part of 10 of Germany’s 16 state governments – and therefore in the German Bundesrat, or council of state governments. The Greens’ Spitzenkandidaten in the election are Katrin Göring-Eckardt and Cem Özdemir. The party is led by joint chairs Özdemir and Simone Peter.

The Left Party is currently part of the opposition in the German federal parliament. It is the country’s most left-wing party and was founded in 2007 from the successor party to the GDR’s Socialist Unity Party together with the SPD carve-out WASG. Hardliner positions on issues such as foreign and security policy make it unlikely that the party will be part of a government coalition. The party chairs are Katja Kipping and Bernd Riexinger, while the party Spitzenkandidaten team consists of Sarah Wagenknecht and Dietmar Bartsch.

Germany’s youngest major party, the right-wing Alternative for Germany (AfD), founded in 2013, was originally based mainly on anti-eurozone policies and narrowly missed the 5-percent threshold to enter parliament in 2013. In the following years, the party has shifted further to the right, focusing on issues such as migration and Islam. All other major parties have ruled out forming a coalition with the AfD. The party is led by joints chairs Frauke Petry and Jörg Meuthen. Its Spitzenkandidaten are Alice Weidel and Alexander Gauland.

Bundeswahlleiter.de
You can find the latest official information on the elections on the English version of the website of the Federal Returning Officer, including the number of candidates (4,828 – of which 1,400 are women), and a map of all constituencies. The site also offers an election glossary, explaining terms like overhang mandates and Sainte-Laguë/Schepers, and proportional representation. After the elections, the website will present the official results.

Wahlrecht.de
A group of students established Wahlrecht.de as an independent, non-party, non-commercial website on election topics, electoral systems, the right to vote and opinion polls for federal and state elections. Parts of the site are in English, but most information is available only in German. Here you can find a list of the latest poll results by Germany’s large polling agencies and here Wahlrecht.de’s Twitter feed.

Twitter
The most common hashtags for the German federal elections are #BTW17, #Bundestagswahl, #GermanyDecides. For a foreign journalist’s perspective you can follow The Economist’s Berlin Bureau Chief @JeremyCliffe.

Bloomberg’s coalition guide
Bloomberg has A Guide to Germany’s Possible Coalitions explaining the different possible coalitions for the new government, and their likelihood. It is updated regularly with new polls.

Check out wahlrecht.de for a compilation of the latest polls.

Journalists can apply for accreditation with the idw scientific information service, a news portal for up-to-date information from the latest research. idw offers an expert list for the 2017 general elections, made up of scholars with expertise in election campaigns, political party history, election law, certain campaign topics and more.

Here’s a selection of political analysts that frequently comment on the general elections:

Further CLEW material on the elections and the German political system: