Renewables Solar Renewable Energy Act | EEG 2016
The average price of new solar power installations in Germany has fallen below five cents per kilowatt hour for the first time ever. Since the introduction of auctions in 2015, prices for the technology have declined by more than 40 percent, prompting calls from the solar industry to remove all caps on its expansion. The issue is likely to become a bone of contention in upcoming coalition talks for Germany's new government, which are scheduled to start this week. [Updates graphic on cost development]

The cost of power generated by new solar PV installations in Germany dropped to a new record low in the third round of auctions in 2017, with average support falling below five euro cents per kilowatt hour (ct/kWh) for the first time ever. According to the Federal Network Agency (BNetzA), costs fell to 4.91 ct/kWh from 5.66 ct/kWh in June. BNetzA head Jochen Homann commented that “especially larger installations apparently benefit from economies of scale and can be built at relatively low prices”.

In the auction with a final tendered volume of 222 megawatt (MW), the lowest accepted bid was 4.29 ct/kWh, and the highest 5.06 ct/kWh, the agency said.

At the first pilot auctions in 2015, the average costs for solar power installations still stood at 9.17 ct/kWh, and fell by more than 40 percent since auctions were introduced. In light of the substantial drop in support rates, the German Solar Industry Association (BSW) has called for removing the caps on the technology’s expansion.

“If the government wants to achieve its climate goals, it urgently has to increase the expansion goals for photovoltaic installations”, said BSW head Carsten Körnig. Germany could “no longer afford to not use the bulk of its annual sun harvest”, Körnig said. The new price level necessitated a much more “dynamic expansion” of solar power, he added.

The expansion of solar power installations is currently capped at 2.5 gigawatt (GW) per year, which according to the solar power lobby group is due to the previously higher price levels of the technology. Power produced in large photovoltaic installations is now cheaper than that generated by new fossil power plants, eliminating any reason to limit solar power expansion, the BSW said.

Germany currently has installed solar power capacity of about 42 GW. This covers around seven percent of its electricity demand. The country would need an estimated 300 GW for its Energiewende, the dual shift from nuclear and fossil power to renewable energy sources, the BSW argued.

Since solar power plants can be built relatively quickly and get high approval from citizens, it would be “ecologically and economically unexplainable” if the technology’s potential was not fully exploited, Körnig said. A swift expansion of solar power to replace carbon-intensive fossil power plants could even help Germany to still reach its endangered 2020 emissions reduction targets, he added. 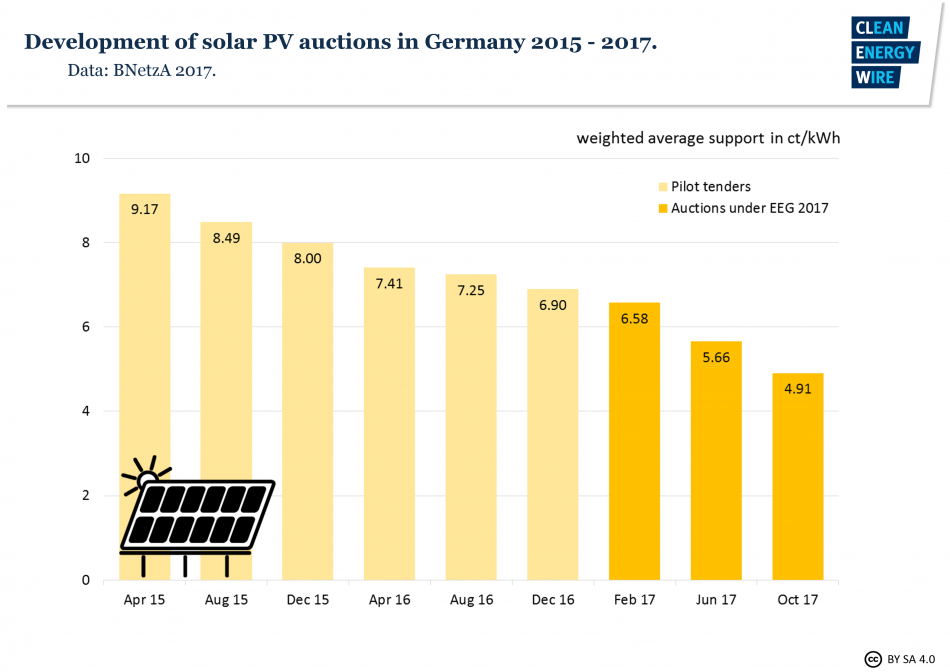 The expansion of renewable energy sources is likely to figure prominently in the upcoming coalition talks to form a new German federal government, which are scheduled to start on 18 October. The members of a so-called Jamaica coalition of Chancellor Angela Merkel’s conservative CDU/CSU alliance, the pro-business FDP, and the environmentalist Green Party are bound to clash over climate and energy policy issues, such as the rapid phase-out of coal-fired power production, demanded by the Greens, or the lifting of the cap on renewables, which was introduced by the previous government that included the conservatives.

The fall in the cost of solar and wind power installations, as well as of biogas plants, has led renewable energy advocates to call for abandoning all restrictions on renewables expansion, which opponents argue is still too costly. The operators of solar power installations receive about one third of support payments made under Germany’s Renewable Energy Act (EEG).