Conventional power stations, like hard coal, gas-fired or nuclear plants, are forced to curb generation because of the heat wave hitting Germany. While the stability of the power system as such is not in peril and most renewables are stepping into the breach, brown coal-fired plants could turn out to be the least affected.

As Germany is experiencing an extended heat wave and drought, with temperatures rising up to 40 degrees Celsius, some of the country’s conventional power stations are struggling to keep operations running.

The Grohnde and Brokdorf nuclear power plants in northern Germany have had to reduce their electricity production because cooling water temperatures were slightly too high.

The utility Energie Baden-Württemberg AG (EnBW) had to shut down a hard coal-fired power plant in Karlsruhe because of increased water temperatures. If rivers from which most power stations draw their cooling water heat up to more than 28°C, power stations are not permitted to empty warm water back into the river so as to not heat it up even more. Environmental organisations are keen to uphold this rule as they fear a mass death of fish if the water got any warmer,but power station operators have received temporary exemptions to enable them to keep their plants running even if water temperatures cross the 28°C threshold.

Another utility, RWE, has a specific problem with its hard coal-fired plant in Westphalia: because of the low water levels in the river Rhine, fuel deliveries via the river have been obstructed. “The ships carry less coal than normally, so the plant operators have to calculate very carefully when it can be operated in accordance with market prices and demand,” RWE spokesperson Guido Steffen told the Clean Energy Wire.

Gas-fired power stations are also affected by the heat as they require cooling like other thermal plants, Steffen said. Two RWE gas turbine power stations in Dormagen and Lingen have been temporarily reducing their generation.

However, Georg Oppermann, spokesperson for energy company Uniper, told the Clean Energy Wire that the high price for natural gas and low power consumption levels during the summer holidays meant that most gas-fired plants weren’t running anyway. “We are definitely not seeing a shortage in capacity, and in case of need our gas-fired plants would be ready, even if some of them couldn’t operate at full capacity.”

Although it is hard to quantify the heat-related reduction of electricity generation across Germany because many power stations only curb generation partially and temporarily, there isn’t any concern for the power system as a whole. “We’re on she safe side,” a spokesperson of the Federal Network Agency (BNetzA) told the news agency dpa. 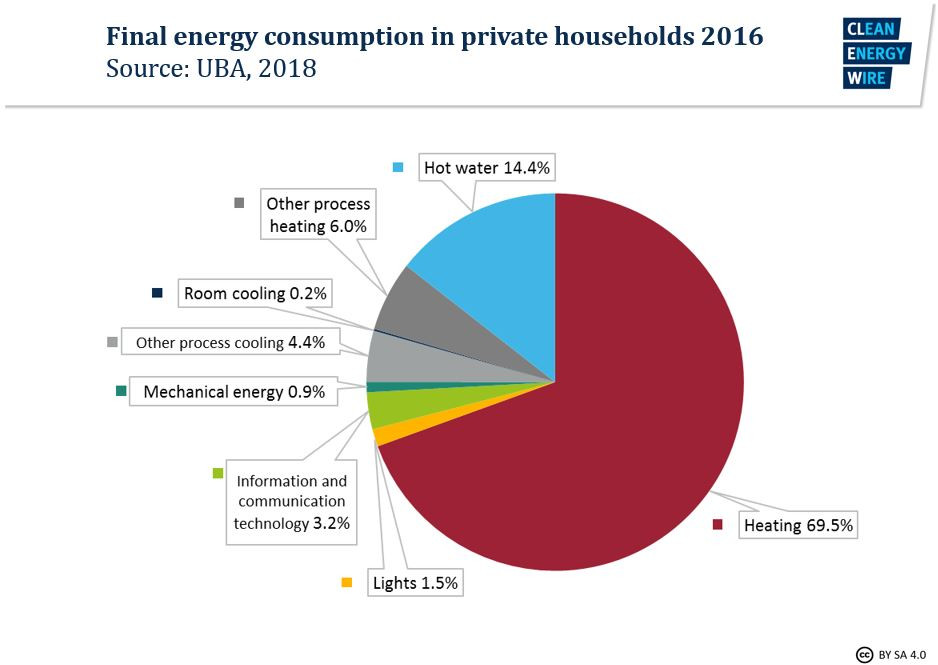 Energy consumption is low during the summer as people are on holiday and many companies cut back production. Most German households don’t have air conditioning systems, therefore room cooling devices are responsible for only 0.2 percent of an average private household’s energy consumption (2016).

Renewable energy sources could step into the breach where conventional energy supply falters in the heat, proponents of Germany’s energy transition – the dual shift away from nuclear power and fossil fuels to renewable energy – have highlighted in recent days.

Germany’s predominantly pumped hydro stations are also currently unaffected by the heat wave, Vattenfall spokesperson Lutz Wiese told the Clean Energy Wire. Vattenfall operates three out of seven gigawatts of installed hydro power capacity in Germany. Uniper, which operates another 2 GW of hydro power capacity in Germany, also says that nothing is out of the ordinary.

Battery storage facilities which could play an increasingly important role in a future energy system, are able to cope with heat because they all have air conditioning systems to maintain a constant temperature, Philip Hiersemenzel, spokesman at the Berlin-based battery system developer Younicos, told the Clean Energy Wire. “Our batteries are used around the world, also in places like Texas, where the temperatures that we have here at the moment are entirely common.”

The only renewable energy source that has so far failed to hold the fort while conventional sources are struggling is wind power. The high-pressure weather system that is causing the heatwave in Germany is accompanied by very little wind, so electricity output from wind power has been very low since the beginning of the hot period, Uwe Maaßen from the energy market research group AG Energiebilanzen (AGEB) told the Clean Energy Wire.

While wind and most conventional power sources struggle, one fossil fuel-based electricity supplier is running at full steam: “Lignite plants are not affected by cooling water issues because they source their water from the mines,” Maaßen explained. This could be borne out by the breakdown of Germany’s overall energy consumption by source in the second half of 2018. 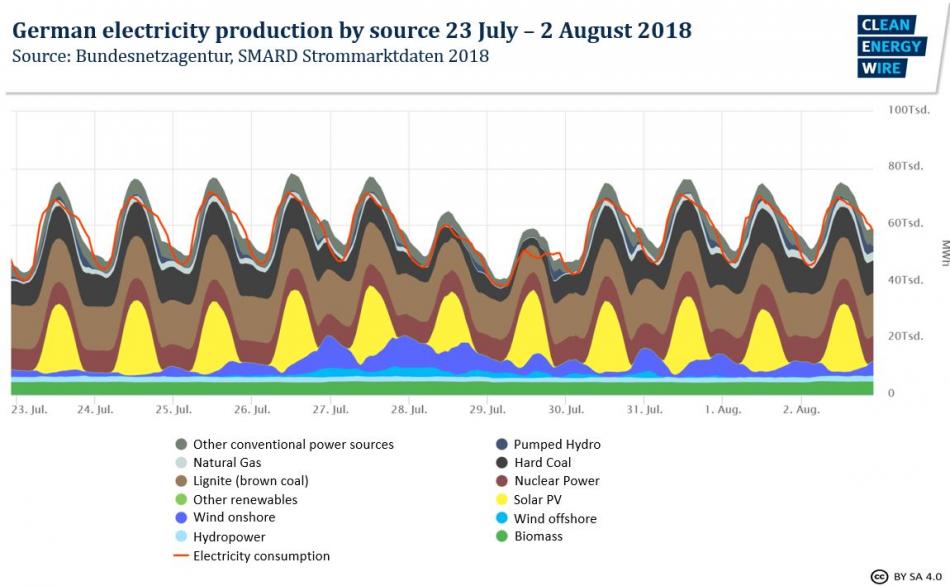 Get in touch if you have any requests, questions or suggestions.
Kerstine Appunn