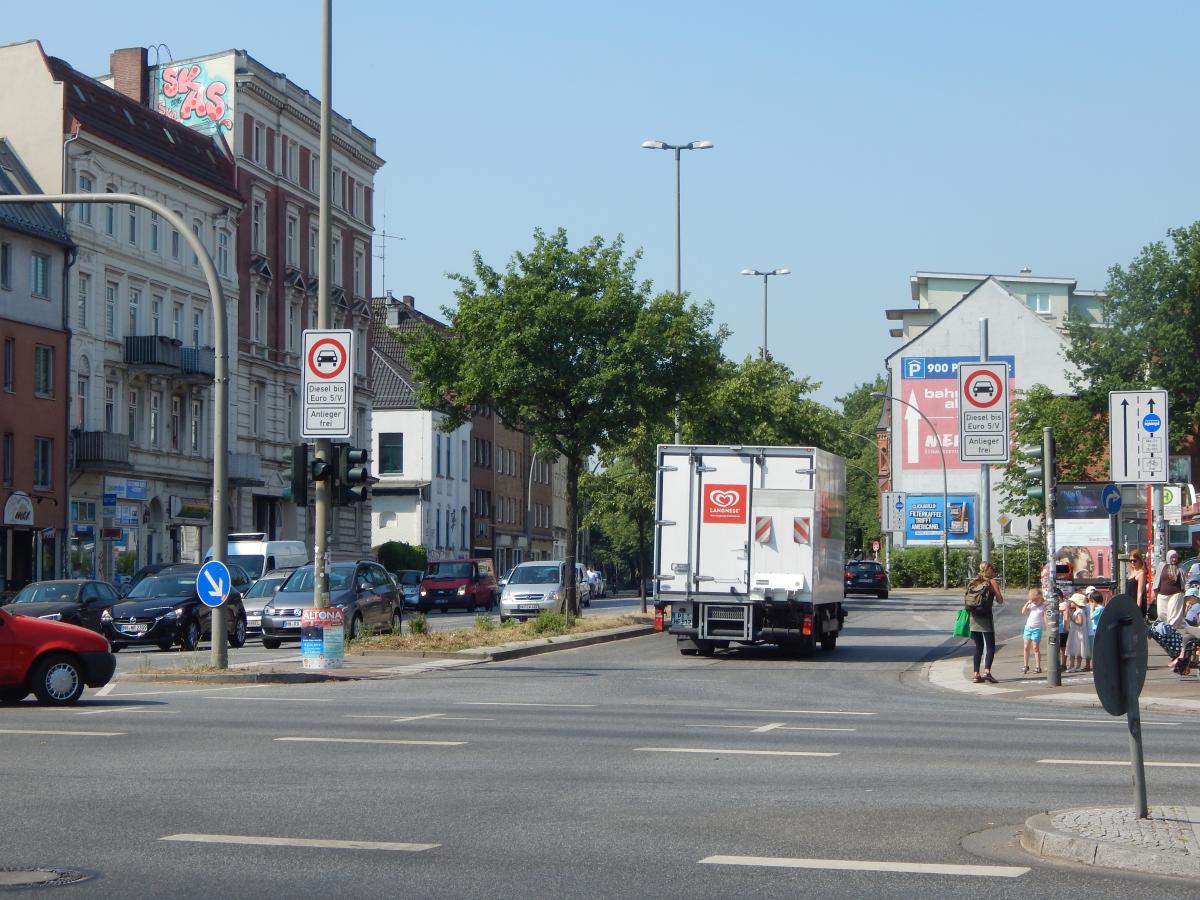 Traffic signs in Hamburg prohibiting the use of diesel cars. Source: C. Suthorn

With a national “diesel summit” in early August 2017, the German government tried to curb the fallout of the country’s emissions fraud scandal and avoid being sued by the European Commission over excessive air pollution. One year on, the first diesel driving bans have been put on some city roads, and the Commission has filed its complaint with the European Court of Justice. But the government coalition still remains split over how to deal with manipulated cars due to fears of damaging the country’s most important industry and alienating diesel car owners.

One year after Germany held its first so-called “diesel summit,” the country still grapples with the emissions fraud scandal caused by the carmaker nation’s most important companies. “Dieselgate,” as the scandal over manipulated emissions values and fraud devices installed in diesel cars has been dubbed, continues to weigh heavily on the reputation of renowned carmakers VW, Daimler, and BMW, as well as on important industry suppliers like Bosch.

The coalition government of Chancellor Angela Merkel’s conservative CDU/CSU alliance and the Social Democrats (SPD) is still split over how to deal with the scandal’s fallout and bring down air pollution levels in German cities to avoid further diesel driving bans in the country, as well as treaty violation proceedings over air quality brought forward by the European Commission.

While environment minister Svenja Schulze of the SPD insisted that manipulated cars need mechanical retrofitting to reduce emissions of nitrogen oxide (NOx) to the desired level, conservative transport minister Andreas Scheuer (CSU) said hardware retrofits are not an adequate method for solving the problem. “We would invest in old cars and also increase the fuel use of cars, which makes it undesirable from a climate perspective,” Scheuer told journalists in late July. Software updates for manipulated cars that were agreed on at the first “National Diesel Forum” in early August 2017 are sufficient to achieve workable solutions in the short run, he added. Chancellor Merkel said a final decision on the matter will be made by the end of September, arguing that “this cannot be postponed indefinitely.”

A more far-reaching strategy to get Germany on track for climate friendly mobility without hurting its cherished car industry remains elusive so far. Transport minister Scheuer openly rejected the idea of a “transport transition” similar to Germany’s energy transition, the switch from fossil fuels and nuclear power to renewables. Meanwhile, economy minister Peter Altmaier (CDU) has called for a determined push to the production and roll-out of e-cars and batteries in the country. German politicians fear that its mighty carmakers, in spite of record sales and profits in recent years, are at risk of falling behind international competitors from China and the US in the race for future car technologies.

Diesel cars emit less CO2 per kilometre than cars with petrol engines, a feature that has been used by the German government to propagate the use of the technology. However, they produce more potentially harmful NOx than other cars, often cited as a dilemma for environmentalists who have to weigh the effects of CO2 on the global climate against those of NOx on local air quality. However, a recent analysis by the International Council on Clean Transportation (ICCT) found that a decline of diesel sales is unlikely to threaten Germany’s climate goals. While the current debate is focussed on passenger cars, for which the diesel share has been declining constantly since the dieselgate scandal broke in 2015, lorries and other heavy duty vehicles, many of which run on diesel, are barely mentioned. [See the CLEW dossier on Cargo transport and the energy transition for background].

Doubts over feasibility of retrofits

Car industry experts are sceptical that the promised diesel car software updates can even be carried out in due course. Carmakers have pledged to implement updates in 5.3 million cars by the end of 2018, but so far only 2.9 million vehicles have been treated. “This is going to be a tight schedule,” Stefan Reindl, director of the Automotive Industry Institute at the Nürtingen-Geislingen University of Applied Sciences, told the Clean Energy Wire. About 2.5 million retrofits already carried out by carmaker VW were legally binding, but the remainder will be performed on a voluntary basis, making it less likely that sufficient progress will be made on time. “Customers ultimately decide if they want to implement the software update. But they often fear that this will increase fuel consumption or damage the engine,” Reindl said.

The car industry researcher added that the mechanical retrofitting of diesel cars is a complex procedure that makes it difficult to achieve the desired results soon enough. “I suppose that this solution is too complicated and expensive,” Reindl said. He argued that mechanical retrofitting will be unnecessary anyway if software updates deliver the promised result of reducing NOx emissions by 25 to 30 percent. “Also, older cars will gradually disappear from the national vehicle fleet, which will automatically improve the emissions record,” he said.

The European Commission has sued Germany and several other countries at the European Court of Justice for failing to implement adequate measures to bring down emissions levels in dozens of cities, where the annual threshold of 40 micrograms NOx per cubic metre is exceeded. Following a seminal court ruling in Germany in February, municipalities can impose driving bans in inner cities to meet the EU limit - a situation that the government promised to avoid by all means during last year’s election campaign. In June, Germany’s second city Hamburg was the first administration in the country to impose bans on selected roads. Other major cities, such as Daimler’s hometown Stuttgart, are set to impose sweeping bans by 2019.

At last year’s “diesel summit,” representatives of the car industry, environmental groups, municipalities, and the federal government also agreed on a so-called “Ad-hoc programme for clean air,” pledging to earmark one billion euros for measures to improve the air quality in affected cities, such as investments in electric vehicles, more public transport options, and smart traffic management systems. In its 2017 report on inner city air quality, Germany’s Federal Environment Agency (UBA) finds that NOx concentration levels did indeed fall compared to the previous year, but UBA meteorologist Ute Dauert said the improvement has little to do with the decisions made at the summit.

“Part of the reason is that a rather rainy and windy weather conditions last year helped bring down average concentration levels,” Dauert told the Clean Energy Wire. Also, action taken at the local level rather than by the federal government contributed to the improved record, Dauert added. Environmental Action Germany (DUH), which set the ball rolling on driving bans by suing cities over air pollution levels, called the air quality improvement programme a “spectacular failure” as none of the pledged money has yet been spent. It said carmakers have to be excluded from taking part in future summits as they “decided on the guidelines of transport policy.”

The UBA’s Dauert said nitrogen dioxide (NO2) levels are still much too high in many major cities, for example in Munich, where the pollution level is almost two times higher than the limit value. Even if all of the measures agreed at the summit are implemented, NO2 levels are likely to remain too high in more than 40 cities, Dauert said. She said she expected “a wave of fresh driving bans” across the country once the European Commission provides a detailed legal explanation of its complaint.

According to the Federal Environment Agency, hardware retrofits are an adequate measure to bring down emissions from diesel cars, even if these come at a cost for carmakers. But Dauert said that more needs to be done still to sufficiently improve air quality in inner cities. “Everything that reduces traffic volumes would help,” she said. “There are just too many cars on the road, and the fleet keeps growing year after year.”