The influential Federation of German Industries (BDI) has called on the government to come up with a strategy to secure the supply of scarce raw materials for “future technologies” needed for e-mobility, digitalisation, and the energy transition. “The growing demand for raw materials for future technologies warrants a paradigm change in resource policy,” BDI president Dieter Kempf said. He explained that a drop in prices following the international financial crisis had made such a strategy unnecessary, but the recent surge in demand now calls for a fresh approach. Kempf said Germany is “completely dependent on imports” of different types of raw materials, such as cobalt and rare earths. He added that while Germany has high ethical standards for procuring resources, the rise in demand means that supplier countries can chose who to trade with, and not the other way around.

Demand for cobalt is set to increase substantially over the next years, and fear of insufficient supply for a large-scale roll-out of electric cars has led the mineral’s price to skyrocket from 23,000 dollars per tonne to 90,000 dollars over the past two years, Germany’s Federal Institute for Geosciences and Natural Resources (BGR) has said in a press release. “We expect the shift to e-mobility to double the demand for cobalt to 225,000 tonnes by 2026,” the BGR’s cobalt expert Siyamend Al Barazi said. He warned that the difficult mining conditions in the world’s largest cobalt supplier country, the Democratic Republic of the Congo, could lead to “substantial supply problems.”

As negotiators are hammering out the rules for a global scheme to slow the growth in the airline industry’s carbon dioxide emissions, the airline lobby is calling for an end to the inclusion of the aviation sector in the EU’s Emissions Trading Scheme (ETS), newspaper taz reports. The ETS has included the aviation sector since the beginning of 2012. In 2020, a global programme, known as the Carbon Offsetting and Reduction Scheme for International Aviation (CORSIA), is scheduled to take effect. To prevent airlines operating in Europe from being “double-counted,” the EU ETS must cease to be extended to the aviation sector by 2021, the president of the German Aviation Association (BDL), Klaus-Dieter Scheurle, said. The German Green Party disagrees. Germany and Europe must “go their own way and send a clear signal to finally make progress in climate protection in air traffic,” Green MP Tabea Rößner said.

According to consultancy Aurora Energy Research’s May 2018 “German Plant Performance Summary”, the average load factors for thermal generation have declined for the third month in a row. In May 2018, renewable generation was 14 percent higher compared to the same period in the previous year, the consultants say. 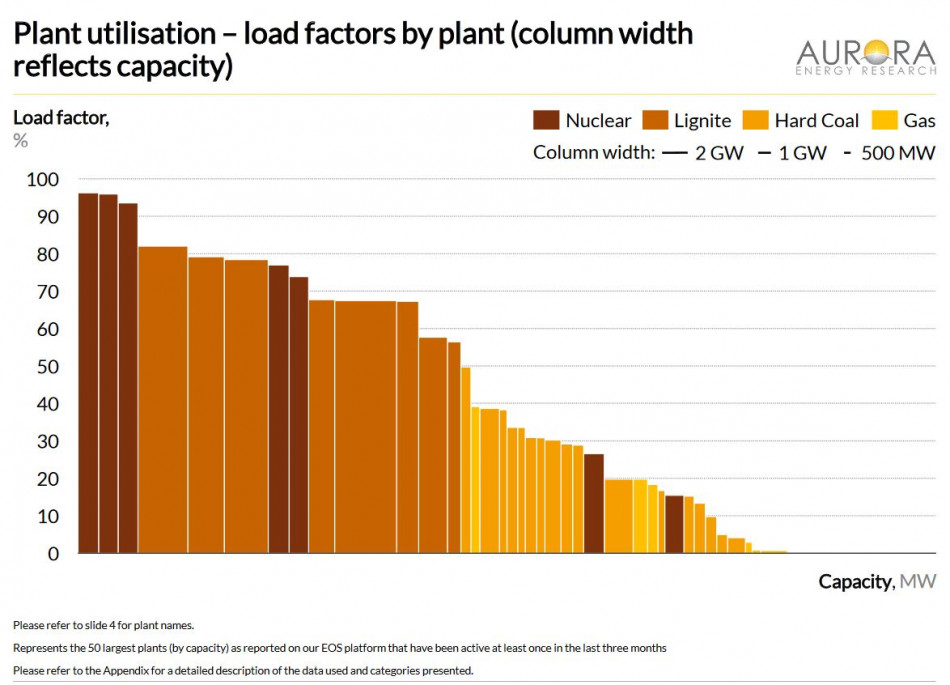 Since the federal government has set out to extend its energy transition project into the transport sector, car use in Germany has not changed, writes Friederike Meier in Klimareporter. Unlike neighbouring countries the Netherlands and Denmark, where a far higher share of people travel by public transport or by bike, Germany does not invest enough in alternative modes of transportation. German “streets send a message: take a car – and a big one at that! Everything else is uncomfortable and dangerous,” according to Burkhart Stork, head of the German Cyclists’ Association.

For background, read the factsheet Energiewende in transportation: Vague goals, modest strides, and the dossier The energy transition and Germany’s transport sector.

Ionity, a joint venture between BMW, Daimler, Volkswagen, and Ford, has opened its first rapid charging station for electric vehicles, according to Die Welt. Six electric cars can simultaneously charge at the station, located in western Germany. Each charger at the station has a charging capacity of up to 350 kilowatts. Four hundred more ultra-fast charging stations are planned to be opened in Norway, Germany, and Austria by 2020.

German energy company innogy has purchased California-based BTCPower. The acquisition will increase the company’s product portfolio in the North American market, and will strengthen its engagement in the United States, according to innogy.

Germany’s energy industry can reach its greenhouse gas reduction obligations for 2030 and 2050 purely by letting the European Emissions Trading System (EU ETS) do its work, Michael Vassiliadis, head of the mining and chemicals industry union IG BCE, said in a joint interview with the head of the Green Party, Annalena Baerbock. Baerbock called Vassiliadis’ line of reasoning “absurd,” arguing that the European CO2 price was too low to exert an effect, and that it mattered a lot whether Germany phased out coal power generation 20 years earlier or later. Vassiliadis warned that a speedy coal exit would see power prices rise, and would prompt energy-intensive industries to stop investing in Germany. As a result, jobs would be lost. Baerbock replied that people in coal mining regions deserved planning security, which a planned coal exit path could provide.

Read CLEW’s regularly updated coverage of the work of the coal commission tasked with planning a coal phase-out here.

Find the reports in German here.

For background, read the factsheet From ideas to laws – how Energiewende policy is shaped and the article Renewables hit record as concerns over German govt quarrel grow for more information.

Germany has granted about 100,000 million euros in subsidies to e-car buyers over the past two years, merely one sixth of the total sum authorities have earmarked for helping e-mobility get off the ground in the country, the Federal Office for Economic Affairs and Export Control (BAFA) says in a press release. “As things stand today, we can expect that the sum will be sufficient for the remainder of the support period,” said BAFA president Andreas Obersteller. In the two years since the government launched the so-called buyer’s premium, Germans have bought just over 66,000 e-cars using a government grant of 4,000 euros per vehicle maximum, the BAFA says. It adds that the average price was 28,100 euros for e-cars and 39,500 euros for plug-in hybrids.

See a CLEW dossier on Germany’s transport sector in the energy transition here.