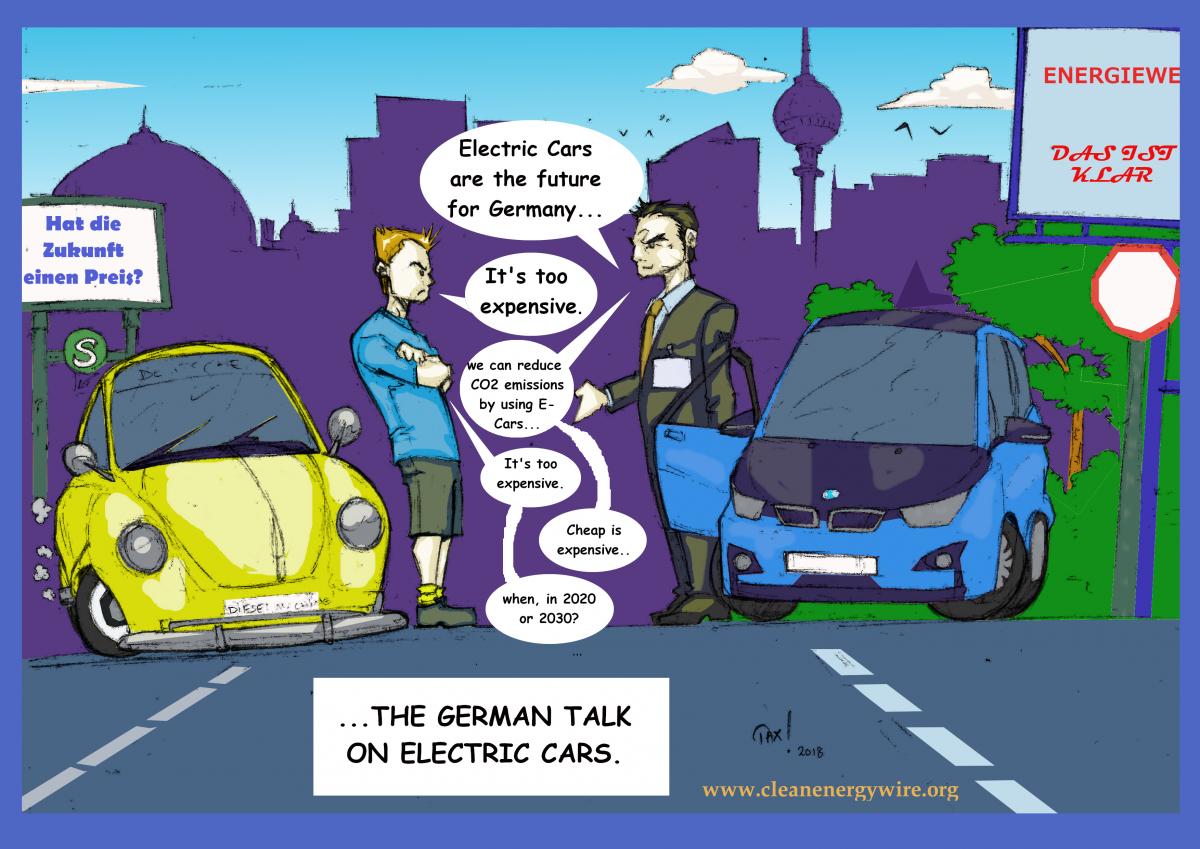 Association of the Automotive Industry

The German car industry will likely book record sales in 2018, but a whole range of challenges makes prospects for future business uncertain, the Association of the Automotive Industry (VDA) says in a press release. Tougher car emissions standards in the EU, the ongoing dieselgate scandal, high levels of investment in e-mobility, and looming trade wars with important buyer countries pose a series of problems “for the short, medium, and long term that are decisive for the future of our industry,” the new VDA head, Bernhard Mattes, said at the association’s biannual press conference. “We need a stable government in Germany that can deal with these challenges and make its industrial policy positions heard in the EU and around the world,” he added. With an estimated 16.7 million cars out of a total of 86 million that will likely be sold across the globe in 2018, German carmakers build more vehicles than ever before, and one percent more than in 2017. Over 11 million German cars are manufactured abroad and another 5.5 million in domestic factories, 76 percent of which are then exported. The German car industry employs 832,000 people, the VDA says.

See the CLEW dossier The Energiewende and German carmakers and the article Economy minister Altmaier calls for mobility transition push for background.

Daimler, Volkswagen, and other car manufacturers are investing billions of euros in the production of more than 200 hundred electric vehicle models between now and 2022, and that comes at a high cost, writes Franz Hubik in a commentary for Handelsblatt. Pre-tax profits of the 25 largest auto companies, such as Toyota and General Motors, have slumped since 2013, and the push towards electrification will put further pressure on their profit margins. “More electric cars are good for the CO2 balance sheet, but not so good for the company balance sheet – at least at the moment,” Daimler CEO Dieter Zetsche told his company’s shareholders in April.

For background, read the factsheet Reluctant Daimler plans “radical” push into new mobility world and the dossier The Energiewende and German carmakers.

Volkswagen plans to launch all-electric car sharing services. The carmaker said the platform dubbed “WE” will start rolling out various on-demand services in Germany in 2019. “These services are to be extended to major cities in Europe, North America and Asia as early as 2020,” according to Volkswagen. Apart from car sharing, the service could also include “micro-mobility solutions” such as electric scooters.

For background, read the dossier The Energiewende and German carmakers and the factsheet Dieselgate forces VW to embrace green mobility.

For the time being, economy minister Peter Altmaier will not specify a date for the launch of additional auctions for wind and solar energies, according to an article in the Handelsblatt. In their coalition treaty, the parties that make up the current government had agreed to organise special tenders for onshore wind and solar power. Altmaier said that the power grid is not prepared to accommodate the additional renewable electricity. Green Party politician Anja Hajduk and the head of the SPD’s left-wing caucus, Matthias Miersch, urged Altmaier to adhere to the coalition agreement.

For background, read the article Renewables hit record as concerns of German government quarrels grow and the factsheet Climate, energy and transport in Germany’s coalition treaty.

Government-owned bank discloses environmental and social impacts of its financing

In 2015 and 2016, Germany’s government-owned KfW bank issued nine ‘green bonds’ worth a total of 6.5 billion euros to finance renewable energies, KfW said in its report on the environmental and social impacts of these bonds. With a market share of 61 percent, the Frankfurt-based bank is the largest issuer of such bonds in Germany.

Read the press release in English here, and the report in German here.

For background, read the factsheet Climate finance: A brief overview of Germany’s contributions.

Federal government says ‘no’ to geoengineering

In response to an inquiry from the Green Party, the governing coalition has expressed its opposition to geoengineering, according to an article in the Tagesspiegel. Geoengineering refers to the controversial intervention in the Earth’s climate system, generally with the intent of slowing or reversing global warming. After communicating her approval of the current government’s wariness of such an intervention, Lisa Badum, climate policy spokeswoman for the Green Party, called on the economy minister to stop watering down EU-level energy targets.

Through a new online programme, house owners in the south German town of Freising can now determine if their roofs are suitable for solar panels, and how much it would cost to install them, according to an article in the Süddeutsche Zeitung. A collaboration between 17 municipalities, the programme was conceived to encourage more residents of the district to install photovoltaic systems on their roofs by mapping the area’s potential for solar power generation from above. “Solar panels are a central building block of the Energiewende,” commented Albrecht Gradmann, energy officer at the District of Freising.

For background, read the dossier The People’s Energiewende and the factsheet Citizens’ participation in the Energiewende.

The state government of Saxony in eastern Germany, where parts of the Lusatian lignite mining district are located, has published a master plan for future energy research, including the areas of nuclear security, battery production, and photovoltaics, Georg Moeritz writes in the Sächsische Zeitung. The plan is not meant to be construed as implementation of the energy transition, and does not discriminate against any form of energy, the ministers for science and economy said. Saxony is pursuing a “traditional energy policy,” in which the use of lignite (brown coal) is important for supply security. On the other hand, Saxony is actively involved in the energy transition project, and this requires energy research, economy minister Martin Dulig said.

Find a CLEW factsheet on Germany’s plan for a future coal phase-out here.

A premature phase-out of the lignite industry doesn’t make “climate policy sense,” it is “humbug,” writes Germany’s former economy and employment minister Wolfgang Clement in an opinion piece in the Handelsblatt. He argues that the legal end date for mining lignite in Germany is already set for the middle of the 2040s, and only the green lobby is pushing for an earlier exit date, which would cost thousands of jobs. Parts of Germany’s most populous state North-Rhine Westphalia (NRW) that used to depend on hard coal mining are still suffering from higher than average unemployment, he says.

We are welcoming Mwelwa Musonko (@MwelxTax) as our visiting cartoonist at CLEW. Mwelwa is a Zambian comic book artist and founder of Foresight Comics who is in Germany for the summer after winning the Horst-Köhler-Journalism-Grant of the International Journalism Programme (IJP).

Inspired by the rather curious fact that Germans are reluctant to exchange their old petrol and diesel cars for electric ones despite a 4000-euro government subsidy per vehicle, this is his first illustration – more are to follow in the coming weeks. 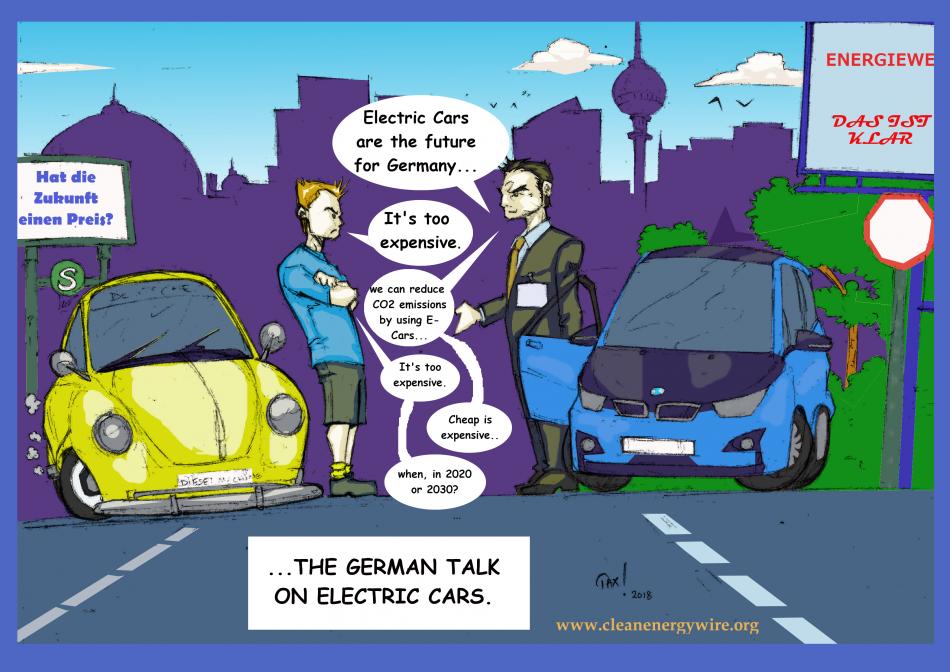