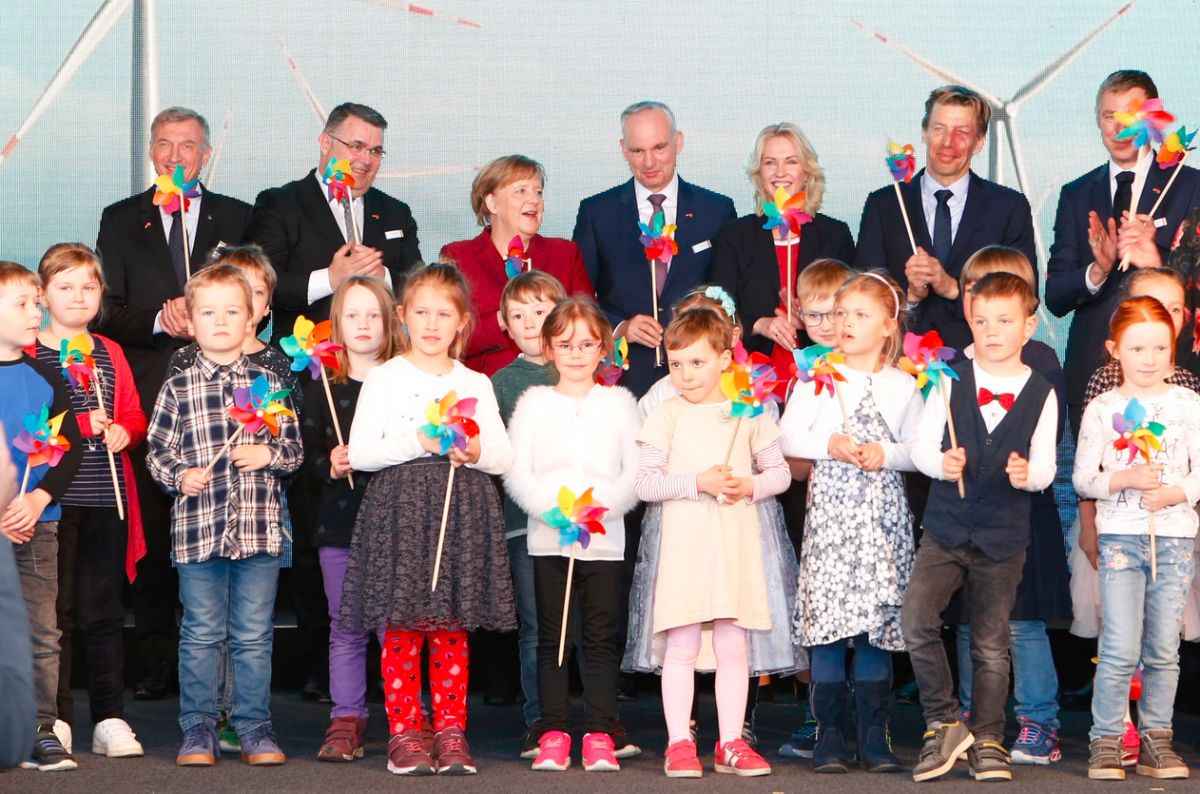 Merkel (back row in centre with red blazer) inaugurates the wind farm together with a group of local children. Photo: E.ON.

The opening of a new offshore wind farm in the Baltic Sea gives Germany's Chancellor Angela Merkel an opportunity to show her climate policy credentials and welcome the German-Norwegian project as a milestone for the energy transition and international cooperation. But the opening comes at a time when the chancellor faces increasing pressure at home to come up with policies that help bring down Germany's emissions in line with its international climate action obligations. Moreover, the national wind power industry increasingly warns that local resistance and restrictive regulation could well mean that the country's renewables expansion targets are difficult to meet [UPDATES Technical details of wind farm; more quotes by Merkel].

Ten years after Germany opened its first offshore wind farm in the North Sea, Chancellor Angela Merkel has opened the country’s newest offshore power station, demonstrating that early doubts about the technology were largely unfounded. In her weekly video podcast, Merkel said she was opening the project to make clear “how important the expansion of renewable energy is for us.”

The Arkona wind farm, named after a nearby cape on the island of Rügen, where Merkel’s constituency is located, was built over the course of three years at a cost of 1.2 billion euros and is the Baltic’s largest. It is operated by energy companies E.ON from Germany and Equinor from Norway, which is why Merkel was accompanied by Norwegian energy minister Kjell-Borge Freiberg at the ceremony. With a capacity of 385 megawatts, the park consisting of 60 turbines by manufacturer Siemens-Gameas was built 35 kilometres off the coast and could theoretically supply about 400,000 German homes with electricity, according to Equinor.

Merkel said the Arkona wind farm was setting a new standard for the transformation of Germany’s energy system in the Energiewende. Renewables had become Germany's most important source of electricity. "This shows that renewables have left their niche and now take centre stage in our energy supply," she argued. “But only changing the way we produce energy won’t be enough,” the Chancellor said, adding that changes in the heating and in the transport sector were also forthcoming, although progress there was much more difficult to achieve.

The wind farm, operated by the utility E.ON, comes at a time when the German government is under pressure to formulate a clear climate policy. German students have been staging weekly “Fridays for Future” school strikes, demanding more action on climate change, and some lawmakers have worried aloud that many future voters could turn their back on the governing parties if Merkel’s government does not act.

At the same time, lawmakers run the risk of alienating voters in mining regions as they strive to implement the seminal agreement from the nation’s coal exit commission, announced this winter. The commission recommended ending coal-fired power generation by 2038 at the latest, and some voters fear their jobs are being sacrificed to fulfill national climate targets. "We must avoid the impression that our society is being split into one group that lives off and with future-proof power generation and another one that carries all the burden," Merkel said in her inauguration speech, adding that "we must give great priority to this debate."

But the expansion of renewable power sources also starts to bring about progress in emissions reduction. Merkel’s inauguration of the wind farm comes just days after Germany’s environmental agency, UBA, announced that the country’s carbon emissions had declined substantially in 2018. It was the steepest emissions drop in ten years - and it was made possible in part,by the growth of offshore wind. “There used to be a great deal of scepticism at the beginning of the offshore era,” Jörg Buddenberg of energy company EWE told news agency dpa in an article carried by newspaper Süddeutsche Zeitung. Buddenberg said early critics argued that the previously unexplored technology would never work.

While offshore wind had to surmount several technical difficulties in its initial stage, Germany now has more than 1,300 operational turbines at sea with a combined capacity of 6.4 gigawatts (GW). Offshore wind farms produced nearly 19 Terawatt hours (TWh) of electricity in 2018. That's about twice the average output per installation of their onshore counterparts, adding up to nearly one fifth of the country’s total wind power generation.

But the wind industry says the technology’s potential still is not fully appreciated, calling for the government to raise the country’s offshore wind expansion target from 15 to 20 GW by 2030 and to 30 GW by 2035. Offshore wind lobby group BWO argues that without the higher targets the government goal of 65 percent renewable power consumption cannot be achieved. According to research institute Fraunhofer IWES, Germany could potentially install up to 54 GW of offshore wind power and generate nearly 260 TWh of electricity at sea. An expansion of that magnitude has drawn skepticism from environmentalists, who worry that turning large swathes of Germany’s territorial waters into industrial zones could have grave consequences for already strained ecosystems in the North and Baltic Seas.

The wind lobby’s calls for greater expansion have been supported by a substantial decrease in the cost of offshore wind power, with the average generation costs per kilowatt hour (kWh) dropping from over 14 cents in 2013 to a little more than 8 cents in 2018. Several zero-support bids in Germany’s first offshore wind power auctions have further supported the conviction that the technology has vast potential for a cost-efficient energy transition. 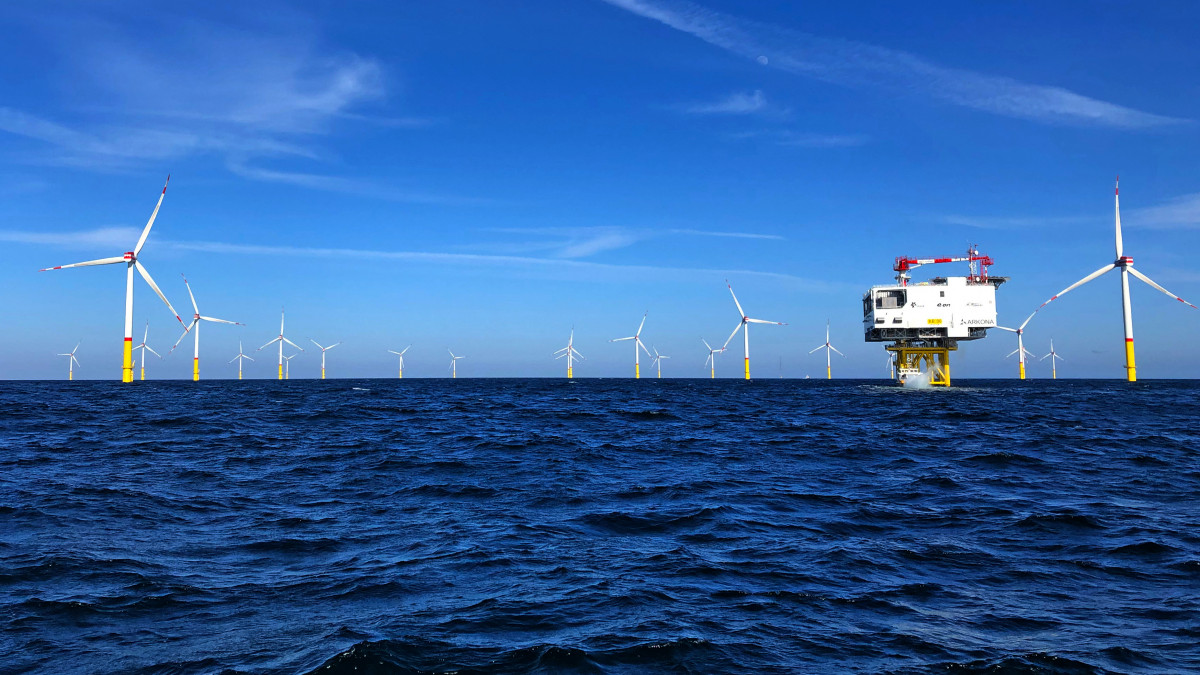 The new Arkona farm could power up to 400,000 average homes in Germany. Photo - Equinor

But wind power companies and lobby group BWE have complained about the cost pressure created by the auction scheme. In what had been one of the biggest setbacks for a German wind company, turbine producer Senvion filed for insolvency in April. While the company’s demise was seen as partly due to managerial mistakes, news agency Reuters noted that cost pressure meant it could no longer compete with companies that have greater pricing power, such as German-Spanish Siemens Gamesa or Danish Vestas. Newspaper WirtschaftsWoche said despite growing wind power capacity around the world, small and middle-sized companies like Senvion or its fellow German turbinemakers Nordex and Enercon could increasingly face insurmountable difficulties – especially with Chinese companies hoping to make an entry into the German wind power market similar to China's takeover in the solar industry.

Wind power lobby group BWE says international market pressure is not the only obstacle, arguing that national regulation also poses an increasing challenge. Rising local resistance to new onshore projects is compounded by uncertainties following the switch to Germany’s renewables auction system. That means that reaching the climate and renewables expansion targets becomes increasingly uncertain, BWE says. In Bavaria, the BWE argues, a strict implementation of the so-called 10H-rule, which stipulates that turbines have to maintain a distance of ten times their height to the next residential area, means that the expansion in the state “has been throttled down to almost zero.”

The 10H-rule established in Bavaria has also been mulled by other state governments in a bid to ease resistance against wind power projects. Germany's environment agency UBA warned that a limit of only 1,000 metres, which would not even be enough for many of the new powerful but also very high turbines,  would reduce the land available for turbines by 20 to 50 percent. This would render a sufficient expansion of wind power to meet Germany's climate targets “almost impossible”.