The Social Democrats (SPD) achieved a decisive victory in Sunday's Lower Saxony state election, but didn't garner enough votes to continue their government coalition with the Green Party, Hannoversche Allgemeine Zeitung (HAZ) reports. With a (preliminary) result of 36.9 percent, the SPD clearly beat Chancellor Angela Merkel’s CDU, which received 33.6 percent of the vote. The SPD’s victory in the northwestern state is seen as decisive for the party, which incurred its worst result in the Federal Republic's history in national elections three weeks ago. It is also a setback for Merkel, whose party won the federal election but also incurred heavy losses.
In a separate article, news agency Reuters says the result further weakens Merkel as she prepares to negotiate a coalition with the Greens and the pro-business FDP. The CDU’s secretary general Peter Tauber noted that all three parties involved in national coalition talks had lost support in Lower Saxony but said he didn't see negotiations influenced by the result. “It wouldn’t be wise to think this will weigh us down,” he said. 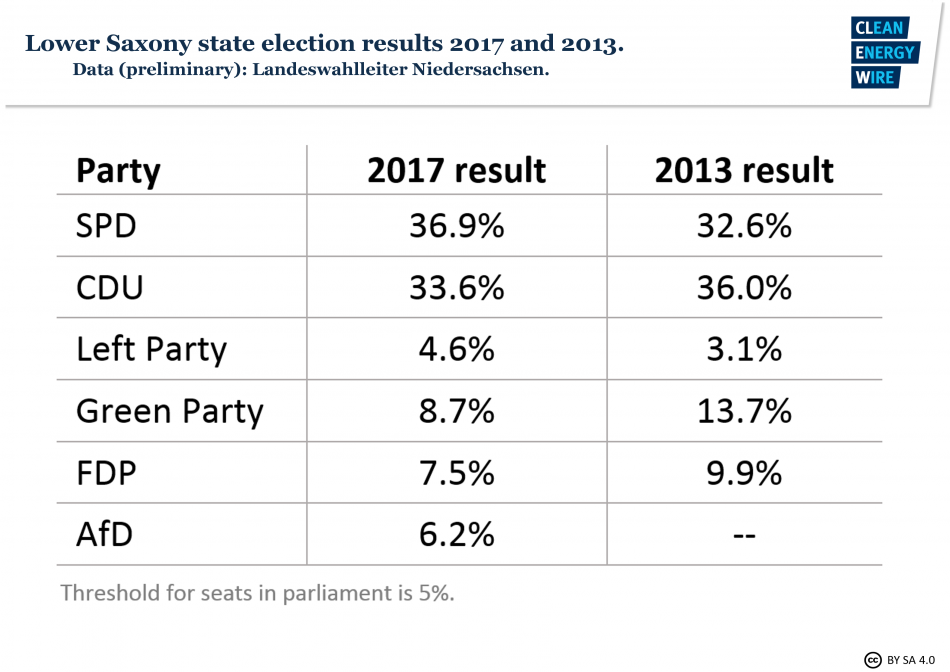 Read the article by HAZ in German here and the Reuters article in English here.

Renewables levy to fall slightly in 2018

The EEG surcharge – Germany’s levy to support renewables expansion that consumers pay with their power bill – will fall to 6.792 cents per kilowatt hour (ct/kWh) in 2018, from 6.88 ct/kWh in 2017. The country’s four transmission grid operators (TSOs) expect an increase of renewable power feed-in, mainly from onshore and offshore wind parks, but a projected increase in wholesale power prices would lower the support payments to renewable power producers. More than a third of the levy will be used to pay solar PV power producers, about a fourth for biomass and onshore wind respectively, and about 14 percent for offshore wind power producers, write the TSOs in a press release.

For background, read the CLEW factsheets Defining features of the Renewable Energy Act (EEG) and What German households pay for power.

Germany’s renewables levy could be lowered even further next year if exemptions for energy intensive industries were financed via the federal budget, instead of with the levy, writes the German Association of Energy and Water Industries (BDEW) in a press release. “This would instantly lower the EEG surcharge almost by a fourth,” said BDEW head Stefan Kapferer.

For background, read the CLEW factsheets Germany ponders how to finance renewables expansion in the future and Defining features of the Renewable Energy Act (EEG).

The EU Environment Council has agreed on its position regarding emissions targets for member states from 2021 to 2030, aimed at cutting greenhouse gas emissions in sectors outside the scope of the EU emissions trading system (ETS). For Germany’s buildings, agriculture, waste management, transport and industry sectors this would mean a reduction of 38 percent by 2030, compared to 2005 levels, writes the environment ministry in a press release. The EU aims to reduce overall emissions by at least 40 percent by 2030, compared to 1990 levels. Non-ETS sectors will specifically contribute to that target through a reduction in emissions of 30% by 2030 compared to 2005 levels. The Council and the European Parliament will now enter negotiations for a final text.

German Sonnen will supply the largest home power storage project in the Unites States with solar PV and battery systems, reports Christian Roselund for pv magazine. Each of the 2,900 homes in a new residential area in Prescott Valley, Arizona will receive its own solar PV facility and battery to set up a network of homes and businesses with peer-to-peer electricity trading from PV and battery storage systems. “It’s the sort of thing that can happen in Germany’s liberalised electricity market […] but it is not the sort of thing that one sees coming any time soon to the United States, with our anachronistic monopoly utilities and very different set of rules, even in our 'deregulated' markets,” writes Roselund. “The fact that we’re realising this project on Tesla’s home turf shows that we surpass Tesla in the US on a technological level in the area of energy,” said Philipp Schröder, managing director at Sonnen in a press release.

Over two thirds of Germans say CO2 emissions should be assigned a price to finance the transition to carbon-neutral technologies, a survey commissioned by heating manufacturer Stiebel Eltron has found. 70 percent of respondents said they favoured such carbon pricing and nearly half said they wanted to replace current surcharges and levies on the power price with the CO2 price. According to the company, 64 percent of respondents said power costs prevented them from changing their heating to an electricity-based system.

The world’s largest wind turbine manufacturer, Siemens-Gamesa, has downgraded its business prospects without specifying the reasons for the adjusted prognosis, the Frankfurter Allgmeine Zeitung reports. The German-Spanish company that merged about half a year ago has corrected its ebit (earnings before interest and taxes) outlook for the last quarter of the current business year to 790 million euros, after 945 million euros in the same period last year. “Difficult market conditions in the wind turbine business due to new tender schemes with prices close to open market levels, fierce competition and margin pressure are reasons for the visibly deteriorated situation,” the newspaper says.

The Green Party in Germany’s most populous federal state North Rhine-Westphalia (NRW) held a symbolic wreath-laying ceremony to protest the state government’s restrictive wind power policy, Rheinische Post reports. The state’s governing coalition of the conservative CDU and the pro-business FDP decided to increase the minimum distance for new turbines to residential areas to 1,500 metres. This has had “dramatic consequences” for the renewable energy source’s expansion and the Energiewende’s success in general, the Greens say. At a new wind farm near the city of Wachtendonk, the Greens held the protest ceremony saying that the installation “would not have been possible under the new conditions.”

Scientists have discussed the possibility of geo-engineering to curb the warming of the earth's atmosphere, Christoph Schrader writes on Spiegel Online. At a conference in Berlin, researchers debated measures such as reforestation, extracting CO2 from the atmosphere, or cloud manipulation. “The voluntary contributions of countries to lower greenhouse gas emissions in line with Paris [Climate Agreement’s] goals will hardly be sufficient,” Schrader says. While some scientists say there is no need to discuss such interventions to protect the climate before conventional measures are fully exploited, most projections on how the Paris goals can be achieved include at least some form of geo-engineering, Schrader writes. “In any case, society should have a broad debate that defines rules for possible geo-engineering attempts,” he says.

See the CLEW dossier The energy transition and climate change for more information.

German carmaker VW will focus on competing with US e-carmaker Tesla in its home market to avoid trailing behind the US company in electric mobility, the Frankfurter Allgemeine Zeitung reports. As Tesla shifts from offering expensive e-cars to cheaper models for the mass market, VW would “rather focus on Tesla than on Toyota or Hyundai,” VW brand manager Herbert Diess said in an interview with car magazine Automobilwoche, the newspaper writes. VW says it will introduce an “appropriate” car model in the US by 2021.

German industry fears the next government coalition could make “rotten compromises” on energy and climate policy, Klaus Stratmann writes in Handelsblatt. While the Greens are adamant on climate protection and shutting down coal plants, its potential coalition partners, the conservative CDU/CSU and pro-business FDP,  “have a more moderate position,” Stratmann says. Dieter Kempf, president of the Federation of German Industries (BDI) said the aspiring coalition partners should adopt a “realistic and reliable course” on energy and climate and avoid “an immediate coal exit.” If coal power were phased-out soon, power prices would rise considerably “and value creation and emissions will move abroad,” which would damage Germany without aiding the climate, Kempf said. Industry representatives have voiced doubts about the other parties’ resistance to the Green coal plans, especially since Chancellor Angela Merkel recently said a coal exit must be discussed “with the people on the ground,” falling short of highlighting such a move’s consequences for industrial production.