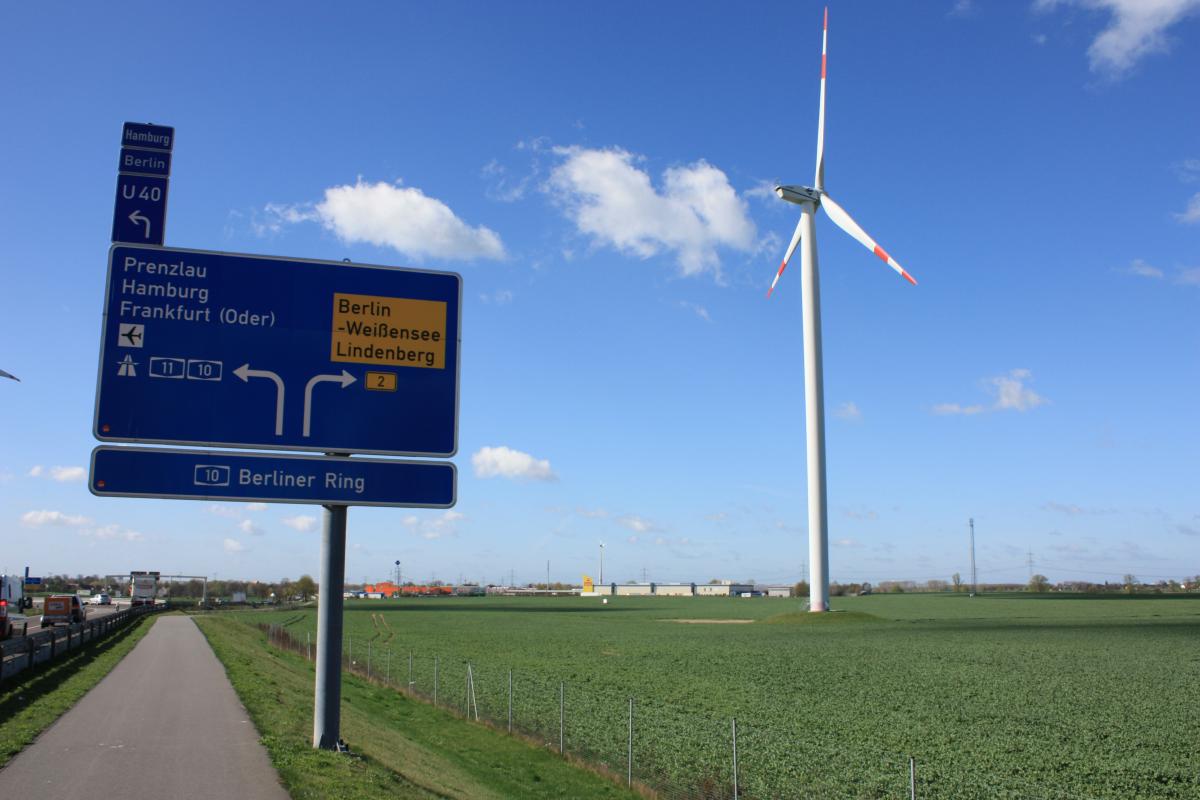 A windmill spinning near Berlin - Source: Clean Energy Wire
The dominance of citizens’ energy projects among the successful bids in Germany’s first onshore wind power auctions comes as a big surprise for industry observers. Not only did citizen cooperatives account for the bulk of accepted projects, with average remuneration rates well below those prevailing before auctions, the government’s plan to lower costs through competition seems to be working. Citizens’ energy’s success is likely to influence debate on renewables support outside Germany, but observers warn it remained to be seen how many projects are actually going to be implemented.

“Citizens' energy is the big winner,” state secretary Rainer Baake from the Federal Ministry for Economic Affairs and Energy (BMWi) said in a press release. 93 percent of all successful bids came from citizens’ energy cooperatives, which had already played an important role in boosting the energy transition’s acceptance in the past through their local rootedness. “We will also need them in the next stage of the Energiewende,” the state secretary stressed.

The German government’s move to introduce auctions to determine the remuneration for new renewables installations has been met with fierce oppositions from the renewables industry and the Green Party. They feared that projects owned by citizens had little chance to meet the requirements of the auctions and compete with larger players. The government hopes to bring down the costs of the next phase of the country’s Energiewende, the move to a low-carbon economy while at the same time phasing-out nuclear power.

Just one month ago, the first tender for off-shore windparks to start operation by 2025 saw companies winning without even asking for any support payment.

Baake said the average remuneration of 5.71 cents per kilowatt hour (kWh) in the onshore auction showed “the paradigm shift from fixed support rates by the state to a market-based price setting has worked well.” A total of 70 bids with a volume of 807 megawatt (MW) were accepted, 65 of which came from citizen energy cooperatives, the Federal Network Agency (BNetzA) said. The fact that only five percent of all 256 submitted bids had to be rejected due to formal errors showed that “bidders understood the procedure” [See the CLEW factsheet describing the auction process] and auction requirements had been manageable, it added.

Citizens’ energy cooperatives, which comprise 96 percent of the auctions’ volume, will receive a remuneration equal to that of the highest accepted bid due to a special provision, the BNetzA explained.

Citizens’ projects have to consist of at least ten people, the majority of whom live in the region where the wind park is built, and are capped at a capacity of 18 MW. They are also granted 54 months for implementation instead of 30 months required for larger bidders. “An accurate assessment of the implementation rate and the achievement of wind power expansion goals will only be possible at a significantly later point in time,” the BNetzA said.

“We’ll have to wait and see”

“This result has been a big surprise for us,” Stefan Gsänger from the World Wind Energy Association (WWEA) told Clean Energy Wire. While the price level was in the range of what had been expected by the WWEA, “we didn’t think that citizens’ projects would make up such a large chunk of successful bids,” he said.

However, Gsänger warned it was too early to judge whether the high share of citizens’ projects would actually turn out to be a success: “We’ll have to wait and see how many projects are going to be implemented in the end.” He also said it remained to be seen in the next round of auctions whether citizens could again “dominate” or if the first round’s results were simply due to false estimates by larger companies regarding the average demanded support level.

The German results would in any case be closely watched by wind energy project developers abroad, Gsänger added. “We at the WWEA were somewhat worried about the global trend towards auctions” since these tended to disadvantage smaller bidders, he explained. Other countries would now examine the special provision for citizen projects in Germany to see whether they offer lessons for efficiently supporting smaller bidders. “This is certainly going to have an impact on the debate,” he said.

The German Wind Energy Association (BWE) said authorities had to “positively assist” citizens’ energy cooperatives in their projects’ licensing procedures. 95 percent of citizen bids used the special provision of submitting their application prior to the required licensing procedure in line with Germany’s immissions protection law (BImschG). “A quick implementation of these projects is key for the Energiewende and the attainment of climate protection goals,” the BWE said.

Power provider Greenpeace Energy welcomed the success of many citizens’ projects in the first round of auctions but said it was now necessary to ensure that these projects “are actually carried out by committed citizens – and not by big investors in disguise like in many other cases,” Greenpeace Energy’s Marcel Keiffenheim said. “This makes a decisive difference.”

Renewables utility innogy, which managed to secure some of the few successful bids not granted to citizens’ projects, said the results demonstrated that it was “able to prevail in a very competitive market environment.”

Agora Energiewende estimates costs at “excellent locations” in Germany could further drop to 3 to 4.5 ct/kWh, similar to today’s top locations, such as Peru or Morocco. Wind power already ranks among the cheapest of all energy sources and “the technology’s potential is far from being fully developed,” Deutsch added.

Thomas Bareiß, energy policy representative of the CDU/CSU parliamentary group, said the results showed that switching to auctions for renewables support was the right move. “The high turnout in the auction and the many citizens‘ energy projects that were successful clearly refute the critics that have mobilised against the auctions. Auctions are the right way.”

Stefan Kapferer, head of Germany’s largest utility association BDEW, said auctions “lead to more efficiency and are apt to bring renewable energy to the market.” The success of citizens’ energy projects proved that “fears of reduced actor diversity were unfounded.” Kapferer called on the BMWi and the BNetzA to “analyse the results and assess whether the multitude of special provisions [for citizens' projects] is appropriate.”