Merkel’s promise: We will find ways to meet our climate target by 2020

In a televised town hall campaign event, Chancellor Angela Merkel promised voters that Germany would find ways to meet its ambitious target to reduce greenhouse gas emissions by 40 percent by 2020. One young first-time voter asked about shutting down coal-fired power plants to reach climate targets: “You made a name for yourself with the nuclear exit – although it took the Fukushima catastrophe for this to happen. So I ask myself: What are you waiting for with the coal exit?”. Merkel said that many coal-fired power plants had already been switched off or designated for “security standby”, and added that this seemed not enough for the young voter. “I say we will find ways to meet our target by 2020. I promise you that,” said the Chancellor. She added that she had fought for international climate agreements from the moment she became environment minister, and this meant that Germany had to be a trailblazer. “We have to be the pioneers in modern technology.”

See the CLEW article Germany heads for "spectacular" 2020 climate target miss- study and the factsheets The story of “Climate Chancellor” Angela Merkel and When will Germany finally ditch coal?

After 15 years of construction, the new power transmission line from eastern Germany to Bavaria in the south “closes one of the most severe bottlenecks in the European power grid,” Daniel Wetzel writes in Die Welt. The 200-kilometre-long line connecting Bavaria with wind power and lignite plants further north was completed just in time, as the shut-down of Bavarian nuclear plant Gundremmingen B in December will leave a gap to be filled in Germany’s geographically largest federal state, Wetzel says. With a transmission capacity of about 5,000 megawatts (MW), the line dubbed “Thuringia Power Bridge” is capable of transferring the equivalent of the power output of five nuclear plants, Wetzel says. Boris Schucht, CEO of grid operator 50 Hertz, which covers that part of the country, says the completed transmission line was “a milestone for the Energiewende that makes a substantial contribution to enabling the nuclear phase-out.”

Get background in the CLEW dossier The energy transition and Germany’s power grid.

Chancellor Angela Merkel’s gentle opening speech at the Frankfurt car show contrasts sharply with her recent statement that she was “furious” at the carmakers because of the emissions scandal, writes Martin Gropp in a commentary in the Frankfurter Allgemeine Zeitung. She “handled the industry with kid gloves, repeating arguments used by the industry.” Gropp argues her soft approach “must not lead the industry to continue as before.”

Wind power operators might have manipulated the output of their installations for many years in order to receive a higher guaranteed remuneration via the renewables surcharge paid by power customers, Jakob Schlandt writes in Hamburger Abendblatt. Germany’s Renewable Energy Act (EEG) provides “a loophole” by granting operators of turbines at weak wind locations a higher remuneration than at very productive locations after five years, which might have prompted operators to throttle down their installation’s output in the initial phase, Schlandt says. A 2014 study by think tank Agora Energiewende* said that a single turbine could receive up to 600,000 euros more over the guaranteed remuneration time span of 20 years if manipulation of the EEG’s so-called “reference yield model” is carried out effectively, he writes. The German government has known about the loophole for years, Schlandt argues, adding that Berlin decided to look the other way and allowed operators to provide only incomplete data on their turbines’ daily output. 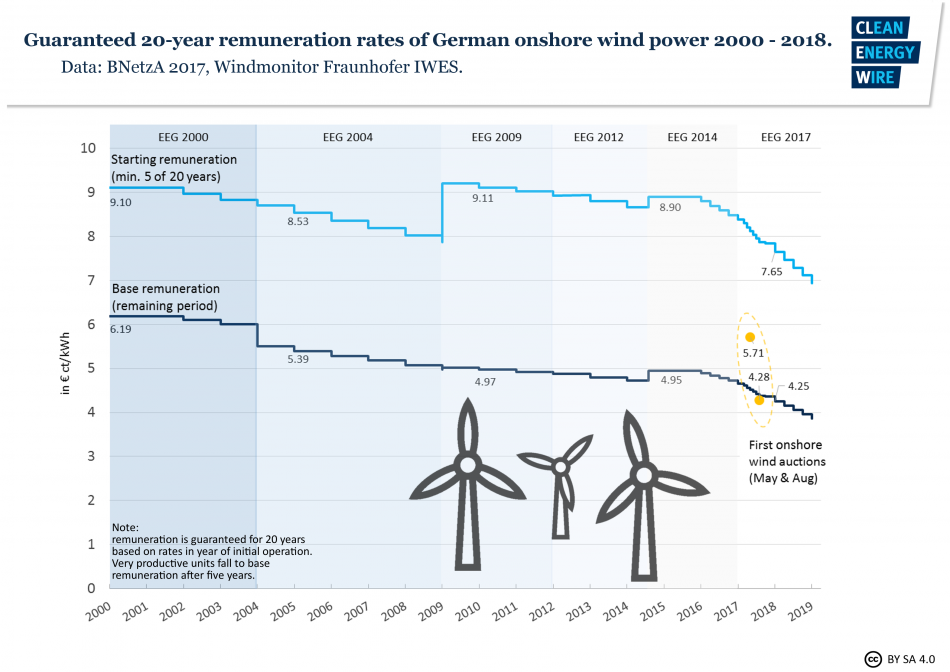 The number of companies in Germany that do not pay grid fees is set to rise further, Spiegel Online reports. According to an answer by the federal government to a parliamentary inquiry by the Green Party, there were about 3,670 fee exemptions in 2016 and the figure could rise to over 4,000 this year, the article says. Green parliamentary group leader Oliver Krischer told journalists that the additional exemptions could lead to other power customers paying up to 400 million euros more to compensate for the funding losses resulting from additional exemptions.

"Many election manifesto pledges concerning the German energy transition project appear to be based on wishful thinking and contain little information about the measures required or the expected costs," writes Deutsche Bank Research in a paper on industrial policy. “We think it would be sensible and honest to focus more strongly on what is genuinely achievable, even if this means that some individual energy transition objectives need to be reformulated or shifted to the European level,” writes Deutsche Bank.

While environmental considerations now play a larger role, they are still not among the key influencing factors for buying a car, and “come behind aspects such as ergonomics or brand image,” writes Deutsche Bank Research in a paper.

Find the paper in English here.

For background, read the CLEW dossier The Energiewende and German carmakers.

Increased investments in Asia helped German manufacturers of components, machines and equipment for the photovoltaic industry boost turnover by 51 percent in the second quarter of 2017, compared to the first quarter, writes the German Engineering Federation (VDMA) in a press release. “Full order books are a clear sign that there is a global unbridled confidence in technology and machines made in Germany. This secures jobs in the solar industry in Germany," said Peter Fath, Chairman of VDMA Photovoltaic Equipment.