The German government is still a long way from finding a common position on future EU car fleet emission limits, report Till Hoppe and Silke Kersting in the business daily Handelsblatt. German car makers’ works councils and the top brass of metalworkers’ union IG Metall will meet the Social Democrat ministers for finance (Olaf Scholz), environment (Svenja Schulze), and employment (Hubertus Heil) on 24 September to prevent what they consider too ambitious targets, according to the report. Germany’s vote could be decisive for the new EU legislation, the newspaper reports.
The conservative-led ministries of economic affairs (Peter Altmaier) and transport (Andreas Scheuer) both reject an environment ministry call for more ambitious targets. Environment ministry sources told the authors their call for more ambitious limits is not dead yet, and that union warnings of drastic job losses triggered by strict CO2 limits are greatly exaggerated. The European Commission has proposed to reduce car emissions by 30 percent by 2030, and by 15 percent by 2025, compared to 2021 levels. Germany’s environment ministry has pushed for minus 50 percent by 2030 and minus 25 percent by 2025.
In a separate commentary, Hoppe argues that carmakers need ambitious but realistic targets as a push in the transition to electric mobility for the sake of both climate and jobs, because they have been dragging their feet. “Especially China will push electric cars into the market with all its might. Our carmakers have to be prepared if they don’t want to end up like the solar industry,” writes Hoppe.

The German government will support hardware retrofitting for large municipal diesel vehicles in certain polluted cities, such as garbage or street cleaning trucks, writes the transport ministry (BMVI) in a press release. This could affect at least 20,000 vehicles across Germany. As these vehicles operate full-time in polluted inner cities, “hardware retrofitting actually makes sense,” said transport minister Andreas Scheuer. “This measure is significantly more effective than retrofitting millions of old diesel cars that enter the city only once in a while.” In contrast, environment minister Svenja Schulze calls for hardware retrofitting for passenger cars. Chancellor Angela Merkel had announced that her government would find a joint stance by the end of September, which would mean that the two ministers have to find a compromise before Bavarian state elections in October, writes the Süddeutsche Zeitung in an article.

Find background in the CLEW article One year after German "diesel summit," air quality challenge remains and in the factsheet “Dieselgate” – a timeline of Germany’s car emissions fraud scandal.

Germany will have to consider installing small new gas power plants in the 2020s to ensure power supply security as the country’s coal exit progresses, Patrick Graichen, head of the think tank Agora Energiewende*, told Georg Ehring in an interview with Deutschlandfunk. “These would be used during a few hours per year, but they would be available when there’s no wind or sun,” said Graichen. “From 2030 on, the world of storage will ensure supply security.”

For background, read the CLEW dossier The role of gas in Germany's energy transition.

Coalition between Conservatives and Greens in Bavaria possible

According to the latest polls, the Green Party could be the second-largest party in the October state elections in Bavaria, which would make possible a conservative-green coalition with the Christian Social Union (CSU), writes Die Welt. The Green’s co-top candidate in Bavaria Katharina Schulze signalled her openness towards a coalition with the CSU, writes Die Welt. “I didn’t go into politics to die in beauty on the sidelines,” said Schulze. 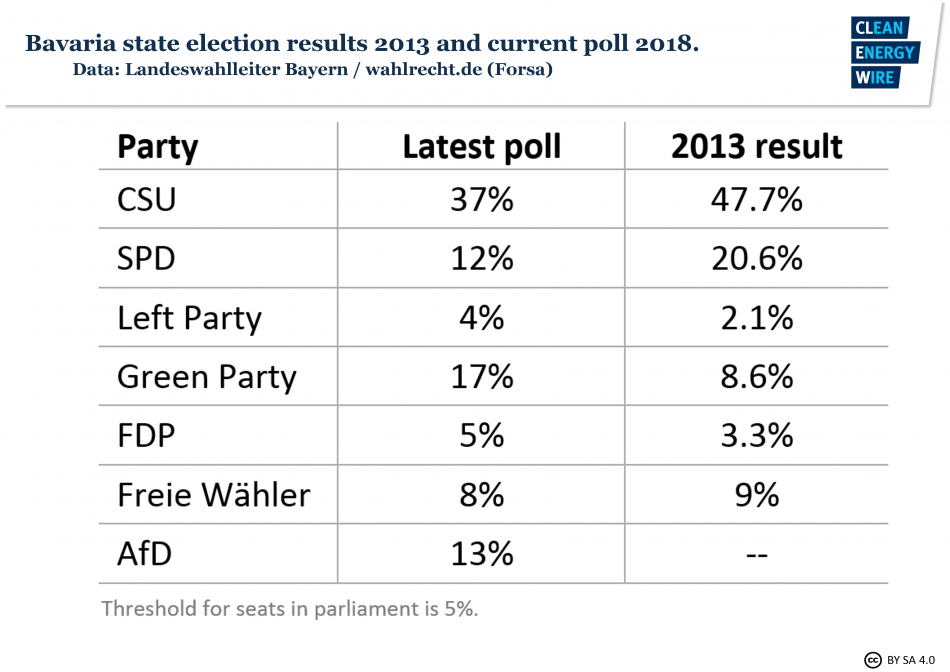 Mercator Research Institute on Global Commons and Climate Change (MCC) addresses the global coal phase-out in a new, short, overview policy brief. The main measures to help phase out coal are the abolishment of fossil-fuel subsidies, the introduction of sufficiently high international carbon prices, and the reduction of capital costs for renewables, it says.

Devising a plan for Germany’s coal exit through a commission is a tough job with many pitfalls for policymakers, Cecile Boutelet reports for Le Monde. Coal region Lusatia in eastern Germany is one example of a place “where the contradictory narratives of the country's energy and environmental policy add to the problems caused by reunification,” she writes. Everyone in the region knows that, sooner or later, coal is finished – but the precarious economic situation in eastern coal regions, the question of supply security and concerns of energy-intensive industries over rising power prices all weigh heavily on Germany’s emissions reduction goals. “Politically, coal is a time bomb,” Boutelet says, arguing that the far-right party AfD could gain from further de-industrialisation in eastern German coal areas, where state elections take place in autumn 2019. “But for the two big government parties [CDU/CSU and SPD], it’s getting more difficult: besides the AfD, the most dynamic party in polls are the Greens, who fight for a quick shutdown of the dirtiest coal plants,” she writes.

The rise in the price of carbon emissions, coal, and gas means that new onshore wind and solar can compete with the short term-costs of generating electricity from existing hard coal and gas plants for the first time, writes Dave Jones in an analysis for Sandbag. The lowest bids in German renewable auctions were around 38 euros per MWh, whereas coal generation costs have surged to around 46 euros, according to Sandbag. “The increasing competitiveness of renewables, against even existing coal and gas plants comes at an important time for the electricity transition in Europe,” writes Jones with reference to the German coal commission. The results do not apply to lignite, Germany's most important fossil power source, according to Sandbag.

Read the analysis in English here.

Germany’s cyber crime agency in the Federal Criminal Police Office (BKA) warns that attacks on energy providers in the country could lead to a Europe-wide blackout, news website Spiegel Online reports. According to an internal BKA document seen by Spiegel, cyber criminals have taken an interest in “critical infrastructure in Germany (especially energy supply)." The BKA warns that a targeted attack on German power plants could lead to a “knock-on effect” in other European countries and eventually let the continent’s entire power grid collapse. The agency says there is no imminent danger of an attack but urges authorities “to constantly monitor the abilities of attackers and to improve precautionary measures.”

See the CLEW dossier The energy transition and Germany’s power grid and the article Renewables could supply emergency power during blackouts for background.