“A Sunday almost without coal power”

German coal plants on last Sunday contributed the lowest amount of electricity to the country’s power mix ever recorded in recent times, energy think tank Agora Energiewende* said in a press release. Power production from coal and lignite plants stood at just 8 gigawatt (GW) at the lowest point, while power production from renewables peaked at over 55 GW on the sunny and windy Sunday, according to the think tank. Nuclear plants reduced their production to 5 GW, it added. Solar, wind and other renewable power production on average stood at nearly 36 GW during the weekend, equalling about 64 percent of German power consumption, Agora Energiewende explained. “Constellations like this will be perfectly normal in 2030,” the think tank’s head Patrick Graichen said, adding that “inflexible power plants no longer will have a place in the power system as they only spoil the prices”.

Read the press release in German here and an article on Deutsche Welle in English here. 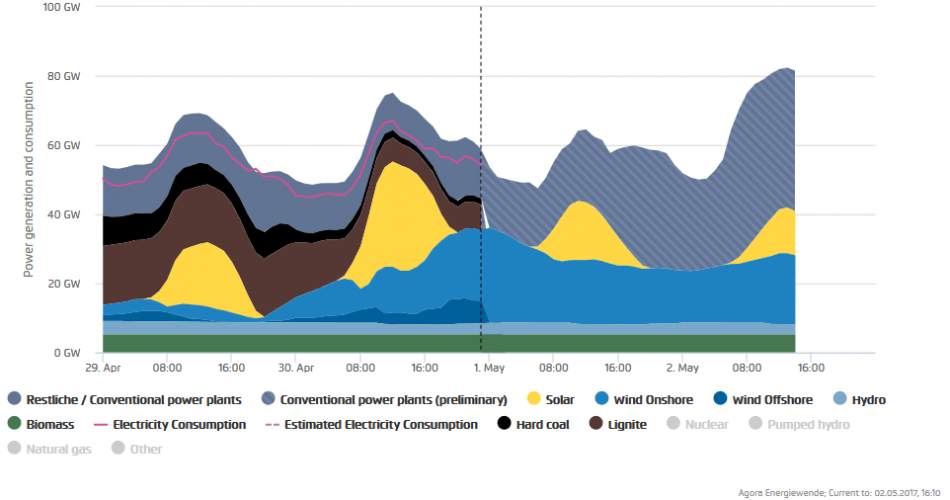 “E.ON and Google are launching partnership to expand solar energy”

Germany’s largest utility E.ON has struck a partnership with Google to expand its renewable energy business. E.ON will introduce Google’s solar platform Sunroof in Germany, the company said in a press release. The platform uses data from Google Earth to help homeowners to calculate savings from installing rooftop solar panels. Households can then directly order products such as pv modules from E.ON.

Read a Handelsblatt article on the partnership in English here.

Hamburg is the first German city to ban older diesel cars from main thoroughfares all year round to improve local air quality, reports Nils-Viktor Sorge for Spiegel Online. Even though only two roads are affected, the decision “has a highly symbolic significance. The discussion about possible driving bans has already sent shockwaves to the car industry”, writes Sorge.
A survey revealed this week that only two in five diesel car drivers plan to stick with the technology when buying their next car. Stuttgart, the home of carmakers Mercedes-Benz and Porsche, said earlier this year it would ban older diesel cars in the city centre when pollution is heavy from 2018.

“Volkswagen wants to step on the gas”

Volkswagen has launched a cooperation with utility E.ON, Gazprom, Total and other companies to increase Germany’s fleet of vehicles powered by natural gas tenfold to one million by 2025, reports Frankfurter Allgemeine Zeitung. “Its short-term availability makes natural gas an important component of our overall strategy for eco-friendly mobility of the future,” said Ulrich Eichhorn, head of Volkswagen research and development, in a press release. “Owing to the addition of methane from renewable resources, the propellant can gradually become even greener. This makes it an important constituent of the energy revolution in the transport sector in the long run, too.”

Volkswagen considers a publicity campaign in cooperation with other carmakers to improve the image of the diesel engine, CEO Matthias Müller told industry publication Automobilwoche. With reference to looming diesel bans in German cities, he said modern diesel engines were “part of the solution, not part of the problem”. Müller said carmakers will need the diesel engine to stay below CO2 emission limits.

German economy minister Brigitte Zypries opposes a quick end to lignite-fired power production in the country, Christian Grimm writes in an article for Dow Jones Newswires carried by website finanztreff.de. “We cannot afford to shut down the large lignite areas in Lusatia and North-Rhine Westphalia from one day to another,” Zypries said at a ceremonial act celebrating 40 years of national energy research in Berlin. A quick lignite exit would not be accepted by the local population, Zypries argued. The minister also said Germany had to “reconcile the economy with ecology” and make sure that energy-intensive industries did not leave the country due to constantly rising power costs.

See the CLEW factsheet When will Germany finally ditch coal? for background.

The German power grid will need more backup power plants to safeguard the system against blackouts during the next winter, the Federal Grid Agency (BNetzA) said in a press release. “We still need backup capacities to stabilise the grid in critical situations,” the agency’s head Jochen Homann said, adding that this showed the importance of a swift grid expansion. The BNetzA said grid operators will need reserves of about 1,600 megawatt (MW) additionally to those already available - bringing the total reserve capacity needed during winter 2017/2018 to 10,400 MW. Homann added that “there will be a significant relaxation next year”, explaining that Austria must manage bottlenecks to unburden the German grid.

See the CLEW dossier The energy transition and Germany’s power grid for background, and also consult the Factsheet How can Germany keep the lights on in a renewable energy future?

Financial support for pv installations in Germany has fallen slightly for plants starting operation in the second quarter of 2017, the Federal Grid Agency (BNetzA) said in a press release. Remuneration for small pv plants fell from 12.30 to 12.27 cents per kilowatt hour (kWh), because Germany only slightly missed its expansion target of 2,500 megawatt (MW) by adding about 2,150 MW of pv capacity. “The decrease is stronger if gross expansion exceeds the expansion corridor,” the agency said, adding that “a significant undershooting would instead lead to higher remuneration rates”.

For more information, see the CLEW factsheet Germany ponders how to finance renewables expansion in the future.

Federal Ministry for the Environment

German environment minister Barbara Hendricks will travel to Washington from May 15-17 to meet her US counterpart, EPA head Scott Pruit, and talk about climate and environmental protection, the Federal Ministry for the Environment (BMUB) said in a press release. Hendricks said she wanted to “get in touch with the new administration” and would “especially urge the US to remain a party to the Paris Climate Agreement”. Hendricks will also meet with California’s governor Jerry Brown to discuss the growing importance of subnational entities like federal states, cities and regions in advancing climate protection, according to the ministry.