Technical fixes, better communication and smoother planning procedures are to accelerate Germany’s grid expansion, the energy minister has proposed in a new plan. Heading off on a visit to contested power line building sites in western Germany, minister Peter Altmaier said having a modernised power grid was as essential to the energy transition as the roll-out of renewables.

Germany’s Minister for Economic Affairs and Energy, Peter Altmaier presented his “Power Grid Action Plan” today. The plan is the highly anticipated move to tackle the problem of grid congestion in Germany, as the north of the country produces more wind power than it can use. The current high-voltage transmission lines are not up to the job of transporting the power to industrial centres in the south, causing numerous problems for both Germany and its neighbours.

“When it comes to the grid expansion, Germany is lagging behind, this causes costs for consumers,” Altmaier said at a press conference in Bonn.

In the new plan, the minister has proposed technical fixes aimed at more efficient use of existing power lines, as well as measures to streamline planning procedures for new infrastructure.

The future of the energy transition – Germany’s phase-out of nuclear and fossil fuels and switch to an energy system largely based on renewables – is widely seen as hinging on the construction of new cross-country high-voltage direct current (HVDC) power lines.

When the current government came into power earlier this year, it made further expansion of renewable power sources contingent on the power grid's capacity to actually transport this additional electricity.

“For a successful energy transition, we need modern and well-built power grids as much as the expansion of renewable energies,” Altmaier said today.

In 2017, bottlenecks resulted in 1.4 billion euros in grid-stabilising costs, with grid operators forced to shut down wind turbines in the event of high winds in the north and east of the country.

Jochen Homann, president of the Federal Network Agency (BNetzA) said it was important for grid development to keep pace with the addition of more renewable energy capacity. “The grid expansion must not become the bottleneck of the energy transition,” he said. 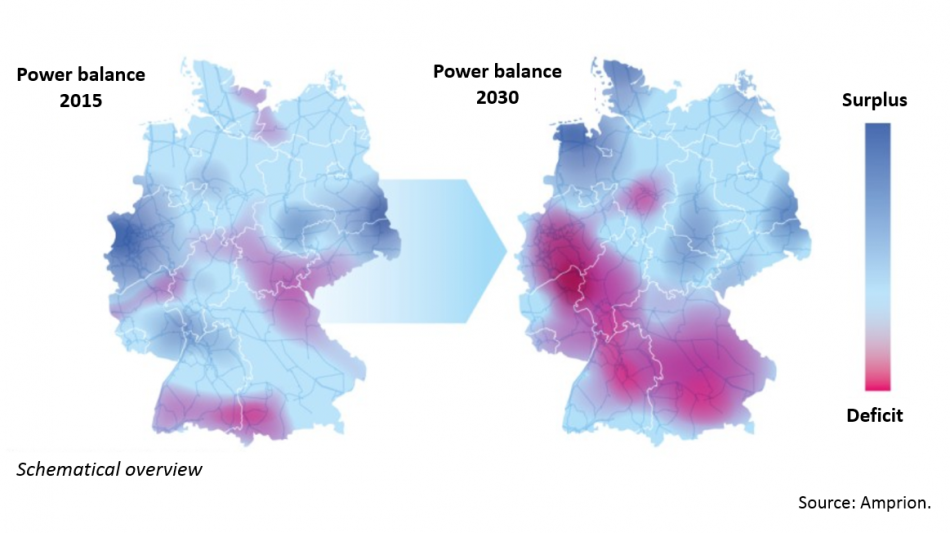 The action plan says updating transmission grids with technology allowing operators to use them more flexibly and run more power through them could lower the costs of stabilising the grid and bridge the gap until new HVDC lines are completed in 2025,

To streamline planning for new lines, the minister wants to put a new procedure in place involving his ministry, the Federal Network Agency (BNetzA), grid operators and state governments, which would share information and meet regularly to “identify obstacles and risks to the schedule”.

The new approach would also involve determining at every meeting “who will do what and by when?” the paper says.

In autumn 2018, the ministry plans to amend the existing “grid expansion acceleration law” (NABEG), to make the process of refurbishing existing power lines less bureaucratic. This will include reducing the involvement of state administration in the planning process, enabling the first part of a new line to be built before the final stretch has secured planning permission, and laying extra tubing for underground cables in case they are needed in the future.

In a statement on the new plan, SPD energy politician Johann Saathoff said that waiting with the law proposal till autumn would delay things further and cause hundreds of millions of additional grid congestion costs.

The ministry will also try to put more financial pressure on grid operators to complete new projects in time, although the plan itself says this will be its most difficult task.

Altmaier announced in his first speech to the federal parliament (Bundestag) as economics and energy minister in March that he would “know every problematic line personally and have visited it” within his first six months in office. Ever since, critics have accused him of doing very little to advance the Energiewende.

“Unfortunately it [the grid expansion] is making progress at a snail's pace,” Stefan Kapferer, head of energy industry association BDEW said this week. Today, Kapferer said that Altmaier’s plan was containing important measures to enable an effective use and expansion of the grid. “But what I am bitterly missing are concrete and reliable time frames for the implementation of these measures. What we need is not only more speed in grid expansion but also in law making,” Kapferer added.

The opposition Green and Die Linke parties have been quick to remind Altmaier that delayed grid expansion shouldn’t be used as an excuse to slow down renewable development, and that phasing out of coal-fired power production was neccessary to relieve pressure on the grid.

Olaf Lies (SPD), energy minister of the state of Lower Saxony where Altmaier will visit grid projects on Wednesday, said that he expected the minister to make it clear that he was supporting a raised renewable development goal of 65 percent by 2030. “The federal government has to finally abandon its blockage of the energy transition and shape reliable framework conditions for all actors,” Lies said. Because of the “blockage” and a resulting slow-down in demand for wind energy installations, wind power company Enercon was making people redundant in Lower Saxony this year, he said. 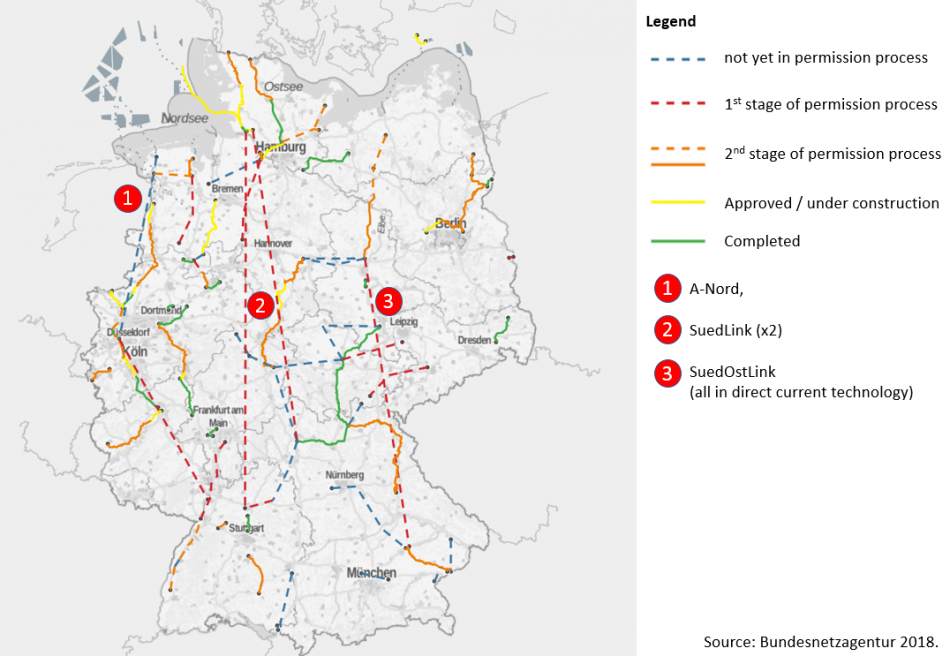 Of the 7,700 kilometres of power lines that have to be either refurbished (ca. 3050 km) or newly constructed (ca. 4,650 km), 1,750 kilometres have received planning permission and 950 kilometres have been built, the Federal Network Agency’s figures show.

This is just fraction of the 35,000 kilometres of power lines that make up Germany’s transmission grid. But the four new HVDC lines in particular are needed urgently to prevent a serious imbalance between power generation (in the north) and consumption (in the south) once the last nuclear power plant in the power-hungry south closes in 2022.

Over the next two days, Altmaier will visit construction sites for the new power lines in North-Rhine Westphalia and Lower Saxony, talking to grid operators and the general public.

Dispelling public concerns about both overland and underground cables is seen as crucial to completion of the new power lines by 2025, since protests and legal challenges could further delay the project.

In 2015, the federal government decided to prioritise expensive underground cables over the more common overhead lines, in a bid to appease citizen protests against large new pylons, their impact on the landscape and fears of “electro-smog”.

However, some municipalities are now applying for overhead lines because of concerns over the effects of underground cables on arable land.

As Altmaier began his grid trip, the Nature and Biodiversity Conservation Union (NABU) said it would fight for grid expansion that was as environmentally friendly as possible. Other citizens' initiatives reiterated their demand for a decentralised energy system that could avoid the need for many new power lines altogether.