Renewables surcharge set to fall by six percent in 2019 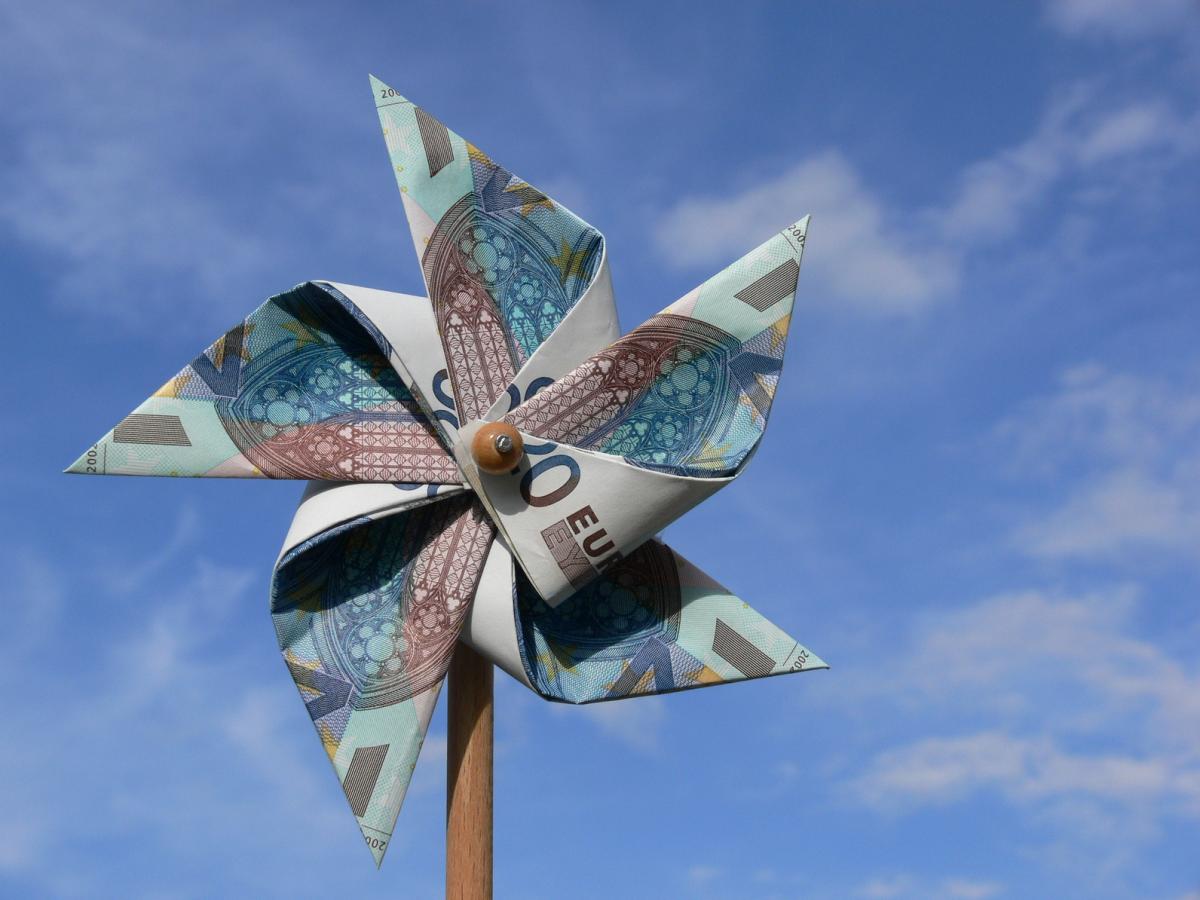 Germany’s renewable energy surcharge that is paid by consumers with their electricity bill and supports wind, solar, biomass and hydro power installations, is to fall by 5.7 percent in 2019, transmission grid operators have calculated. A higher wholesale electricity price and decreasing costs of new installations are going to curb overall costs despite the fact that increasing amounts of wind energy will enter the system.

A sharp rise in the wholesale power price leads to lower support payments to renewable energy installations in 2019, Germany’s transmission grid operators said on 15 October. Despite a larger amount of particularly onshore and offshore wind power entering the system, the renewables surcharge will fall to 6.405 cents per kilowatt hour (ct/kWh), down by 5.7 percent compared to 2018.

Federal energy minister Peter Altmaier said that this development was due to the switch to a tender system for renewables in 2017. “Newly installed renewable energies need less and less support. This is good news for the energy system transformation, because we are showing that ecology and economy can go hand in hand.”

While renewable groups hailed the fallen surcharge as a success ascribable to the (rising) European CO2 price (EU ETS), industry and consumer representatives said that a reducing effect on actual power prices was unlikely.

The higher market price for power also sees the first new renewable energy plants operating without any support. “In the beginning of the 2020s, the very expensive old renewable installations will stop receiving funding and at the same time the phase-out of nuclear and coal power will continue, so more and more new renewables installations will run without the need for additional payments,” Marco Nicolosi, an analyst at Connect Energy Economics, commented on 12 October.

Renewables surcharge falls for second year in a row

As part of Germany’s transition to an energy system largely based on renewable power (Energiewende), consumers pay a renewables surcharge (EEG-Umlage) with their electricity bill. In 2018, the EEG surcharge made up 23 percent of the power price paid by an average household. Although the amount of renewable power has increased by 50 percent since 2014, the renewables surcharge has remained roughly stable since then, the Federal Network Agency (BNetzA) said. 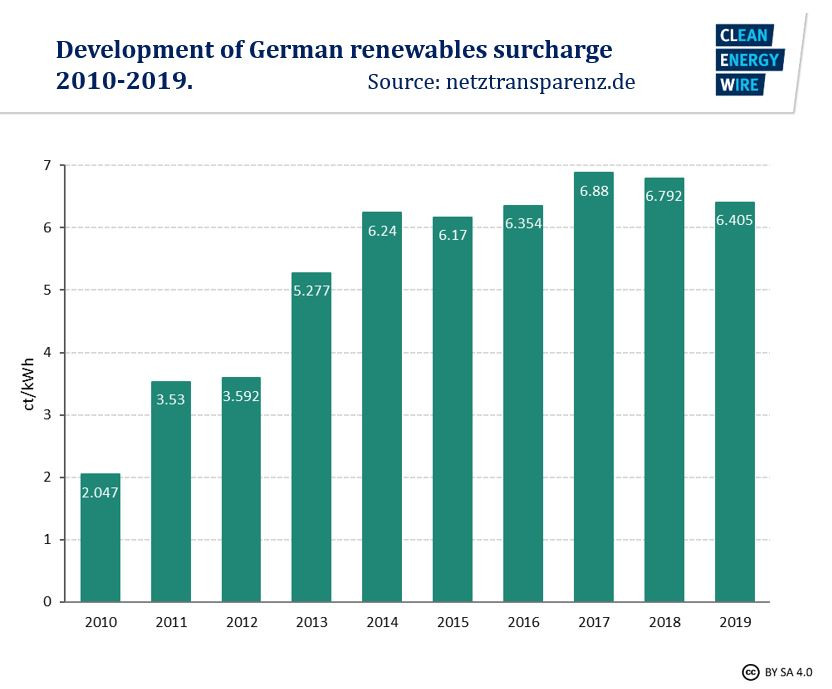 German renewable energy installations, such as solar PV, wind, and biogas plants, receive support payments, which are calculated as the difference between a guaranteed payment (formerly set by parliament, now determined in auctions) and the wholesale electricity price. Therefore, higher wholesale prices at the electricity exchange lead to lower payments to renewable installations.

Katharina Reiche, head of the executive board of the German Association of Local Utilities (VKU), explained that the tenders for renewable energy projects contributed to this stabilisation. “They have led to more competition and a more cost-efficient expansion of renewables,“ she said.

For the annual production of 204 terawatt-hours (TWh) of electricity, renewable energy installations will receive 25.6 billion euros in support in 2018.

Grid operators expect six gigawatt (GW) of added renewables capacity in 2019. Renewables generation, especially from new onshore and offshore wind turbines, is predicted to increase by 13 TWh in 2019 (to 217 TWh, equalling around 24.8 billion euros in support), overall payments are to fall due to higher wholesale power prices and to some 3.65 billion euros saved in the so-called green energy account.

Wholesale power prices have risen by 37 percent compared to 2017, the grid operators said. All predictions are subject to change due to power demand or the weather, as for example very sunny years lead to higher payments to solar installations.

Despite the good news that the EEG surcharge will be lower next year, price comparison websites and industry associations have both warned that this will not translate into lower prices for everyone. “One cost element is currently falling slightly, but another is rising very significantly - as has been the case for some time with grid costs,” said Holger Lösch, managing director of the industry association BDI, in a press release. While energy-intensive companies are exempt from paying the EEG surcharge, smaller companies and households both pay the full amount. The Federal Network Agency says that the average power price for German households has increased by 0.4 percent per year since 2013. 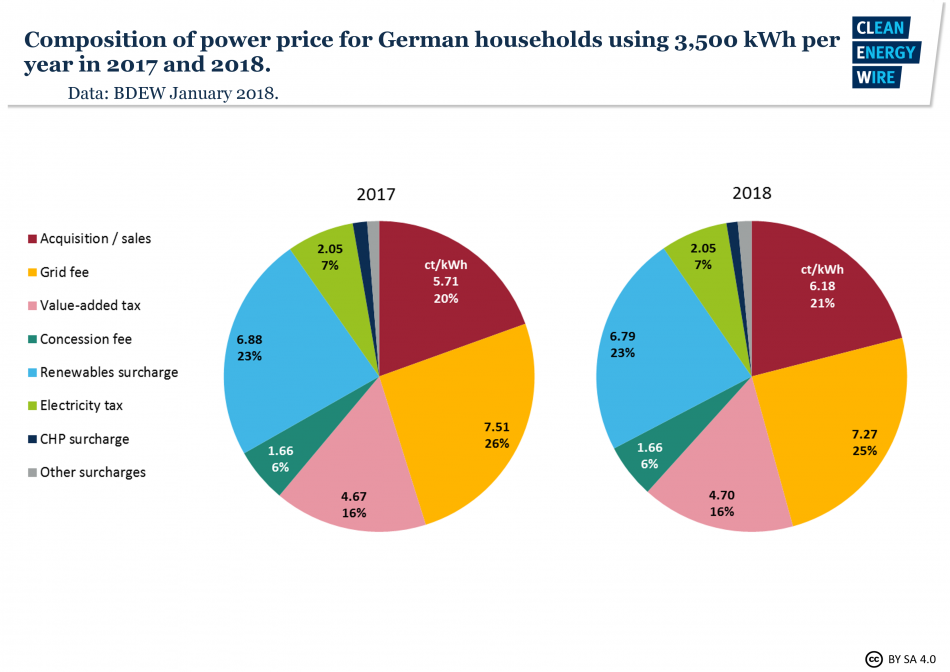 One of the main reasons why wholesale prices for electricity have been increasing is the record high European Emission Allowance (EUA) prices this year, Robert Busch, managing director of the Association of Energy Market Innovators (BNE), said. "This example from the electricity market shows how a CO2 price signal can work.”

The rising stock market price also means that the first renewables installations don’t need any support at all anymore, the German Renewable Energy Federation (BEE) has said. The BEE cited the example of a new solar PV installation in Wittstock, which won an auction with 5.42 ct/kWh. As long as the wholesale power price is below this value, the installation continues to receive the difference as market premium. But since the wholesale price rose to over 5.5 ct/kWh in August, the Wittstock PV plant obtained its revenue entirely from the market price, and it did not need support. “With this, the guaranteed support payment is turning into nothing more than risk protection,” BEE head Peter Röttgen said. 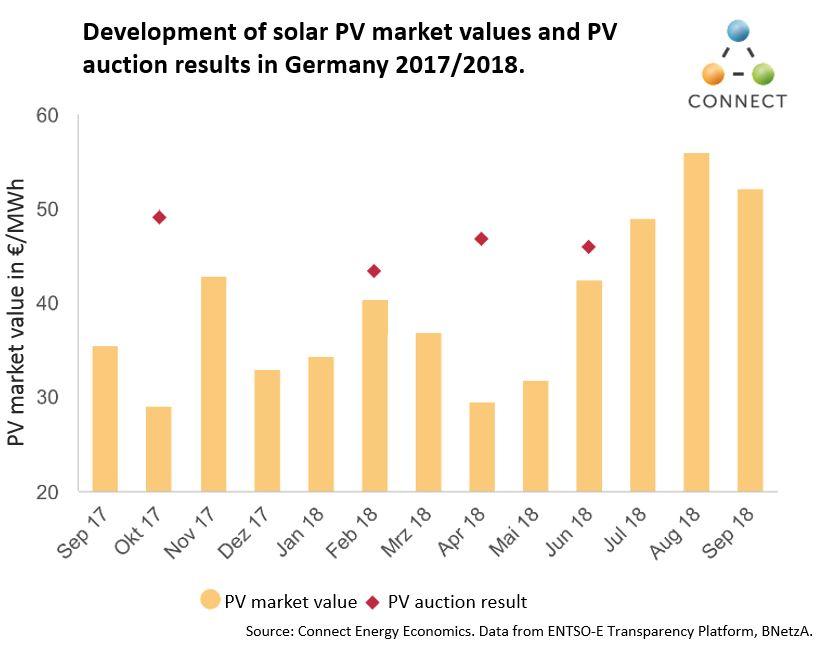 Marco Nicolosi said at a BEE press conference that if wholesale power prices increased further – which is predicted to happen because of the higher EU ETS prices and the phase-out of nuclear and coal power – more and more new renewable energy installations would run without the need for premium payments.

“Renewables are starting to dip their toe into the market. With the auctions they are becoming more professional at predicting their future revenues and market developments,” Nicolosi told the Clean Energy Wire.