Wind and solar power, together with other renewable sources, have overtaken coal as Germany’s most important power source, figures released by the industry group BDEW show. But this milestone in the history of the country’s energy transition must be taken with a pinch of salt, experts warn. The goal to further boost the share of renewables during the next decade is threatened by lagging grid expansion, political indecision, and fears over wavering supply security. All these make it difficult for renewable power companies to plan their next steps in the Energiewende process.

Renewable energy generation in Germany passed an important milestone in the first half of 2018, becoming the single largest power source ahead of coal in the country’s gross power production mix. Figures released by the German Association of Energy and Water Industries (BDEW), the energy industry’s biggest lobby group, show that wind, solar, and other renewable energy sources together generated 118 billion kilowatt hours (kWh) of electricity between January and the end of June, compared to 114 kilowatt hours generated from lignite and hard coal over the same period.

“Renewables are on the march,” BDEW head Stefan Kapferer said, adding that the figures demonstrate that a market-driven coal exit in Germany “is already fully on its way.” Kapferer said the growing share of renewables makes an accelerated power grid expansion in Germany more necessary than ever before. The aim here is to integrate more intermittent renewable power sources into the energy system, he explained. The lobby group leader warned that Germany still lacks a reliable backup system for periods of low renewable energy output, and added that this problem is set to intensify as more coal plants are shut down. In addition, the country’s last nuclear power plant is scheduled for decommissioning in 2022. 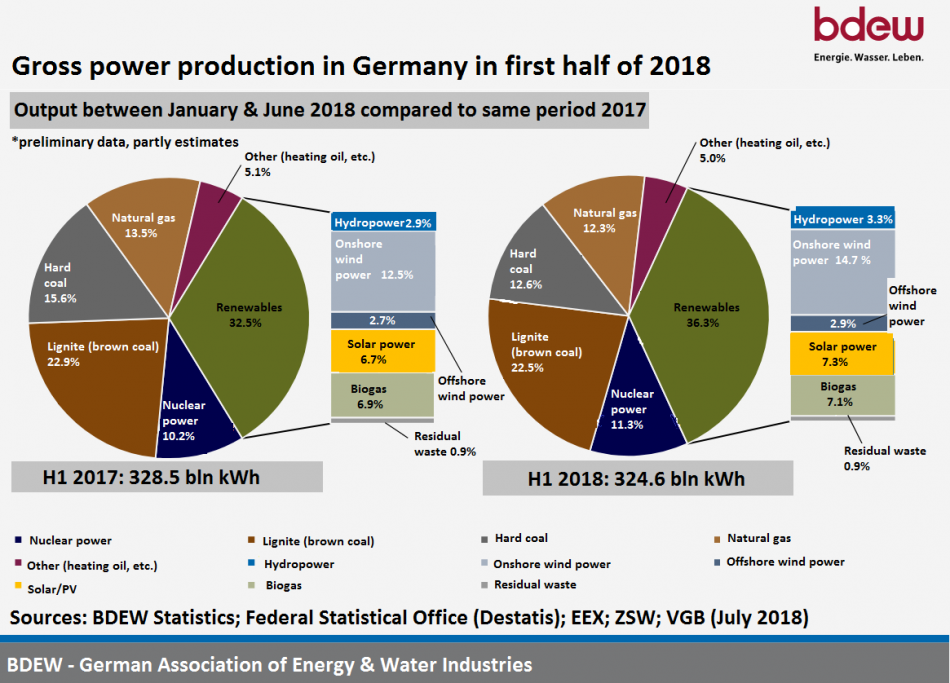 The BDEW estimates that renewable energy sources increased their output by ten percent between the first half of 2017 and the same period one year later, raising their share in the power mix from 32.5 percent to 36.3 percent in 2018. Onshore wind power saw the biggest increase of all renewable sources, bringing its share in output up from 12.5 to 14.7 percent in one year. Power generation from hard coal dropped significantly from 15.6 percent to 12.6 percent, and that from lignite decreased slightly, from 22.9 to 22.5 percent. The use of gas dropped by more than one percentage point to 12.3 percent of the gross power production mix, while that of nuclear energy grew by one percentage point to 11.3 percent, the BDEW said.

The new figures on the changes in Germany’s power mix in the framework of its Energiewende - the dual shift from fossil and nuclear energy sources to renewables - come at a time when the political debate on phasing out coal is already in full swing. The government launched a highly anticipated coal exit commission in June. It is tasked with managing the definite phase-out of Germany’s historically most important power source without causing major economic disruptions in the affected regions.

“Others are much more advanced"

Environmental groups and opposition parties argue for a rapid shutdown of many coal plants and an end to coal mining to bring Germany back on track towards meeting its 2020 and 2030 climate goals [see the CLEW factsheet on Germany’s greenhouse gas emissions and climate targets for background], but coal proponents say that the coal mines are legally entitled to remain operational well into the 2040s, and that a rapid coal exit would threaten economic stability in the regions and could lead to diminished supply security and rising power prices in the entire country.

In a bid to bridge the emissions gap by 2030, the government coalition of Chancellor Angela Merkel’s conservative CDU/CSU alliance and the Social Democrats (SPD) has promised to increase the share of renewables in power consumption to 65 percent by the end of the next decade. While the BDEW’s figures on gross power production, as well as the figures contained in the research institute Fraunhofer ISE’s Energy Charts on net output, indicate that the share of renewables is growing steadily, and an analysis conducted by the think tank Agora Energiewende* has recently confirmed that reaching 65 percent is technically feasible, the country’s renewable energy lobby groups warn that the goal is at risk for several reasons. [See the CLEW factsheet Germany’s energy consumption and power mix in charts for more information]

Germany’s government has come under fire lately from environmental groups and industry representatives alike, as an internal quarrel within the conservative CDU/CSU camp over immigration has been seen as paralysing other areas, such as energy and climate policy. The government’s energy policy advisor group has also found that the Energiewende does not enjoy the political priority it deserves.

The Green Party’s energy politician Julia Verlinden said in a press statement that while the figures gave reason to cheer, they should not disguise the fact that other countries have a much greater share of renewables. “Others are much more advanced here – renewables expansion is not happening quick enough,” she said. Verlinden added that the share of renewables in heating and transport has remained stagnant on a low level for ten ears and that Germany is set to miss its 2018 goal of 18 percent renewables in total energy consumption.

The German Renewable Energy Federation (BEE) says that the government’s most important task would be to come up with clear guidelines for additional renewables auctions to enable the country to reach its 2030 renewables target, especially since the approaching end of their 20-year guaranteed support scheme means that a lot of renewable power capacity could go off the grid in the next few years.

*Like the Clean Energy Wire, Agora Energiewende is funded by Stiftung Mercator and the European Climate Foundation.